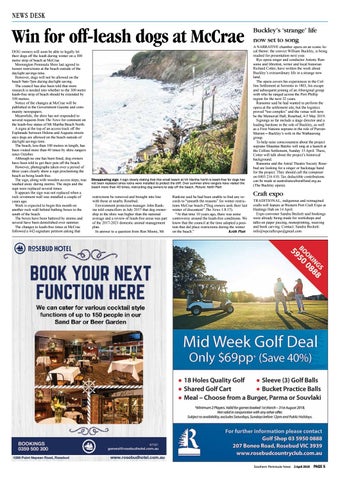 Win for off-leash dogs at McCrae DOG owners will soon be able to legally let their dogs off the leash during winter on a 300 metre strip of beach at McCrae. Mornington Peninsula Shire last agreed to loosen restrictions at the beach outside of the daylight savings time. However, dogs will not be allowed on the beach 9am-7pm during daylight saving. The council has also been told that more research is needed into whether to the 300 metre leash-free strip of beach should be extended by 350 metres. Notice of the changes at McCrae will be published in the Government Gazette and community newspapers. Meanwhile, the shire has not responded to several requests from The News for comment on the leash-free status of Mt Martha Beach North. A signs at the top of an access track off the Esplanade between Helena and Augusta streets says dogs are allowed on the beach outside of daylight savings time. The beach, less than 100 metres in length, has been visited more than 40 times by shire rangers since October. Although no one has been fined, dog owners have been told to get their pets off the beach. However, photographs taken over a period of three years clearly show a sign proclaiming the beach as being leash-free. The sign, along with wooden access steps, was washed away during storms. The steps and the sign were replaced several times. It appears the sign was not replaced when a rock revetment wall was installed a couple of years ago. Work is expected to begin this month on another rock wall behind bathing boxes to the south of the beach. The boxes have been battered by storms and several have been demolished over summer. The changes to leash-free times at McCrae followed a 442-signature petition asking that

Disappearing sign: A sign clearly stating that this small beach at Mt Martha North is leash-free for dogs has not been replaced since rocks were installed to protect the cliff. Over summer shire rangers have visited the beach more than 40 times, instructing dog owners to stay off the beach. Picture: Keith Platt

restrictions be removed and brought into line with those at nearby Rosebud. Environment protection manager John Rankine told councillors in July 2017 that dog ownership in the shire was higher than the national average and a review of leash-free areas was part of the 2017-2021 domestic animal management plan. In answer to a question from Ron Moore, Mr

Rankine said he had been unable to find any records to “unearth the reasons” for winter restrictions McCrae beach (“Dog owners seek their last winter of discontent” The News 1.8.17). “At that time 10 years ago, there was some controversy around the leash-free conditions. We know that the council at the time adopted a position that did place restrictions during the winter on the beach.” Keith Platt

Buckley’s ‘strange’ life now set to song A NARRATIVE chamber opera on an iconic local theme: the convict William Buckley, is being readied for presentation next year. Rye opera singer and conductor Antony Ransome and librettist, writer and local historian Richard Cotter, have written the work about Buckley’s extraordinary life in a strange new land. The opera covers his experiences in the Collins Settlement at Sorrento in 1803, his escape and subsequent joining of an Aboriginal group with who he ranged across the Port Phillip region for the next 32 years. Ransome said he had wanted to perform the opera at the settlement site, but the logistics proved “too complex” and the venue will now be the Memorial Hall, Rosebud, 4-5 May 2019. Signings so far include a stage director and a leading baritone in the role of Buckley, as well as a First Nations soprano in the role of PurranMurnin – Buckley’s wife in the Wathaurong group. To help raise consciousness about the project soprano Shauntai Batzke will sing at a launch at the Collins Settlement, Sunday 15 April. There, Cotter will talk about the project’s historical background. Ransome and the Astral Theatre Society Rosebud are looking for a singer or backstage hand for the project. They should call the composer on 0403 216 410. Tax deductible contributions can be made at australianculturalfund.org.au (The Buckley opera).