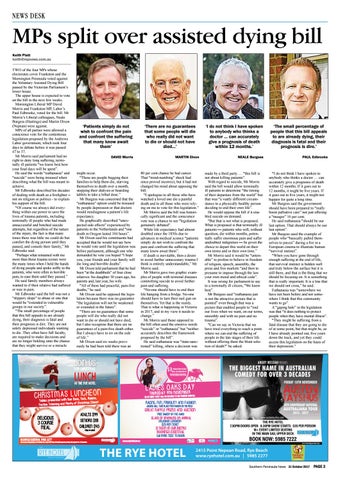 MPs split over assisted dying bill Keith Platt keith@mpnews.com.au TWO of the four MPs whose electorates cover Frankston and the Mornington Peninsula voted against the Voluntary Assisted Dying Bill passed by the Victorian Parliament’s lower house. The upper house is expected to vote on the bill in the next few weeks. Mornington Liberal MP David Morris and Frankston MP, Labor’s Paul Edbrooke, voted for the bill. Mr Morris’s Liberal colleagues, Neale Burgess (Hastings) and Martin Dixon (Nepean) were against. MPs of all parties were allowed a conscience vote for the contentious legislation proposed by the Andrews Labor government, which took four days to debate before it was passed 47 to 37. Mr Morris said parliament had no right to deny long suffering, terminally ill patients “we know best how your final days will be spent”. He said the words “euthanasia” and “suicide” were being misused when describing what the bill was meant to achieve. Mr Edbrooke described his decades of dealing with death as a firefighter – not on religion or politics - to explain his support of the bill. “Of course we always did everything within our power to save the lives of trauma patients, including terminally ill people who had made unsuccessful and botched suicide attempts, but regardless of the nature of the injury, the fact is that many times there was little we could do but comfort the dying person until they passed, and console their family,” Mr Edbrooke said. “Perhaps what remained with me more than those trauma scenes were the many times when I held the hands of dying people and spoke softly to the patients, who were often in horrible pain, to ease them until they passed.” He said family members always wanted to if their relative had suffered or was in pain. Mr Edbrooke said the bill was not a “slippery slope” to abuse or one that would be “extended to vulnerable groups in our society”. “The small percentage of people that this bill appeals to are already dying, their diagnosis is fatal and their prognosis is dire. They are not solely depressed individuals wanting to die. They often have full faculty, are required to make decisions and are no longer holding onto the chance that they might survive or a miracle

might occur. “These are people begging their families to help them die, starving themselves to death over a month, stopping their dialysis or hoarding tablets to take a lethal dose.” Mr Burgess was concerned that the “euthanasia” option could be misused by people depression or that doctors would misdiagnose a patient’s life expectancy. He graphically described “unexpected side effects” experienced by patients in the Netherlands and “one death in Oregon lasted 104 hours”. Mr Dixon said his constituents had accepted that he would not say how he would vote until the legislation was before parliament, although one who demanded he vote yes hoped “I hope you, your friends and your family will die long and horrible deaths”. Mr Dixon told parliament that he had been “at the deathbeds” of four close relatives: his daughter 30 years ago, his parents and, last year, his wife. “All of them had peaceful, pain-free deaths,” he said. Mr Dixon said he opposed the legislation because there was no guarantee “the legislation will not be weakened or extended in the future”. “There are no guarantees that some people will die who really did not want to die or should not have died, but I also recognise that there are no guarantees of a pain-free death either. But I always have to err on the side of life.” Mr Dixon said six weeks previously he had been told there was an

‘There are no guarantees that some people will die who really did not want to die or should not have died...’

‘I do not think I have spoken to anybody who thinks a doctor … can accurately give a prognosis of death within 12 months.’

‘The small percentage of people that this bill appeals to are already dying, their diagnosis is fatal and their prognosis is dire.’

80 per cent chance he had cancer. That “mind-numbing” shock had since proved incorrect, but it had not changed his mind about opposing the bill. “I apologise to all those who have watched a loved one die a painful death and to all those who were relying on me to vote for this legislation.” Mr Morris said the bill was historically significant and the conscience vote was a chance to see “legislation genuinely debated”. While life expectancy had almost doubled since the 1850s due to advances in medical science “patients simply do not wish to confront the pain and confront the suffering that many know await them”. If death is inevitable, then a desire to avoid further unnecessary trauma I think is entirely understandable,” Mr Morris said. Mr Morris gave two graphic examples of people with terminal diseases committing suicide to avoid further pain and suffering. “No-one should have to end their life hanging from a bridge. No-one should have to turn their nail gun on themselves. Yet that is the reality. That is what is happening in Victoria in 2017, and in my view it needs to change.” Mr Morris said those opposed to the bill often used the emotive words “suicide” or “euthanasia” but “neither accurately describes the framework proposed by the bill”. He said euthanasia was “state-sanctioned” killing, where a decision was

made by a third party … “this bill is not about killing patients”. With regard to suicide, Mr Morris said the bill would allow terminally ill patients to determine “the timing of their departure from the world” but that was “a vastly different circumstance to a physically healthy person deciding to end their own life”. He would oppose the bill if it enabled suicide on demand. “But that is not what is proposed. What is proposed is that terminally ill patients — patients who will, without question, die within months, potentially suffer enormous pain and suffer undoubted indignities — be given the choice to depart this world on their own terms and in their own time.” Mr Morris said it would be “untenable” to profess to believe in freedom of religion, speech, assembly, the press and free markets “and then to presume to impose through the law your own moral and ethical code”. It was wrong for parliament to say to a terminally ill citizen, “We know best”. Mr Burgess said “euthanasia just is not the attractive picture that is painted” even though that was a picture that enabled people to “end our lives when we want, on our terms, smoothly and with no pain and no trauma”. “Can we say in Victoria that we have tried everything to reach a point where we can end the suffering of people in the late stages of their life without offering them the blunt solution of death?” he asked.

“I do not think I have spoken to anybody who thinks a doctor … can accurately give a prognosis of death within 12 months. If it goes out to 12 months, it might be five years. If it goes out to five years, it might not happen for quite a long time. Mr Burgess said the government should have been prepared to “really boost palliative care” not just offering a “meagre” 16 per cent. He said euthanasia “should be our last option. That should always be our last option”. Mr Burgess used the example of people who “basically pulled themselves to pieces” during a fire in a European cinema to illustrate human “survival instinct”. “When you have gone through enough suffering at the end of life, that survival instinct is hidden well and truly below the surface but it is still there, and that is the thing that we should be focusing on. It is something that is really important. It is a line that we should not cross,” he said. Euthanasia was “somewhere we have not been before and not somewhere I think that this community wants to go”. A “gaping hole” in the legislation was that “it does nothing to protect people when they have mental illness”. “They might be suffering from a fatal disease that they are going to die of at some point, but that might be, as I have already pointed out, five years down the track, and yet they could access this legislation on the basis of their depression.”