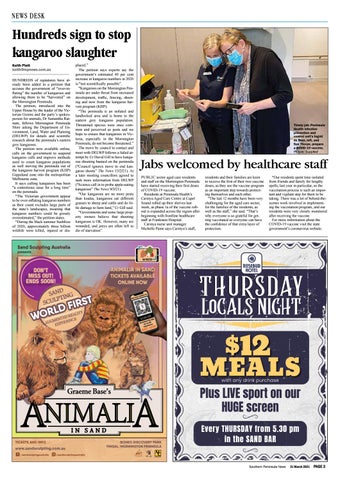 Hundreds sign to stop kangaroo slaughter Keith Platt keith@mpnews.com.au HUNDREDS of signatures have already been added to a petition that accuses the government of “over-inflating” the number of kangaroos and allowing them to be “harvested” on the Mornington Peninsula. The petition, introduced into the Upper House by the leader of the Victorian Greens and the party’s spokesperson for animals, Dr Samantha Ratnam, follows Mornington Peninsula Shire asking the Department of Environment, Land, Water and Planning (DELWP) for details and scientific research about the peninsula’s eastern grey kangaroos. The petition now available online, calls on the government to suspend kangaroo culls and improve methods used to count kangaroo populations as well moving the peninsula out of the kangaroo harvest program (KHP) Gippsland zone into the metropolitan Melbourne zone. It says culling kangaroos has been “a contentious issue for a long time” on the peninsula. “The Victorian government appear to be over-inflating kangaroo numbers as their count excludes large parts of the state’s landscapes, meaning that kangaroo numbers could be grossly overestimated,” the petition states. “During the black summer bushfires of 2020, approximately three billion wildlife were killed, injured or dis-

placed.” The petition says experts say the government’s estimated 40 per cent increase in kangaroo numbers in 2020 is “not scientifically possible”. “Kangaroos on the Mornington Peninsula are under threat from increased development, traffic, fencing, shooting and now from the kangaroo harvest program (KHP). “The peninsula is an isolated and landlocked area and is home to the eastern grey kangaroo population. Threatened species were once common and perceived as pests and we hope to ensure that kangaroos in Victoria, especially in the Mornington Peninsula, do not become threatened.” The move by council to contact and meet with DELWP follows a failed attempt by Cr David Gill to have kangaroo shooting banned on the peninsula (“Council ignores move to end kangaroo shoots” The News 15/2/21). At a later meeting councillors agreed to seek more information from DELWP (“Science call in to probe apple-eating kangaroos” The News 9/3/21). “Our kangaroos are no more pests than koalas; kangaroos eat different grasses to sheep and cattle and do little damage to farm land,” Cr Gill said. “Governments and some large property owners believe that shooting kangaroos is OK. However, many are wounded, and joeys are often left to die of starvation”.

residents and their families are keen to receive the first of their two vaccine doses, as they see the vaccine program as an important step towards protecting themselves and each other. “The last 12 months have been very challenging for the aged care sector, for the families of the residents, as well as the staff,” she said. “That’s why everyone is so grateful for getting vaccinated so everyone can have the confidence of that extra layer of protection.

“Our residents spent time isolated from friends and family for lengthy spells, last year in particular, so the vaccination process is such an important and vigilant step for them to be taking. There was a lot of behind-thescenes work involved in implementing the vaccination program, and our residents were very closely monitored after receiving the vaccine. For more information about the COVID-19 vaccine visit the state government’s coronavirus website.

with any drink purchase

Plus LIVE sport on our HUGE screen Every THURSDAY from 5.30 pm in the SAND BAR