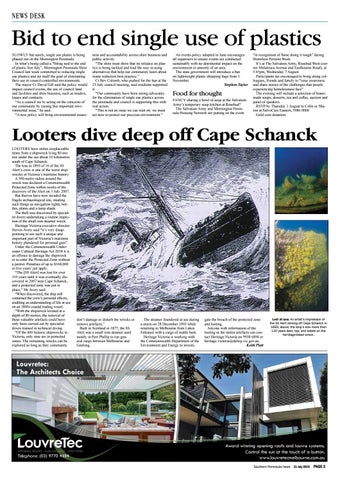 Bid to end single use of plastics SLOWLY but surely, single use plastic is being phased out on the Mornington Peninsula. In what’s being called a “fitting nod to the end of plastic free July”, Mornington Peninsula Shire Council last week committed to reducing single use plastics and set itself the goal of eliminating their use in council-controlled environments. The mayor Cr David Gill said the policy would impact council events, the use of council land and facilities and shire business, such as tenders, leases and contracts. “As a council we’re acting on the concerns of our community by raising this important environmental issue,” he said. “A new policy will bring environmental aware-

ness and accountability across shire business and public activity. “The shire must show that its reliance on plastics is being tackled and lead the way in using alternatives that help our community learn about waste reduction best practice.” Cr Bev Colomb, who pushed for the ban at the 23 July council meeting, said residents supported it. “Our community have been strong advocates for the elimination of single use plastics across the peninsula and council is supporting this with real action. “This is not an issue we can wait on: we must act now to protect our precious environment.”

An events policy adopted in June encourages all organisers to ensure events are conducted sustainably with no detrimental impact on the environment or amenity of an area. The state government will introduce a ban on lightweight plastic shopping bags from 1 November. Stephen Taylor

Food for thought FANCY sharing a bowl of soup at the Salvation Army’s temporary soup kitchen at Rosebud? The Salvation Army and Mornington Peninsula Housing Network are putting on the event

“in recognition of those doing it tough” during Homeless Persons Week. It’s at The Salvation Army, Rosebud West (corner Melaleuca Avenue and Eastbourne Road), at 5.45pm, Wednesday 7 August. Participants are encouraged to bring along colleagues, friends and family to “raise awareness and share stories of the challenges that people experiencing homelessness face”. The evening will include a selection of homemade soups, desserts, tea and coffee, auction and panel of speakers. RSVP by Thursday 1 August to Colm or Sharon at SalvoCare Eastern, 5986 0000 Gold coin donation.

Looters dive deep off Cape Schanck LOOTERS have stolen irreplaceable items from a shipwreck lying 80 metres under the sea about 10 kilometres south of Cape Schanck. The loss in 1893 of 16 of the SS Alert’s crew is one of the worst shipwrecks in Victoria’s maritime history. A 500-metre radius around the wreck was declared a Commonwealth Protected Zone within weeks of the discovery of the Alert on 3 July 2007. But thieves have now invaded the fragile archaeological site, stealing such things as navigation lights, bottles, plates and a lamp shade. The theft was discovered by specialist divers undertaking a routine inspection of the small iron steamer wreck. Heritage Victoria executive director Steven Avery said “it’s very disappointing to see such a unique and important part of Victoria’s maritime history plundered for personal gain”. Under the Commonwealth Underwater Cultural Heritage Act 2018 it is an offence to damage the shipwreck or to enter the Protected Zone without a permit. Penalties of up to $168,000 or five years’ jail apply. “The [SS Alert] was lost for over 110 years until it was eventually discovered in 2007 near Cape Schanck, and a protected zone was put in place,” Mr Avery said. “When discovered, the ship still contained the crew’s personal effects, enabling an understanding of life at sea on an 1800s coastal trading vessel. “With the shipwreck located at a depth of 80 metres, the removal of these valuable artefacts could have only been carried out by specialist divers trained in technical diving. “Of the 600 historic shipwrecks in Victoria, only nine are in protected zones. The remaining wrecks can be explored so long as they community

don’t damage or disturb the wrecks or remove artefacts.” Built in Scotland in 1877, the SS Alert was a small iron steamer used mostly in Port Phillip to run general cargo between Melbourne and Geelong.

The steamer foundered at sea during a storm on 28 December 1893 while returning to Melbourne from Lakes Entrance with a cargo of wattle bark. Heritage Victoria is working with the Commonwealth Department of the Environment and Energy to investi-

gate the breach of the protected zone and looting. Anyone with information of the looting or the stolen artefacts can contact Heritage Victoria on 9938 6894 or heritage.victoria@delwp.vic.gov.au. Keith Platt

Lost at sea: An artist’s impression of the SS Alert sinking off Cape Schanck in 1893, above; the ship’s bow more than 120 years later, top; and toilets on the hertitage-listed wreck.

Award winning opening roofs and louvre systems. Control the sun at the touch of a button. www.louvretecmelbourne.com.au Southern Peninsula News