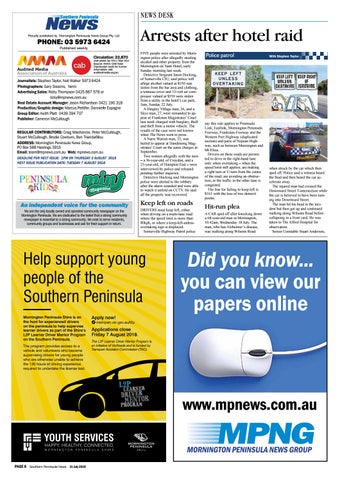 Arrests after hotel raid FIVE people were arrested by Mornington police after allegedly stealing alcohol and other property from the Mornington on Tanti Hotel, early Sunday morning last week. Detective Sergeant Jason Hocking, of Somerville CIU, said police will allege alcohol valued at $150 was stolen from the bar area and clothing, a tonneau cover and 12-volt air compressor valued at $550 were stolen from a utility in the hotel’s car park, 5am, Sunday 22 July. A Dingley Village man, 26, and a Skye man, 27, were remanded to appear at Frankston Magistrates’ Court last week charged with burglary, theft and theft from a motor vehicle. The results of the case were not known when The News went to press. A Narre Warren man, 33, was bailed to appear at Dandenong Magistrates’ Court on the same charges in September. Two women allegedly with the men – a 36-year-old, of Croydon, and a 25-year-old, of Hampton East – were interviewed by police and released pending further inquiries. Detective Hocking said Mornington police were alerted to the robbery after the alarm sounded and were able to watch it unfold on CCTV. He said all the property was recovered.

Keep left on roads DRIVERS must keep left, either when driving on a multi-lane road where the speed limit is more than 80kph, or where a keep-left-unlessovertaking sign is displayed. Somerville Highway Patrol police

Help support young people of the Southern Peninsula Mornington Peninsula Shire is on the hunt for experienced drivers on the peninsula to help supervise learner drivers as part of the Shire’s L2P Learner Driver Mentor Program on the Southern Peninsula. The program provides access to a vehicle and volunteers who become supervising drivers for young people who are otherwise unable to achieve the 120 hours of driving experience required to undertake the license test.

say this rule applies to Peninsula Link, Eastlink, Mornington Peninsula Freeway, Frankston Freeway and the Western Port Highway (duplicated section) and parts of Nepean Highway, such as between Mornington and Mt Eliza. Drivers on these roads are permitted to drive in the right-hand lane only when overtaking – when the speed limit still applies; are making a right turn or U-turn from the centre of the road; are avoiding an obstruction, or the traffic in the other lane is congested. The fine for failing to keep left is $161 with the loss of two demerit points.

Hit-run plea A CAR sped off after knocking down a 68-year-old man in Mornington, 10.42am, Wednesday 18 July. The man, who has Alzheimer’s disease, was walking along Wilsons Road

when struck by the car which then sped off. Police said a witness heard the thud and then heard the car accelerate away. The injured man had crossed the Downward Street T-intersection while the car is believed to have been turning into Downward Street. The man hit his head in the incident but then got up and continued walking along Wilsons Road before collapsing in a front yard. He was taken to The Alfred Hospital for observation. Senior Constable Stuart Anderson,

Applications close Friday 7 August 2018. The L2P Learner Driver Mentor Program is an initiative of VicRoads and is funded by Transport Accident Commission (TAC).