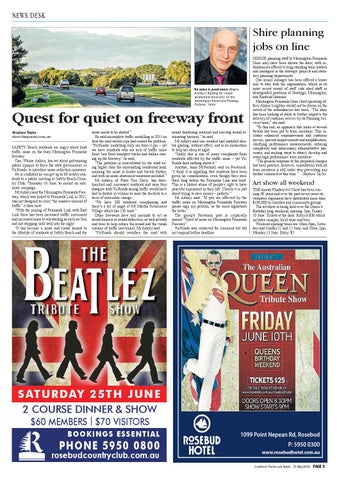 No noise is good noise: Wayne Ashley is fighting for sound abatement measures on the Mornington Peninsula Freeway. Pictures: Yanni

Quest for quiet on freeway front Stephen Taylor steve@mpnews.com.au SAFETY Beach residents are angry about loud traffic noise on the busy Mornington Peninsula freeway. One, Wayne Ashley, has set about galvanising public opinion to force the state government, or VicRoads, to introduce noise reduction measures. He is confident he can get up to 60 nearby residents to a public meeting at Safety Beach Country Club, Thursday 16 June, to mount an antinoise campaign. Mr Ashley said the Mornington Peninsula Freeway, which was linked to Peninsula Link in 2011, was not designed to carry “the massive amount of traffic” it does now. “With the joining of Peninsula Link with East Link there has been increased traffic movement and increased noise levels starting as early as 5am and not stopping until well into the night. “It has become a noise and visual hazard to the lifestyle of residents at Safety Beach and the

noise needs to be abated.” He said incomplete traffic modelling in 2011 on how the road would cope had caused the problem. “VicRoads’ modelling only ran 6am-11pm – yet we have residents who are sick of traffic noise from 5am from transport trucks and tradies roaring up the freeway,” he said. “The problem is exacerbated by the road being higher than the surrounding residential land, meaning the noise is louder and travels further, and with no noise-abatement measures included.” Mr Ashley, of Palm Tree Drive, has doorknocked and canvassed residents and says they disagree with VicRoads saying traffic would have had to double in volume to raise the decibels to a level of noticeable change. “We have 200 residents complaining and there’s a lot of angst at Mt Martha Retirement Village which has 130 units.” Other freeways have soil mounds to act as sound barriers or sound deflectors, as well as bush and trees to help reduce the sound and the visual eyesore of traffic movement, Mr Ashley said. “VicRoads should resurface the road with

sound deadening material and erecting sound attenuating barriers,” he said. Mr Ashley said one resident had installed double glazing, without effect, and is on medication to help her sleep at night. “Sadly, this is one of many complaints from residents affected by the traffic noise – yet Vic Roads does nothing about it.” Another, Janis McFarland, said on Facebook: “I think it is appalling that residents have been given no consideration, even though they were there long before the Peninsula Link was built. This is a blatant abuse of people's right to have peaceful enjoyment in their life. Clearly it is just about trying to save money – pathetic.” Mr Ashley said: “If you are affected by the traffic noise on Mornington Peninsula Freeway please sign my petition, as the more signatures the better.” The group’s Facebook post is cryptically named “Tyred of noise on Mornington Peninsula Freeway”. VicRoads was contacted for comment but did not respond before deadline.

SENIOR planning staff at Mornington Peninsula Shire may have been shown the door, with redundancies offered to long-standing team leaders and managers in the strategic projects and statutory planning departments. One senior manager has been offered a lesser role to stay with the organisation, which in its most recent round of staff cuts shed staff or downgraded positions at Hastings, Mornington, and Rosebud libraries. Mornington Peninsula Shire chief operating officer Alison Leighton would not be drawn on the extent of the redundancies last week. “The shire has been looking at ways to further improve the delivery of customer service by its Planning Services team,” she said. “To this end, an approach that looks at several factors has been put to team members. This includes enhanced responsiveness and customer service, process improvements and simplification, clarifying performance measurements, reducing complexity and unnecessary administrative processes, and seeking ways to attract, develop and retain high performance team members. “The general response to the proposed changes has been positive, however, consultation with all team members is still under way preventing any further comment at this time.” Stephen Taylor

Art show all weekend THE annual Flinders Art Show has been running 49 years and over the past seven years its volunteer organisers have distributed more than $190,000 to charities and community groups. The art show is being held over the Queen’s Birthday long weekend, opening 7pm, Friday 10 June. Tickets at the door. Entry is $30 which includes canapés, local wine and beer. Weekend opening times are 10am-4pm, Saturday and Sunday 11 and 12 June, and 10am-2pm, Monday 13 June. Entry: $5.