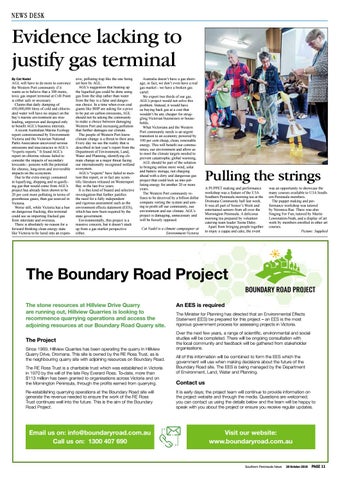 AGL will have to do more to convince the Western Port community if it wants us to believe that a 300 metre, toxic gas import terminal at Crib Point is either safe or necessary. Claims that daily dumping of 450,000,000 litres of cold and chlorinated water will have no impact on the bay’s marine environment are misleading, unproven and designed only to benefit AGL’s business interests. A recent Australian Marine Ecology report commissioned by Environment Victoria and the Victorian National Parks Association uncovered serious omissions and inaccuracies in AGL’s “experts reports.” It found AGL’s report on chlorine release failed to consider the impacts of secondary toxicants - poisons with the potential for chronic, long-term and irreversible impacts on the ecosystem. Due to the extra energy consumed in liquefying, shipping and re-gasifying gas that would come from AGL’s project has already been shown to be 20 per cent more polluting in terms of greenhouse gases, than gas sourced in Victoria. Worse still, while Victoria has a ban on dangerous fracking, this terminal could see us importing fracked gas from interstate and overseas. There is absolutely no reason for a forward thinking clean energy state like Victoria to be lured into an expen-

sive, polluting trap like the one being set here by AGL. AGL’s suggestion that heating up the liquefied gas could be done using gas from the ship rather than water from the bay is a false and dangerous choice. In a time when even coal giants like BHP are asking for a price to be put on carbon emissions, AGL should not be asking the community to make a choice between damaging Western Port and increasing pollution that further damages our climate. The people of Western Port know climate change is a threat to their area. Every day we see the reality that is described in last year’s report from the Department of Environment, Land, Water and Planning, identifying climate change as a major threat facing our internationally recognised wetland ecosystem. AGL’s “experts” have failed to mention this report, or in fact any scientific literature released on Westernport Bay in the last five years. It is this kind of biased and selective investigation that further justifies the need for a fully independent and rigorous assessment such as the environment effects statement (EES), which has now been required by the state government. Environmentally, this project is a massive concern, but it doesn’t stack up from a gas market perspective either.

Australia doesn’t have a gas shortage; in fact, we don’t even have a real gas market - we have a broken gas cartel. We export two thirds of our gas. AGL’s project would not solve this problem. Instead, it would have us buying back gas at a cost that wouldn’t be any cheaper for struggling Victorian businesses or households. What Victorians and the Western Port community needs is an urgent transition to an economy powered by 100 per cent cheap, clean, renewable energy. This will benefit our communities, our environment and allow us to meet the climate targets needed to prevent catastrophic global warming. AGL should be part of the solution to bringing online more wind, solar and battery storage, not charging ahead with a dirty and dangerous gas project that could lock us into polluting energy for another 20 or more years. The Western Port community refuses to be deceived by a billion dollar company rorting the system and aiming to profit off our community, our environment and our climate. AGL’s project is damaging, unnecessary and will be fiercely opposed. Cat Nadel is a climate campaigner at Environment Victoria

Pulling the strings A PUPPET making and performance workshop was a feature of the U3A Southern Peninsula morning tea at the Dromana Community hall last week. It was all part of Senior’s Week and entertained seniors from all over the Mornington Peninsula. A delicious morning tea prepared by volunteer catering team leader Teena Daley. Apart from bringing people together to enjoy a cuppa and cake, the event

was an opportunity to showcase the many courses available to U3A Southern Peninsula members. The puppet making and performance workshop was tutored by Veronica Rae. There was also Singing For Fun, tutored by Martie Lowenstein-Nash, and a display of art work by members enrolled in other art courses. Picture: Supplied

The Boundary Road Project The stone resources at Hillview Drive Quarry are running out, Hillview Quarries is looking to recommence quarrying operations and access the adjoining resources at our Boundary Road Quarry site. The Project Since 1969, Hillview Quarries has been operating the quarry in Hillview Quarry Drive, Dromana. This site is owned by the RE Ross Trust, as is the neighbouring quarry site with adjoining resources on Boundary Road. The RE Ross Trust is a charitable trust which was established in Victoria in 1970 by the will of the late Roy Everard Ross. To-date, more than $113 million has been granted to organisations across Victoria and on the Mornington Peninsula, through the profits earned from quarrying. Re-establishing quarrying operations at the Boundary Road site will generate the revenue needed to ensure the work of the RE Ross Trust continues well into the future. This is the aim of the Boundary Road Project.

An EES is required The Minister for Planning has directed that an Environmental Effects Statement (EES) be prepared for this project – an EES is the most rigorous government process for assessing projects in Victoria. Over the next few years, a range of scientific, environmental and social studies will be completed. There will be ongoing consultation with the local community and feedback will be gathered from stakeholder organisations. All of this information will be combined to form the EES which the government will use when making decisions about the future of the Boundary Road site. The EES is being managed by the Department of Environment, Land, Water and Planning.

Contact us It is early days; the project team will continue to provide information on the project website and through the media. Questions are welcomed; you can contact us using the details below and the team will be happy to speak with you about the project or ensure you receive regular updates.