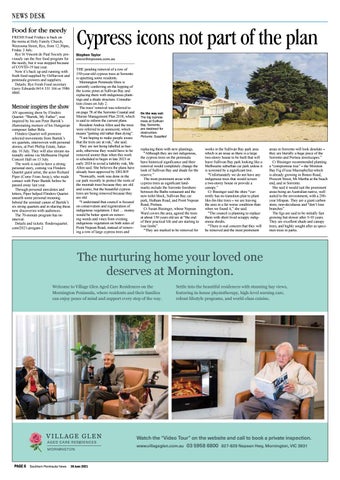 NEWS DESK Food for the needy FRESH Food Fridays is back on the menu at Holy Family Church, Weeroona Street, Rye, from 12.30pm, Friday 2 July. Rye St Vincent de Paul Society previously ran the free food program for the needy, but it was stopped because of COVID-19 last year. Now it’s back up and running with fresh food supplied by OzHarvest and peninsula growers and suppliers. Details: Rye Fresh Food secretary Gerry Edwards 0414 331 166 or 5986 4860.

AN upcoming show by Flinders Quartet: “Bartók, My Father”, was inspired by his son Peter Bartók’s illuminating memoir of his Hungarian composer father Béla. Flinders Quartet will premiere selected movements from Bartók’s six quartets, interwoven with personal stories, at Port Phillip Estate, Saturday 10 July. They will also stream nationally online via Melbourne Digital Concert Hall on 15 July. The work is said to have a strong personal story, coming via Flinders Quartet guest artist, the actor Richard Piper (Come From Away), who made contact with Peter Bartók before he passed away last year. Through personal anecdotes and letters, Piper helped Flinders Quartet unearth some personal meaning behind the seminal canon of Bartók’s six string quartets and in sharing these new discoveries with audiences. The 70-minute program has no interval. Details and tickets: flindersquartet. com/2021-progam-2

Cypress icons not part of the plan Stephen Taylor steve@mpnews.com.au THE pending removal of a row of 150-year-old cypress trees at Sorrento is upsetting some residents. Mornington Peninsula Shire is currently conferring on the lopping of the iconic pines at Sullivan Bay and replacing them with indigenous plantings and a shade structure. Consultation closes on July 2. The trees’ removal was referred to on page 78 of the Sorrento Coastal and Marine Management Plan 2018, which is said to inform the current plans. Resident Andrea Allen said the trees were referred to as senescent, which means “getting old rather than dying”. “I am hoping to make people aware that the trees are at risk,” she said. They are not being labelled as hazards, otherwise they would have to be removed sooner than when this work is scheduled to begin in late 2023 or early 2024 to avoid a liability risk, Ms Allen said. She believes the plans have already been approved by DELWP. “Ironically, work was done in the car park recently to protect the roots of the moonah trees because they are old and iconic, but the beautiful cypress trees are being removed because they are old. “I understand that council is focused on conservation and regeneration of indigenous vegetation. I feel … money would be better spent on removing weeds and vines from existing indigenous vegetation on both sides of Point Nepean Road, instead of removing a row of large cypress trees and

On the way out: The big cypress trees at Sullivan Bay, Sorrento, are destined for destruction. Pictures: Supplied

replacing them with new plantings. “Although they are not indigenous, the cypress trees on the peninsula have historical significance and their removal would completely change the look of Sullivan Bay and shade for the reserve.” The most prominent areas with cypress trees as significant landmarks include the Sorrento foreshore between the Baths restaurant and the new toilet block, Sullivan Bay car park, Hotham Road, and Point Nepean Road, Portsea. Cr Susan Bissinger, whose Nepean Ward covers the area, agreed the trees at about 150 years old are at “the end of their practical life and are starting to lose limbs”. “They are marked to be removed for

works in the Sullivan Bay park area which is an issue as there is a large two-storey house to be built that will leave Sullivan Bay park looking like a Melbourne suburban car park unless it is screened by a significant tree. “Unfortunately we do not have any indigenous trees that would screen a two-storey house or provide a canopy.” Cr Bissinger said the shire “currently has no transition plan to plant like-for-like trees – we are leaving the area in a far worse condition than when we found it,” she said. “The council is planning to replace them with short lived scrappy indigenous shrubs. “There is real concern that they will be removed and the most prominent

areas in Sorrento will look desolate – they are literally a huge piece of the Sorrento and Portsea streetscapes.” Cr Bissinger recommended planting a “compromise tree” – the Moreton Bay Fig (Ficus Macrophylla) which is already growing in Boneo Road, Prescott Street, Mt Martha at the beach end, and in Sorrento. She said it would suit the prominent areas being an Australian native, well suited to the environment, with a 200year lifespan. They are a giant carbon store, non-deciduous and “don’t lose branches”. The figs are said to be initially fast growing but slower after 5-10 years. They are excellent shade and canopy trees, and highly sought after as specimen trees in parks.

The nurturing home your loved one deserves at Mornington. Welcome to Village Glen Aged Care Residences on the Mornington Peninsula, where residents and their families can enjoy peace of mind and support every step of the way.

Watch the “Video Tour” on the website and call to book a private inspection. www.villageglen.com.au