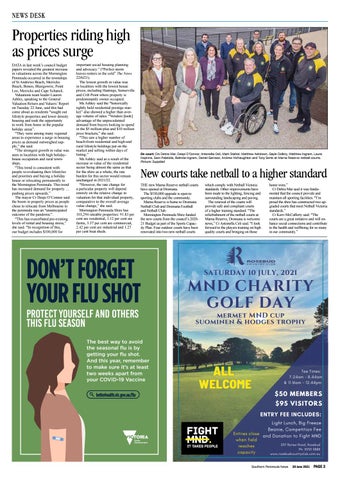 Properties riding high as prices surge DATA in last week’s council budget papers revealed the greatest increase in valuations across the Mornington Peninsula occurred in the townships of St Andrews Beach, Merricks Beach, Boneo, Blairgowrie, Point Leo, Merricks and Cape Schanck. Valuations team leader Lauren Ashley, speaking to the General Valuation Return and Valuers’ Report on Tuesday 22 June, said this had come about as residents “sought out lifestyle properties and lower density housing and took the opportunity to work from home in the popular holiday areas”. “They were among many regional areas to experience a surge in housing prices as demand outweighed supply,” she said. “The strongest growth in value was seen in localities with high holidayhouse occupation and rural townships. “This trend is consistent with people re-evaluating their lifestyles and priorities and buying a holiday house or relocating permanently to the Mornington Peninsula. This trend has increased demand for property … pushing prices upwards.” The mayor Cr Despi O’Connor said the boom in property prices as people chose to relocate from Melbourne to the peninsula was an “unanticipated outcome of the pandemic”. “This has exacerbated pre-existing levels of rental and housing stress,” she said. “In recognition of this, our budget includes $100,000 for

important social housing planning and advocacy.” (“Perfect storm leaves renters in the cold” The News 22/6/21). The lowest growth in value was in localities with the lowest house prices, including Hastings, Somerville and Crib Point where property is predominantly owner occupied. Ms Ashley said the “historically tightly held residential prestige market” also showed a higher than average volume of sales. “Vendors [took] advantage of the unprecedented demand from buyers looking to spend in the $5 million-plus and $10 million price brackets,” she said. “This saw a higher number of beach-front residential and high-end rural lifestyle holdings put on the market and selling within days of listing.” Ms Ashley said as a result of the increase in value of the residential sector being almost the same as that for the shire as a whole, the rate burden for this sector would remain unchanged in 2021/22. “However, the rate change for a particular property will depend entirely on the relative change in valuation for that individual property, comparative to the overall average value change,” she said. Mornington Peninsula Shire has 103,294 rateable properties: 91.83 per cent are residential, 1.12 per cent are farms, 3.37 per cent are commercial, 2.42 per cent are industrial and 1.27 per cent boat sheds.

New courts take netball to a higher standard THE new Marna Reserve netball courts have opened at Dromana. The $530,000 upgrade is open to sporting clubs and the community. Marna Reserve is home to Dromana Netball Club and Dromana Football and Netball Club. Mornington Peninsula Shire funded the new courts from the council’s 202021 Budget as part of the Sports Capacity Plan. Four outdoor courts have been renovated into two new netball courts

which comply with Netball Victoria standards. Other improvements have been made to the lighting, fencing and surrounding landscaping and paving. The renewal of the courts will provide safe and compliant courts of a higher training standard. “The refurbishment of the netball courts at Marna Reserve, Dromana is welcome news,” Cr Antonella Celi said. “I look forward to the players training on high quality courts and bringing on those

home wins.” Cr Debra Mar said it was fundamental that the council provide and maintain all sporting facilities. “I’m proud the shire has constructed two upgraded courts that meet Netball Victoria standards.” Cr Kerri McCafferty said: “The courts are a great initiative and will enhance social connections and contribute to the health and wellbeing for so many in our community.”

The best way to avoid the seasonal flu is by getting your flu shot. And this year, remember to make sure it’s at least two weeks apart from your COVID-19 Vaccine

and Donation to Fight MND