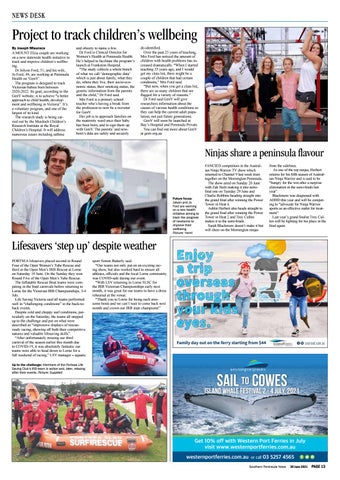 Project to track children’s wellbeing By Joseph Misuraca A MOUNT Eliza couple are working on a new statewide health initiative to track and improve children’s wellbeing. Dr Jolyon Ford, 51, and his wife, Jo Ford, 49, are working at Peninsula Health on ‘GenV’. The program is designed to track Victorian babies born between 2020-2022. Its goal, according to the GenV website, is to achieve “a better approach to child health, development and wellbeing in Victoria”. It’s a voluntary program, and one of the largest of its kind. The research study is being carried out by the Murdoch Children’s Research Institute at the Royal Children’s Hospital. It will address numerous issues including asthma

and obesity to name a few. Dr Ford is Clinical Director for Women’s Health at Peninsula Health. He’s helped to facilitate the program’s launch at Frankston Hospital. “The study collects a whole bunch of what we call ‘demographic data’ which is just about family, what they do, where they live, their socio-economic status, their smoking status, the genetic information from the parents and the child,” Dr Ford said. Mrs Ford is a primary school teacher who’s having a break from the profession to now be a recruiter for GenV. Her job is to approach families on the maternity ward once their baby has been born, and to sign them up with GenV. The parents’ and newborn’s data are safely and securely

de-identified. Over the past 25 years of teaching, Mrs Ford has noticed the amount of children with health problems has increased dramatically. “When I started teaching 25 years ago, and I would get my class list, there might be a couple of children that had certain conditions,” Mrs Ford said. “But now, when you get a class list, there are so many children that are flagged for a variety of reasons.” Dr Ford said GenV will give researchers information about the causes of various health conditions so they can help the current adult population, not just future generations. GenV will soon be launched at Bay’s Hospital and Peninsula Private. You can find out more about GenV at genv.org.au

Future focus: Jolyon and Jo Ford are working on a new health initiative aiming to track the progress of newborns to improve their wellbeing. Picture: Yanni

from the sidelines. As one of the top ninjas, Herbert returns for his fifth season of Australian Ninja Warrior and is said to be “hungry for the win after a surprise elimination in the semi-finals last year”. Blackmore was diagnosed with ADHD this year and will be competing to “advocate for Ninja Warrior sports as an effective outlet for treatment”. Last year’s grand finalist Troy Cullen will be fighting for his place in the final again.

Lifesavers ‘step up’ despite weather PORTSEA lifesavers placed second in Round Four of the Open Women’s Tube Rescue and third in the Open Men’s IRB Rescue at Lorne on Saturday 19 June. On the Sunday they won Round Five of the Open Men’s Tube Rescue. The Inflatable Rescue Boat teams were competing in the final carnivals before returning to Lorne for the Victorian IRB Championships, 3-4 July. Life Saving Victoria said all teams performed well in “challenging conditions” in the back-toback events. Despite cold and choppy surf conditions, particularly on the Saturday, the teams all stepped up to the challenge and put on what were described as “impressive displays of rescueready racing, showing off both their competitive natures and valuable lifesaving skills”. “After unfortunately missing our third carnival of the season earlier this month due to COVID-19, it was absolutely fantastic our teams were able to head down to Lorne for a full weekend of racing,” LSV manager – aquatic Up to the challenge: Members of the Portsea Life Saving Club’s IRB team in action and, later, relaxing after their events. Picture: Supplied

sport Simon Butterly said. “Our teams not only put on an exciting racing show, but also worked hard to ensure all athletes, officials and the local Lorne community was COVID-safe during our event. “With LSV returning to Lorne SLSC for the IRB Victorian Championships early next month, it was great for our teams to have a dress rehearsal at the venue. “Thank you to Lorne for being such awesome hosts and we can’t wait to come back next month and crown our IRB state champions!”

Family day out on the ferry starting from $44