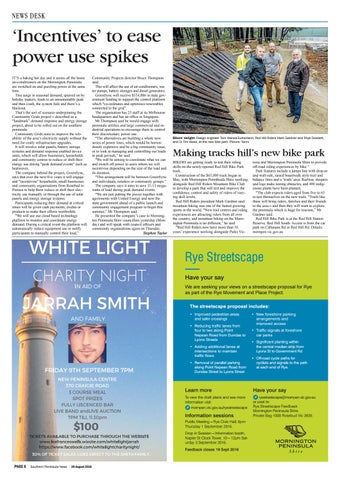 ‘Incentives’ to ease power use spikes IT’S a baking hot day and it seems all the home air-conditioners on the Mornington Peninsula are switched on and guzzling power at the same time. This surge in seasonal demand, spurred on by holiday makers, leads to an unsustainable peak and then crash, the system fails and there’s a blackout. That’s the sort of scenario underpinning the Community Grids project – described as a “landmark” demand response and energy storage project, about to be rolled out on the southern peninsula. Community Grids aims to improve the reliability of the area’s electricity supply without the need for costly infrastructure upgrades. It will involve solar panels, battery storage systems and demand response enabled device units, which will allow businesses, households and community centres to reduce or shift their energy use during “peak demand events” such as heatwaves. The company behind the project, GreenSync, says that over the next five years it will engage and “incentivise” households, small businesses and community organisations from Rosebud to Portsea to help them reduce or shift their electricity use manually or through the use of solar panels and energy storage systems. Participants reducing their demand at critical times will be given cash payments, credits or products to make their efforts worthwhile. “We will use our cloud based technology platform to monitor and coordinate energy demand. During a critical event the platform will automatically reduce equipment use or notify participants to manually control their load,”

Community Projects director Bruce Thompson said. This will affect the use of air-conditioners, water pumps, battery storages and diesel generators. GreenSync will receive $554,886 in state government funding to support the control platform which “co-ordinates and optimises renewables connected to the grid”. The organisation has 25 staff at its Melbourne headquarters and has an office in Singapore. Mr Thompson said he would engage with peninsula utilities and large commercial and industrial operations to encourage them to control their discretionary power use. “The alternatives are building a whole new series of power lines, which would be horrendously expensive and be a big community issue, or to look at managing and controlling our loads in peak periods,” he said. “We will be aiming to coordinate what we can and switch off power to users whom we will incentivise depending on the size of the load and its duration. “This arrangement will be between GreenSync and individuals, retailers or community groups.” The company says it aims to save 11-13 megawatts of load during peak demand events. “We are just putting the pieces together with agreements with United Energy and now the state government ahead of a public launch and community engagement program to begin this summer,” Mr Thompson said. He presented the company’s case to Mornington Peninsula Shire councillors yesterday (Monday) and will speak with council officers and community organisations again on Thursday. Stephen Taylor

Making tracks hill’s new bike park BIKERS are getting ready to test their riding skills on the newly-opened Red Hill Bike Park track. Construction of the $65,000 track began in May, with Mornington Peninhsula Shire working alongside Red Hill Riders Mountain Bike Club to develop a park that will test and improve the confidence, control and safety of riders of varying skill levels. Red Hill Riders president Mark Gardner said mountain biking was one of the fastest growing sports in the world. “New trail centres and riding experiences are attracting riders from all over the country, and mountain biking on the Mornington Peninsula is no different,” he said. “Red Hill Riders now have more than 10 years’ experience working alongside Parks Vic-

toria and Mornington Peninsula Shire to provide off-road riding experiences by bike.” Park features include a jumps line with drop-in and wall-ride, raised boardwalk style trail and balance lines and a ‘trials’ area. Railway sleepers and logs make testing obstacles, and 400 indigenous plants have been planted. “The club expects riders aged from five to 65 to test themselves on the new trails. “Trails like these will bring riders, families and their friends to the area – and then they will want to explore the peninsula which is huge for tourism,” Mr Gardner said. Red Hill Bike Park is at the Red Hill Station Reserve, Red Hill South. Access is from the car park on Callanans Rd or Red Hill Rd. Details: mornpen.vic.gov.au

Have your say We are seeking your views on a streetscape proposal for Rye as part of the Rye Movement and Place Project. The streetscape proposal includes: • Improved pedestrian areas and safer crossings • Reducing trafﬁc lanes from four to two along Point Nepean Road from Dundas to Lyons Streets • Adding additional lanes at intersections to maintain trafﬁc ﬂows • Removal of parallel parking along Point Nepean Road from Dundas Street to Lyons Street

• Off-road cycle paths for cyclists and signals to the path at each end of Rye.