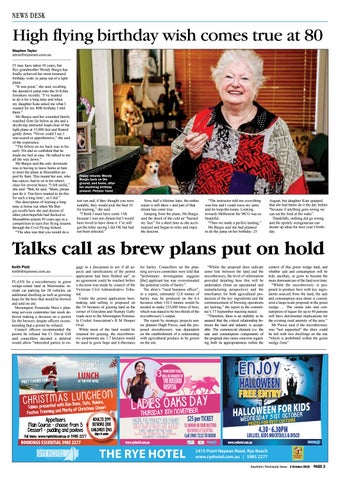 High flying birthday wish comes true at 80 Stephen Taylor steve@mpnews.com.au IT may have taken 50 years, but Rye grandmother Wendy Burgis has finally achieved her most treasured birthday wish: to jump out of a light plane. “It was great,” she said, recalling the daredevil jump onto the St Kilda foreshore recently. “I’ve wanted to do it for a long time and when my daughter Kate asked me what I wanted for my 80th birthday I told them.” Ms Burgis said her extended family watched from far below as she and a skydiving instructor leapt clear of the light plane at 15,000 feet and floated gently down. “Never could I say I was scared or apprehensive,” she said of the experience. “The fellow on my back was in his early 30s and so confident that he made me feel at ease. He talked to me all the way down.” Ms Burgis said the only downside was in having to leave home at 6am to meet the plane at Moorabbin airport by 8am. This meant her son, who has cancer, had to sit in his wheelchair for several hours. “I felt awful,” she said. “But, he said, ‘Mum, please just do it. You have wanted to do this for such a long time’, so I did.” Her description of waiting a long time is borne out when Ms Burgis recalls how she and dozens of other pilot-hopefuls had flocked to Moorabbin airport 50 years ago in a competition to earn free flying lessons through the Civil Flying School. “The idea was that you would do a

Happy returns: Wendy Burgis back on the ground, and home, after her skydiving birthday present. Picture: Yanni

test run and, if they thought you were suitable, they would pick the best 10 for training,” she said. “I think I must have come 11th because I was not chosen but I would have loved to have done it. I’ve still got the letter saying I did OK but had not been selected.”

Now, half a lifetime later, the enthusiasm is still there – and part of that dream has come true. Jumping from the plane, Ms Burgis said the shock of the cold air “burned my face” for a short time as she acclimatised and began to relax and enjoy the descent.

“The instructor told me everything was fine and I could wave my arms and do loop-the-loops. Looking towards Melbourne the MCG was so beautiful. “Then we made a perfect landing.” Ms Burgis said she had planned to do the jump on her birthday: 25

August, but daughter Kate quipped that she had better do it the day before “because if anything goes wrong we can eat the food at the wake”. Thankfully, nothing did go wrong and the spritely octogenarian can dream up ideas for next year’s birthday.

Talks call as brew plans put on hold Keith Platt keith@mpnews.com.au PLANS for a microbrewery in green wedge-zoned land at Moorooduc include car parking for 28 vehicles, an additional dwelling as well as growing hops for the beer that would be brewed and sold on site. Mornington Peninsula Shire’s planning services committee last week deferred making a decision on a permit for the brewery despite officers recommending that a permit be refused. Council officers recommended the permit be refused but Cr David Gill said councillors decided a deferral would allow “interested parties to en-

gage in a discussion to see if all aspects and ramifications of the permit application had been fleshed out” so an agreement could be reached before a decision was made by council of the Victorian Civil Administrative Tribunal. Under the permit application beermaking and selling is proposed on the 34 hectares of grazing land at the corner of Graydens and Stumpy Gully roads next to the Mornington Peninsula Cricket Association’s R M Hooper Oval. While most of the land would be retained for grazing, the microbrewery proponents say 1.7 hectares would be used to grow hops and 6.4hectares

for barley. Councillors on the planning services committee were told that “preliminary investigation suggests [the] applicant has way overestimated the potential yields of barley”. The shire’s “rural business officer”, in a report, estimated 12.8 tonnes of barley may be produced on the 6.4 hectares when 116.5 tonnes would be needed to make 233,000 litres of beer, which was stated to be two thirds of the microbrewery’s output. The report by strategic projects senior planner Hugh Pierce, said the proposed microbrewery was dependent on the establishment of a relationship with agricultural produce to be grown on the site.

“Whilst the proposal does indicate some link between the land and the microbrewery, the level of information provided detailing how this will be undertaken (from an operational and manufacturing perspective) and the timeframes for both agricultural production of the key ingredients and the commencement of brewing operations are lacking,” the report to the committee’s 17 September meeting stated. “Therefore, there is an inability to be assured that the critical relationship between the land and industry is acceptable. The commercial element (i.e. the sale and consumption component) of the proposal also raises concerns regarding both its appropriateness within the