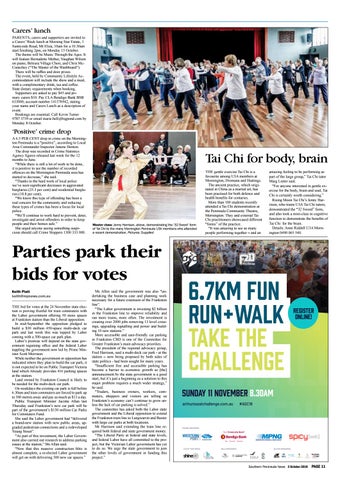 Carers’ lunch PARENTS, carers and supporters are invited to a Carers’ Week lunch at Morning Star Estate, 1 Sunnyside Road, Mt Eliza, 10am for a 10.30am start finishing 2pm, on Monday 15 October. The theme will be Music Through the Ages. It will feature Bernadette Mether, Vaughan Wilson on piano, Beleura Village Choir, and Chris McConechey (“The Master of the Washboard”). There will be raffles and door prizes. The event, held by Community Lifestyle Accommodation will include the show and a meal, with a complimentary drink, tea and coffee. State dietary requirements when booking. Supporters are asked to pay $45 and primary carers $10. Pay CLA Bendigo Bank BSB 633000, account number 141576942, stating your name and Carers Lunch as a description of event. Bookings are essential. Call Kevin Turner 9787 3739 or email marie.hell@bigpond.com by Monday 8 October.

‘Positive’ crime drop A 6.5 PER CENT drop in crime on the Mornington Peninsula is a “positive”, according to Local Area Commander Inspector Janene Denton. The drop was recorded in Crime Statistics Agency figures released last week for the 12 months to June. “While there is still a lot of work to be done, it is positive to see the number of recorded offences on the Mornington Peninsula area has started to decrease,” she said. “Thanks to the hard work of local police we’ve seen significant decreases in aggravated burglaries (25.3 per cent) and residential burglaries (18.8 per cent). “We know this type of offending has been a real concern for the community and reducing these types of crimes has been a focus for local police. “We’ll continue to work hard to prevent, deter, investigate and arrest offenders in order to keep people and their homes safe.” She urged anyone seeing something suspicious should call Crime Stoppers 1300 333 000.

Master class: Jenny Harrison, above, demonstrating the ‘32 Sword’ form of Tai Chi to the many Mornington Peninsula U3A members who attended a recent demonstration. Pictures: Supplied

Parties park their bids for votes Keith Platt keith@mpnews.com.au THE bid for votes at the 24 November state election is proving fruitful for train commuters with the Labor government offering 50 more spaces at Frankston station than the Liberal opposition. In mid-September the opposition pledged to build a $30 million 450-space multi-deck car park and last week this was topped by Labor coming with a 500-space car park plan. Labor’s promise will depend on the state government regaining office and the federal Labor toppling the government now led by Prime Minister Scott Morrison. While neither the government or opposition has indicated where they plan to build the car park, it is not expected to be on Public Transport Victoria land which Already provides 416 parking spaces at the station. Land owned by Frankston Council is likely to be needed for the multi-deck car park. On weekdays the existing car park is full before 6.30am and train commuters are forced to park up to 500 metres away and pay as much as $13 a day. Public Transport Minister Jacinta Allan last Thursday said Frankston’s new car park will be part of the government’s $150 million Car Parks for Commuters Fund. She said the Labor government had “delivered a brand-new station with new public areas, upgraded pedestrian connections and a redeveloped Young Street”. “As part of this investment, the Labor Government also carried out research to address parking issues at the station,” Ms Allan said. “Now that this massive construction blitz is almost complete, a re-elected Labor government will get on with delivering 500 new car spaces.”

Ms Allen said the government was also “undertaking the business case and planning work necessary for a future extension of the Frankston line”. “The Labor government is investing $2 billion in the Frankston line to improve reliability and run more trains, more often. The investment is creating over 2000 jobs removing 13 level crossings, upgrading signalling and power and building 10 new stations.” More accessible and user-friendly car parking in Frankston CBD is one of the Committee for Greater Frankston’s main advocacy priorities. The president of the regional advocacy group, Fred Harrison, said a multi-deck car park - at the station – now being proposed by both sides of state politics - had been sought for many years. “Insufficient free and accessible parking has become a barrier to economic growth so [the] announcement by the state government is a good start, but it’s just a beginning as a solution to this major problem requires a much wider strategy,” he said. “Traders, business owners, workers, commuters, shoppers and visitors are telling us Frankston’s economy can’t continue to grow unless the lack of car parking is solved.” The committee has asked both the Labor state government and the Liberal opposition to extend the Frankston train line to Langwarrin and Baxter with large car parks at both locations. Mr Harrison said extending the train line required both federal and state government money. “The Liberal Party at federal and state levels, and federal Labor have all committed to the project, but the Victorian Labor government has yet to do so. We urge the state government to join the other levels of government in funding this project.”

THE gentle exercise Tai Chi is a favourite among U3A members at Mornington, Dromana and Hastings. The ancient practice, which originated in China as a martial art, has been practised for both defence and health benefits for centuries. More than 100 students recently attended a Tai Chi demonstration at the Peninsula Community Theatre, Mornington. They and external Tai Chi practitioners showcased different “forms” of the practice. “It was amazing to see so many people performing together – and an

amazing feeling to be performing as part of the large group,” Tai Chi tutor Marg Lester said. “For anyone interested in gentle exercise for the body, brain and soul, Tai Chi is certainly worth considering.” Rising Moon Tai Chi’s Jenny Harrison, who trains U3A Tai Chi tutors, demonstrated the “32 Sword” form, and also took a mini-class in cognitive function to demonstrate the benefits of Tai Chi for the brain. Details: Anne Riddell U3A Mornington 0490 065 540.