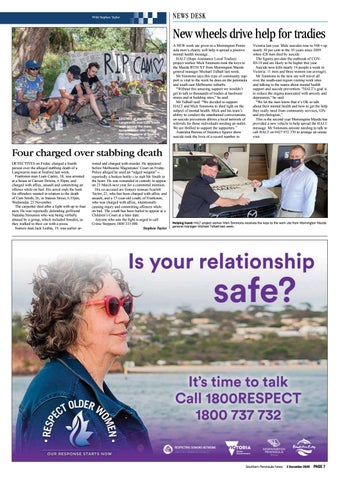 FRIENDS of murdered Langwarrin man Cam Smith were among the many sympathisers who visited the crime scene at Seaford. Picture: Gary Sissons

A NEW work ute given to a Mornington Peninsula men’s charity will help it spread a positive mental health message. HALT (Hope Assistance Local Tradies) project worker Mick Simmons took the keys to the Mazda BT50 XT from Mornington Mazda general manager Michael Tidball last week. Mr Simmons says this type of community support is vital to the work he does on the peninsula and south east Melbourne suburbs. “Without this amazing support we wouldn’t get to talk to thousands of tradies at hardware stores and at building sites,” he said. Mr Tidball said: “We decided to support HALT and Mick Simmons to shed light on the subject of mental health. Mick and his team’s ability to conduct the unashamed conversations on suicide prevention allows a local network of referrals for those individuals needing an outlet. We are thrilled to support the supporters.” Australia Bureau of Statistics figures show suicide took the lives of a record number in

Victoria last year. Male suicides rose to 548 – up nearly 30 per cent in the 10 years since 2009 when 428 men died by suicide. The figures pre-date the outbreak of COVID-19 and are likely to be higher this year. Suicide now kills nearly 14 people a week in Victoria: 11 men and three women (on average). Mr Simmons in the new ute will travel all over the south-east region visiting work sites and talking to the teams about mental health support and suicide prevention. “HALT’s goal is to reduce the stigma associated with anxiety and depression,” he said. “We let the men know that it’s OK to talk about their mental health and how to get the help they really need from community services, GPs and psychologists.” This is the second year Mornington Mazda has provided a new vehicle to help spread the HALT message. Mr Simmons anyone needing to talk to call HALT on 0427 972 370 to arrange an onsite visit.

Four charged over stabbing death DETECTIVES on Friday charged a fourth person over the alleged stabbing death of a Langwarrin man at Seaford last week. Frankston man Liam Casley, 18, was arrested at a house at Carrum Downs, 4.30pm, and charged with affray, assault and committing an offence while on bail. His arrest ends the hunt for offenders wanted in relation to the death of Cam Smith, 26, in Station Street, 6.55pm, Wednesday 25 November. The carpenter died after a fight with up to four men. He was reportedly defending girlfriend Natasha Stroumos who was being verbally abused by a group, which included females, as they walked to their car with a pizza. Somers man Jack Ledlin, 19, was earlier ar-

rested and charged with murder. He appeared before Melbourne Magistrates’ Court on Friday. Police alleged he used an “edged weapon” – reportedly a broken bottle – to stab Mr Smith in the heart. He was remanded in custody to appear on 25 March next year for a committal mention. His co-accused are Somers woman Scarlett Taylor, 21, who has been charged with affray and assault, and a 17-year-old youth, of Frankston, who was charged with affray, intentionally causing injury and committing offences while on bail. The youth has been bailed to appear at a Children’s Court at a later date. Anyone who saw the fight is urged to call Crime Stoppers 1800 333 000. Stephen Taylor