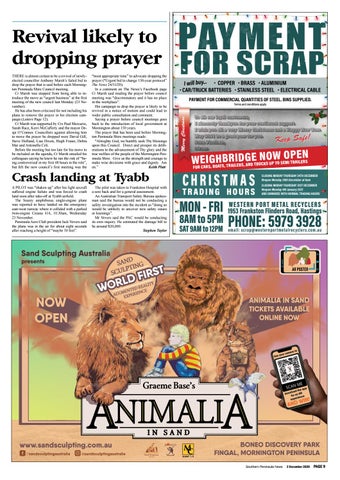 Revival likely to dropping prayer “most appropriate time” to advocate dropping the prayer (“Urgent bid to change 150-year protocol” The News 24/11/20). In a comment on The News’s Facebook page Cr Marsh said reading the prayer before council meeting was “discriminatory and it has no place in the workplace”. His campaign to drop the prayer is likely to be revived in a notice of motion and could lead to wider public consultation and comment. Saying a prayer before council meetings goes back to the introduction of local government at Mornington about 150 years. The prayer that has been said before Mornington Peninsula Shire meetings reads: “Almighty God, we humbly seek Thy blessings upon this Council. Direct and prosper its deliberations to the advancement of Thy glory and the true welfare of the people of the Mornington Peninsula Shire. Give us the strength and courage to make wise decisions with grace and dignity. Am en.” Keith Platt

Crash landing at Tyabb A PILOT was “shaken up” after his light aircraft suffered engine failure and was forced to crash land soon after take-off at Tyabb airfield. The Searey amphibious single-engine plane was reported to have landed on the emergency east-west runway where it collided with a parked twin-engine Cessna 414, 10.30am, Wednesday 25 November. Peninsula Aero Club president Jack Vevers said the plane was in the air for about eight seconds after reaching a height of “maybe 50 feet”.

The pilot was taken to Frankston Hospital with a sore back and for a general assessment. An Australian Transport Safety Bureau spokesman said the bureau would not be conducting a safety investigation into the incident as “doing so would be unlikely to uncover new safety issues or learnings”. Mr Vevers said the PAC would be conducting its own inquiry. He estimated the damage bill to be around $20,000. Stephen Taylor

THERE is almost certain to be a revival of newlyelected councillor Anthony Marsh’s failed bid to drop the prayer that is said before each Mornington Peninsula Shire Council meeting. Cr Marsh was stopped from being able to introduce the move as “urgent business” at the first meeting of the new council last Monday (23 November). He has also been criticised for not including his plans to remove the prayer in his election campaign (Letters Page 12). Cr Marsh was supported by Crs Paul Mercurio, Sarah Race, Kerri McCafferty and the mayor Despi O’Connor. Councillors against allowing him to move the prayer be dropped were David Gill, Steve Holland, Lisa Dixon, Hugh Fraser, Debra Mar and Antonella Celi. Before the meeting but too late for his move to be included on the agenda, Cr Marsh emailed his colleagues saying he knew he ran the risk of “being controversial in my first 48 hours in the role”, but felt the new council’s first meeting was the

S, AND TRUCKS UP TO SEMI