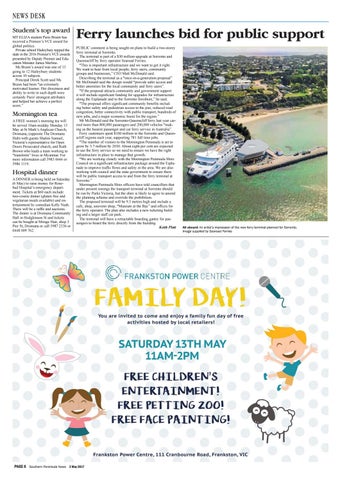 Mornington tea A FREE women’s morning tea will be served 10am-midday Monday 15 May at St Mark’s Anglican Church, Dromana, (opposite The Dromana Hub) with guests Shalini Samuel, Victoria’s representative for Open Doors Persecuted church, and Ruth Brown who leads a team working to “transform” lives in Myanmar. For more information call 5985 4666 or 5986 1119.

Hospital dinner A DINNER is being held on Saturday (6 May) to raise money for Rosebud Hospital’s emergency department. Tickets at $60 each include two-course dinner (gluten free and vegetarian meals available) and entertainment by comedian Kelly Nash. There will be a raffle and auctions. The dinner is at Dromana Community Hall in Hodgkinson St and tickets can be bought at Mirage Hair, shop 3 Pier St, Dromana or call 5987 2536 or 0448 009 762.

Ferry launches bid for public support PUBLIC comment is being sought on plans to build a two-storey ferry terminal at Sorrento. The terminal is part of a $30 million upgrade at Sorrento and Queenscliff by ferry operator Searoad Ferries. “This is important infrastructure and we want to get it right. We want to hear from local people, ferry users, community groups and businesses,” CEO Matt McDonald said. Describing the terminal as a “once-in-a-generation proposal” Mr McDonald said the design would “provide safer access and better amenities for the local community and ferry users”. “If the proposal attracts community and government support it will include significant funding for upgrades for infrastructure along the Esplanade and to the Sorrento foreshore,” he said. “The proposal offers significant community benefits including better safety and pedestrian access to the pier, reduced road congestion, better connectivity with public transport, hundreds of new jobs, and a major economic boost for the region.” Mr McDonald said the Sorrento-Queenscliff ferry last year carried more than 800,000 passengers and 200,000 vehicles “making us the busiest passenger and car ferry service in Australia”. Ferry customers spent $100 million in the Sorrento and Queenscliff regions each year, supporting 781 full time jobs. “The number of visitors to the Mornington Peninsula is set to grow by 3.7 million by 2030. About eight per cent are expected to use the ferry service so we need to ensure we have the right infrastructure in place to manage that growth. “We are working closely with the Mornington Peninsula Shire Council on a significant infrastructure package around the Esplanade to improve traffic flows and safety in the area. We are also working with council and the state government to ensure there will be public transport access to and from the ferry terminal at Sorrento.” Mornington Peninsula Shire officers have told councillors that under present zonings the transport terminal at Sorrento should be run by Parks Victoria, but the shire is likely to agree to amend the planning scheme and override the prohibition. The proposed terminal will be 9.5 metres high and include a cafe, shop, souvenir shop, “Museum at the Bay” and offices for the ferry operator. The plan also includes a new ticketing building and a larger staff car park. The terminal will have a retractable boarding gantry for passengers to board the ferry directly from the building. Keith Platt

All aboard: An artist’s impression of the new ferry terminal planned for Sorrento. Image supplied by Searoad Ferries