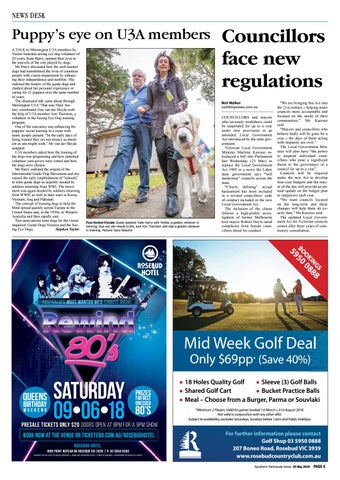 Puppy’s eye on U3A members A TALK to Mornington U3A members by Vision Australia seeing eye dog volunteer of 20 years, Kate Harry, opened their eyes to the marvels of the role played by dogs. Ms Harry discussed how the well-trained dogs had transformed the lives of countless people with vision-impairment by enhancing their independence and mobility. She outlined the history of the guide dogs and chatted about her personal experience in caring for 21 puppies over the same number of years. The illustrated talk came about through Mornington U3A ‘That was Then’ history coordinator Gus van der Heyde with the help of U3A member Ann Thornton, a volunteer in the Seeing Eye Dog training program. One of the outcomes was enhancing the puppies’ social training in a room with many people present. “In the early days of being trained they are not always as obedient as one might wish,” Mr van der Heyde quipped. U3A members asked how the training of the dogs was progressing and how potential volunteer care-givers were vetted and how the dogs were chosen. Ms Harry outlined the origins of the International Guide Dog Movement and discussed the early establishment of “schools” to train guide dogs so urgently needed by soldiers returning from WWI. The movement was again needed by soldiers returning from WWII, as well as later wars in Korea, Vietnam, Iraq and Pakistan. The concept of training dogs to help the blind spread quickly across Europe to the United States and, in the 1950s, to Western Australia and then rapidly east. Two associations train dogs for the vision impaired: Guide Dogs Victoria and the Seeing Eye Dogs. Stephen Taylor

“We are bringing this Act into the 21st century – helping make councils more accountable and focused on the needs of their communities,” Ms Kairouz said. “Mayors and councillors who behave badly will be gone for a year – the days of them acting with impunity are over.” The Local Government Minister will also have “the power to suspend individual councillors who pose a significant threat to the governance of a council for up to a year”. Councils will be required under the new Act to develop four-year budgets and the mayor of the day will provide an annual update on the budget plan to ratepayers each year. “We want councils focused on the long-term and these changes will help them do exactly that,” Ms Kairouz said. The updated Local Government Act for Victorian councils comes after three years of community consultation.