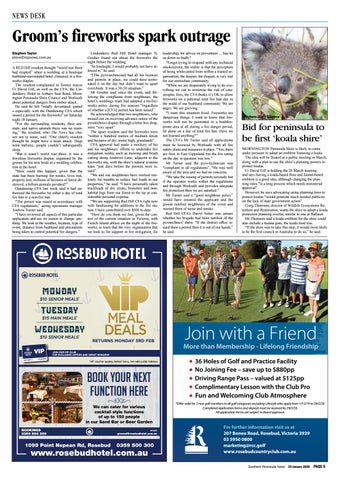 Groom’s fireworks spark outrage Stephen Taylor steve@mpnews.com.au A RED Hill resident thought “world war three had erupted” when a wedding at a boutique bushland-surrounded hotel climaxed in a fireworks display. The resident complained to former mayor Cr David Gill, as well as the CFA, the Lindenderry Hotel in Arthurs Seat Road, Mornington Peninsula Shire Council and Worksafe about potential dangers from ember attack. He said he felt “totally devastated; gutted – especially with the Dandenong CFA which issued a permit for the fireworks” on Saturday night 18 January. “For the surrounding residents, their animals, and native animals there was no warning,” the resident, who The News has chosen not to name, said. “One elderly resident thought he might have a heart attack. Dogs went ballistic, people couldn’t subsequently sleep. “But it wasn’t world war three, it was a frivolous fireworks display organised by the groom for his new bride at a wedding celebration at the hotel. “How could this happen, given that the state has been burning for weeks, lives lost, property lost, millions of hectares of forest destroyed, a billion animals perished?” Dandenong CFA last week said it had authorised the fireworks for either a day of total fire ban or a non-fire ban. “The permit was issued in accordance with CFA regulations,” acting operations manager Andrew Turner said. “I have reviewed all aspects of this particular application and see no reason to change anything. We look at the weather, location, type of event, distance from bushland and precautions being taken to control potential fire dangers.”

Lindenderry Red Hill Hotel manager Ty Goulter found out about the fireworks the night before the wedding. “In hindsight, I would probably not have allowed it,” he said. “[The pyro-technician] had all his licences and permits in place; we could have terminated it on the day but didn’t want to upset everybody. It was a 50-50 situation.” Mr Goulter said since the event, and following the complaints from neighbours, the hotel’s weddings team had adopted a no-fireworks policy during fire seasons “regardless of whether a [CFA] permit has been issued”. He acknowledged that two neighbours, who missed out on receiving advance notice of the pyrotechnics display through a letter box drop, were “very upset”. The upset resident said the fireworks were “within a hundred metres of medium forest and hectares of dry, metre high, grasslands”. CFA approval had made a mockery of his and his neighbours’ efforts to undertake fire mitigation works, such as mowing and brush cutting along Andrews Lane, adjacent to the fireworks site, with the shire’s natural systems team “just days before the permits were issued”. “We and our neighbours have worked tirelessly for months to reduce fuel loads in our properties,” he said. “I have personally taken truckloads of dry sticks, branches and nonhabitat logs from our forest to the tip at considerable personal expense. “We are supporting Red Hill CFA right now with fundraising for additions to the fire station. I have contributed over $500 to date. “How do you think we feel, given the context of the current situation in Victoria, with French Island ablaze on the night of the fireworks, to learn that the very organisation that we look to for support in fire mitigation, for

leadership, for advice on prevention … has let us down so badly? “Forget trying to respond with any technical smokescreen; the reality is that the perception of being white-anted from within a trusted organisation, the despair, the disgust, is very real for our immediate community. “While we are desperately trying to do everything we can to minimise the risk of catastrophic fires, the CFA thinks it’s OK to allow fireworks on a potential total fire ban day in the midst of our bushland community. We are angry. We are grieving. “I want this situation fixed. Fireworks are dangerous things. I want to know that fireworks will not be permitted in a bushfireprone area at all during a fire danger period, let alone on a day of total fire ban. Have we not learned anything?” The CFA’s Mr Turner said all applications must be licenced by Worksafe with all fire safety plans and measures in place. “Yes, there are fires in East Gippsland but the fire rating on the day in question was low.” Mr Turner said the pyro-technician was “compliant in all regulations”. “He was well aware of the area and we had no concerns. “We take the issuing of permits seriously but if the operator works within the regulations and through Worksafe and provides adequate fire protection then we are satisfied.” Mr Turner said a “good neighbour policy” would have ensured the applicant and the groom notified neighbours of the event and warned them of noise and smoke. Red Hill CFA’s Darryl Setter was unsure whether his brigade had been notified of the pyrotechnics’ show. “If the district office issued them a permit then it is out of our hands,” he said.

Bid for peninsula to be first ‘koala shire’ MORNINGTON Peninsula Shire is likely to come under pressure to adopt an emblem featuring a koala. The idea will be floated at a public meeting in March, along with a plan to use the shire’s planning powers to protect koalas. Cr David Gill is holding the 26 March meeting and says having a koala-based flora and faunal-based emblem is a good idea, although changing the planning rules “is a long process which needs ministerial approval”. However, he says advocating using planning laws to protect koalas “would generate much needed publicity on the lack of state government action”. Craig Thomson, director of Wildlife Ecosystems Retention and Restoration, wants the shire to adopt a koala protection planning overlay similar to one at Ballarat. Mr Thomson said a koala emblem for the shire could also include a manna gum, the koala food tree. “If the shire was to take this step, it would most likely to be the first council in Australia to do so,” he said.

Join with a Friend

More than Membership - Lifelong Friendship 36 Holes of Golf and Practice Facility No Joining Fee – save up to $880pp Driving Range Pass – valued at $125pp Complimentary Lesson with the Club Pro Fun and Welcoming Club Atmosphere *Oﬀer valid for 2 new golf members in all golf categories excluding Lifestyle who apply from 1/12/19 to 29/2/20. Completed application forms and deposit must be received by 29/2/20. All application forms are subject to Board approval.