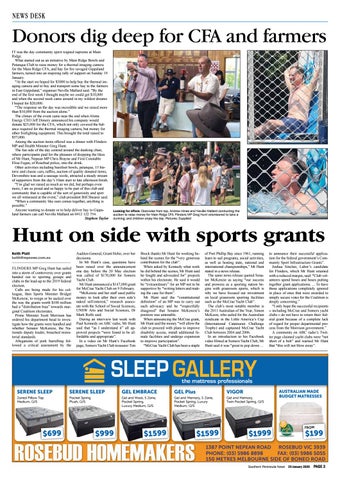 Donors dig deep for CFA and farmers IT was the day community spirit reigned supreme at Main Ridge. What started out as an initiative by Main Ridge Bowls and Petanque Club to raise money for a thermal imaging camera for the Main Ridge CFA, and hay for fire ravaged Gippsland farmers, turned into an inspiring rally of support on Sunday 19 January. “At the start we hoped for $5000 to help buy the thermal imaging camera and to buy and transport some hay to the farmers in East Gippsland,” organiser Neville Mallard said. “By the end of the first week I thought maybe we could get $10,000 and when the second week came around in my wildest dreams I hoped for $20,000. “The response on the day was incredible and we raised more than $10,000 from the auction alone.” The climax of the event came near the end when Alinta Energy CEO Jeff Dimery announced his company would donate $25,000 for the CFA, which not only covered the balance required for the thermal imaging camera, but money for other firefighting equipment. This brought the total raised to $57,000. Among the auction items offered was a dinner with Flinders MP and Health Minister Greg Hunt. The fun side of the day centred around the dunking chair, where participants paid for the pleasure of dropping the likes of Mr Hunt, Nepean MP Chris Brayne and First Constable Elisa Fegan, of Rosebud police, into the drink. Other activities including barefoot bowls, petanque, 15 historic and classic cars, raffles, auction of quality donated items, Devonshire teas and a sausage sizzle, attracted a steady stream of supporters from the day’s 10am start to late afternoon finish. “I’m glad we raised as much as we did, but perhaps even more, I am so proud and so happy to be part of this club and community that is capable of the sort of generosity and spirt we all witnessed at the event,” club president Bill Shearer said. “When a community like ours comes together, anything is possible.” Anyone wanting to donate or to help deliver hay to Gippsland farmers can call Neville Mallard on 0412 122 754. Stephen Taylor

Hunt on side with sports grants Keith Platt keith@mpnews.com.au FLINDERS MP Greg Hunt has sailed into a storm of controversy over grants handed out to sporting groups and clubs in the lead-up to the 2019 federal election. Calls are being made for his colleague, then Sports Minister Bridget McKenzie, to resign or be sacked over the way the grants worth $100 million had a “distribution bias” towards marginal Coalition electorates. Prime Minister Scott Morrison has ordered his department head to investigate how the grants were handled and whether Senator McKenzie, the Nationals deputy leader, breached ministerial standards. Allegations of pork barrelling followed a critical assessment by the

Auditor-General, Grant Hehir, over her decisions. In Mr Hunt’s case, questions have been raised over the announcement one day before the 20 May election was called of $170,000 for Somers Yacht Club. Mr Hunt announced a $147,000 grant for McCrae Yacht Club on 9 February. “McKenzie and her staff used public money to look after their own side’s naked self-interest,” research associate with the School of Social Sciences, UNSW Arts and Social Sciences, Dr Mark Rolfe said. During an interview last week with Paul Kennedy on ABC radio, Mr Hunt said that “as I understand it” all approved projects “were found to be affordable and appropriate”. In a video on Mr Hunt’s Facebook page, Somers Yacht Club treasurer Tim

Brock thanks Mr Hunt for working behind the scenes for the “very generous contribution for the club”. When asked by Kennedy what work he did behind the scenes, Mr Hunt said he fought and advocated for” projects within his electorate. He said it would be “extraordinary” for an MP not to be supportive by “writing letters and making the case for them”. Mr Hunt said the “constitutional definition” of an MP was to carry out such advocacy and he “respectfully disagreed” that Senator McKenzie’s position was untenable. When announcing the McCrae grant, Mr Hunt said the money “will allow the club to proceed with plans to improve disability access, install additional female facilities and undergo expansion to improve participation”. “McCrae Yacht Club has been a staple

of Port Phillip Bay since 1961, running learn to sail programs, social activities, as well as hosting state, national and international championships,” Mr Hunt stated in a news release. The same news release quoted Senator McKenzie as saying “our success and prowess as a sporting nation begins with grassroots sports, which is why we have focused our investment on local grassroots sporting facilities such as the McCrae Yacht Club”. The club’s most notable member is the 2011 Australian of the Year, Simon McKeon, who sailed for the Australian syndicate in the Little America’s Cup (International Catamaran Challenge Trophy) and captained McCrae Yacht Club between 2004 and 2006. In an introduction to his Facebook video filmed at Somers Yacht Club, Mr Hunt said it was “great to pop down …

to announce their successful application for the federal government’s Community Sport Infrastructure Grants”. Joshua Sinclair, Labor’s candidate for Flinders, which Mr Hunt retained with a reduced margin, said: “Club volunteers spend hours and hours putting together grant applications. ... To have those applications completely ignored in place of ones that were awarded to simply secure votes for the Coalition is deeply concerning.” “I only hope the successful recipients – including McCrae and Somers yacht clubs – do not have to return their federal grant because of a complete lack of regard for proper departmental process from the Morrison government.” A comments on ABC radio’s Twitter page claimed yacht clubs were “not short of a bob” and warned Mr Hunt that “this will not blow away”.