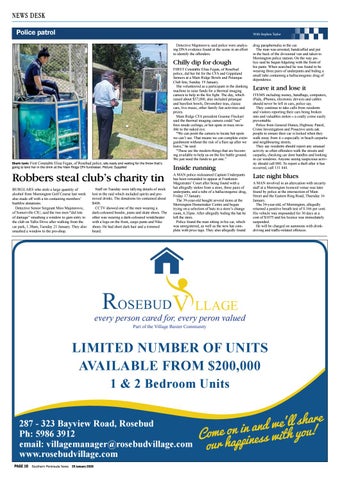 Detective Majstorovic said police were analysing DNA evidence found at the scene in an effort to identify the offenders.

Shark tank: First Constable Elisa Fegan, of Rosebud police, sits ready and waiting for the throw that’s going to land her in the drink at the Main Ridge CFA fundraiser. Picture: Supplied

Robbers steal club’s charity tin BURGLARS who stole a large quantity of alcohol from Mornington Golf Course last week also made off with a tin containing members’ bushfire donations. Detective Senior Sergeant Miro Majstorovic, of Somerville CIU, said the two men “did lots of damage” smashing a window to gain entry to the club on Tallis Drive after walking from the car park, 1.38am, Tuesday 21 January. They also smashed a window to the pro-shop.

Staff on Tuesday were tallying details of stock lost in the raid which included spirits and premixed drinks. The donations tin contained about $400. CCTV showed one of the men wearing a dark-coloured hoodie, jeans and skate shoes. The other was wearing a dark-coloured windcheater with a logo on the front, cargo pants and Nike shoes. He had short dark hair and a trimmed beard.

FIRST Constable Elisa Fegan, of Rosebud police, did her bit for the CFA and Gippsland farmers at a Main Ridge Bowls and Petanque Club fete, Sunday 19 January. She volunteered as a participant in the dunking machine to raise funds for a thermal imaging camera to help in the fire fight. The day, which raised about $57,000, also included petanque and barefoot bowls, Devonshire teas, classic cars, live music, other family fun activities and prizes. Main Ridge CFA president Graeme Flockart said the thermal imaging camera could “see” fires inside ceilings, or hot spots in trees invisible to the naked eye. “We can point the camera to locate hot spots we can’t see. That means we can complete extinguishment without the risk of a flare up after we leave,” he said. “These are the modern things that are becoming available to help us on the fire battle ground. We just need the funds to get one.”

Inside running A MAN police nicknamed Captain Underpants has been remanded to appear at Frankston Magistrates’ Court after being found with a hat allegedly stolen from a store, three pairs of underpants, and a tube of a hallucinogenic drug, Friday 17 January. The 39-year-old bought several items at the Mornington Homemaker Centre and began trying on a selection of hats in a store’s change room, 6.35pm. After allegedly hiding the hat he left the store. Police found the man sitting in his car, which was unregistered, as well as the new hat complete with price tags. They also allegedly found

drug paraphernalia in the car. The man was arrested, handcuffed and put in the back of the divisional van and taken to Mornington police station. On the way police said he began fidgeting with the front of his pants. When searched he was found to be wearing three pairs of underpants and hiding a small tube containing a hallucinogenic drug of dependence.

Leave it and lose it ITEMS including money, handbags, computers, iPads, iPhones, electronic devices and cables should never be left in cars, police say. They continue to take calls from residents and visitors reporting their cars being broken into and valuables stolen – a costly crime easily preventable. Police from General Duties, Highway Patrol, Crime Investigation and Proactive units ask people to ensure their car is locked when they walk away from it – especially in beach carparks and neighbouring streets. They say residents should report any unusual activity as often offenders walk the streets and carparks, checking car door handles and looking in car windows. Anyone seeing suspicious activity should call 000. To report a theft after it has occurred, call 131 444.

Late night blues A MAN involved in an altercation with security staff at a Mornington licenced venue was later found by police at the intersection of Main Street and the Eastern Ring Road, Thursday 16 January. The 34-year-old, of Mornington, allegedly returned a positive breath test of 0.166 per cent. His vehicle was impounded for 30 days at a cost of $1075 and his licence was immediately suspended. He will be charged on summons with drinkdriving and traffic-related offences.