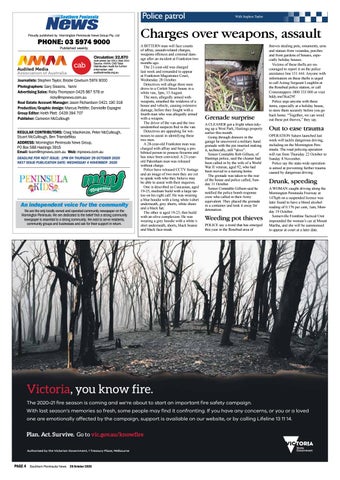 Charges over weapons, assault A BITTERN man will face counts of affray, assault-related charges, weapons offences and criminal damage after an incident at Frankston two months ago. The 21-year-old was charged last week and remanded to appear at Frankston Magistrates Court, Wednesday 28 October. Detectives will allege three men drove to a Corlett Street house in a white van, 3pm, 15 August. The men, allegedly armed with weapons, smashed the windows of a house and vehicle, causing extensive damage, before they fought with a fourth man who was allegedly armed with a weapon. The driver of the van and the two unidentified suspects fled in the van. Detectives are appealing for witnesses to assist in identifying these two men. A 28-year-old Frankston man was charged with affray and being a prohibited person to possess firearms and has since been convicted. A 23-yearold Pakenham man was released without charge. Police have released CCTV footage and an image of two men they are yet to speak with who they believe may be able to assist with their inquiries. One is described as Caucasian, aged 19-25, medium build with a large tattoo on his right calf. He was wearing a blue hoodie with a long white t-shirt underneath, grey shorts, white shoes and a black hat. The other is aged 19-25, thin build with an olive complexion. He was wearing a grey hoodie with a white tshirt underneath, shorts, black beanie and black face-mask.

Grenade surprise A CLEANER got a fright when tidying up a West Park, Hastings property earlier this month. Going through drawers in the garage he uncovered a military hand grenade with the pin inserted making it, technically, still “alive”. Senior Constable Rob Gillson, of Hastings police, said the cleaner had been called in by the wife of a World War II veteran, aged 92, who had been moved to a nursing home. The grenade was taken to the rear of the house and police called, Sunday 11 October. Senior Constable Gillson said he notified the police bomb response crew who called in their Army equivalent. They placed the grenade in a container and took it away for detonation.

thieves stealing pots, ornaments, urns and statues from verandas, porches and front gardens of houses, especially holiday houses. Victims of these thefts are encouraged to report it on the police assistance line 131 444. Anyone with information on these thefts is urged to call Acting Sergeant Loughlin at the Rosebud police station, or call Crimestoppers 1800 333 000 or visit bddy.me/3kut29f Police urge anyone with these items, especially at a holiday house, to store them securely before you go back home. “Together, we can weed out these pot thieves,” they say.

Out to ease trauma OPERATION Saturn launched last week will tackle dangerous driving, including on the Mornington Peninsula. The road policing operation will run from Thursday 22 October to Sunday 8 November. Police say the state-wide operation is aimed at preventing further trauma caused by dangerous driving.

Drunk, speeding A WOMAN caught driving along the Mornington Peninsula Freeway at 147kph on a suspended licence was later found to have a blood alcohol reading of 0.176 per cent, 1am, Monday 19 October. Somerville Frontline Tactical Unit impounded the woman’s car at Mount Martha, and she will be summonsed to appear at court at a later date.

Victoria, you know fire. The 2020-21 fire season is coming and we’re about to start an important fire safety campaign. With last season’s memories so fresh, some people may find it confronting. If you have any concerns, or you or a loved one are emotionally affected by the campaign, support is available on our website, or by calling Lifeline 13 11 14.