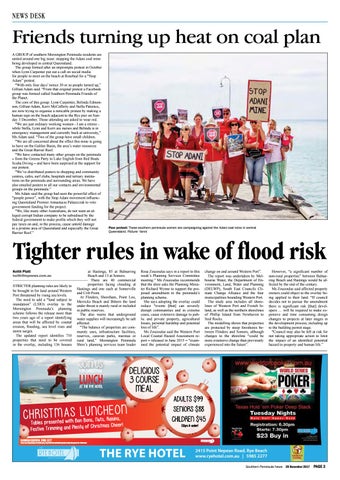 Friends turning up heat on coal plan A GROUP of southern Mornington Peninsula residents are united around one big issue: stopping the Adani coal mine being developed in central Queensland. The group formed after an impromptu protest in October when Lynn Carpenter put out a call on social media for people to meet on the beach at Rosebud for a “Stop Adani” protest. “With only four days’ notice 30 or so people turned up,” Gillian Adam said. “From that original protest a Facebook group was formed called Southern Peninsula Friends of the Planet. The core of this group: Lynn Carpenter, Belinda Edmonson, Gillian Adam, Kerri McCafferty and Stella Patience, are now trying to organise a noticable protest by making a human sign on the beach adjacent to the Rye pier on Sunday 3 December. Those attending are asked to wear red. “We are just ordinary working women - I am a retiree while Stella, Lynn and Kerri are nurses and Belinda is in emergency management and currently back at university,” Ms Adam said. “Two of the group have small children. “We are all concerned about the effect this mine is going to have on the Galilee Basin, the area’s water resources and the Great Barrier Reef. “We have contacted many other groups on the peninsula – from the Greens Party to Luke English from Red Boats Scuba Diving – and have been surprised at the support for our protest. “We’ve distributed posters to shopping and community centres, cafes, surf clubs, hospitals and tertiary institutions on the peninsula and surrounding areas. We have also emailed posters to all our contacts and environmental groups on the peninsula.” Ms Adam said the group had seen the powerful effect of “people power”, with the Stop Adani movement influencing Queensland Premier Annastacia Palaszczuk to veto government funding for the project. “We, like many other Australians, do not want an alleged corrupt Indian company to be subsidised by the federal government to make profits which they will not pay taxes on and, in the process, cause untold damage to a pristine area of Queensland and especially the Great Barrier Reef.”

Peer protest: These southern peninsula women are campaigning against the Adani coal mine in central Queensland. Picture: Yanni

Tighter rules in wake of flood risk Keith Platt keith@mpnews.com.au STRICTER planning rules are likely to be brought in for land around Western Port threatened by rising sea levels. The need to add a “land subject to inundation” (LSIO) overlay to the Mornington Peninsula’s planning scheme follows the release more than two years ago of a report identifying areas that will be affected by coastal erosion, flooding, sea level rises and storm surges. The updated report identifies 710 properties that need to be covered in the overlay, including 136 houses

at Hastings, 85 at Balnarring Beach and 13 at Somers. There are 40 commercial properties facing clouding at Hastings and one each at Somerville and Crib Point. At Flinders, Shoreham, Point Leo, Merricks Beach and Bittern the land under threat is mainly rural or included in public reserves. The also warns that underground water supplies will increasingly be salt affected. “The balance of properties are community uses, infrastructure facilities, reserves, caravan parks, marinas or rural land,” Mornington Peninsula Shire’s planning services team leader

Rosa Zouzoulas says in a report to this week’s Planning Services Committee meeting.” Ms Zouzoulas recommends that the shire asks the Planning Minister Richard Wynne to support the proposed amendment to the peninsula’s planning scheme. She says adopting the overlay could reduce “events [that] can severely disrupt communities and in extreme cases, cause extensive damage to public and private property, agricultural losses, personal hardship and potential loss of life”. Ms Zouzoulas said the Western Port Local Coastal Hazard Assessment report – released in June 2015 – “examined the potential impact of climate

change on and around Western Port”. The report was undertaken by Melbourne Water, the Department of Environment, Land, Water and Planning (DELWP), South East Councils Climate Change Alliance and the four municipalities bounding Western Port. The study area includes all shorelines of Western Port and French Island, as well as the northern shorelines of Phillip Island from Newhaven to Seal Rocks. The modelling shows that properties are protected by steep foreshores between Flinders and Somers, although changes to the shoreline “could be more extensive change than previously experienced into the future”.

However, “a significant number of non-rural properties” between Balnarring Beach and Hastings would be affected by the end of the century. Ms Zouzoulas said affected property owners could object to the overlay being applied to their land. “If council decides not to pursue the amendment there is significant risk [that] developers … will be required to make expensive and time consuming design changes to projects at later stages in the development process, including up to the building permit stage. “Council may also be left at risk for not taking appropriate action to limit the impact of an identified potential hazard to property and human life.”