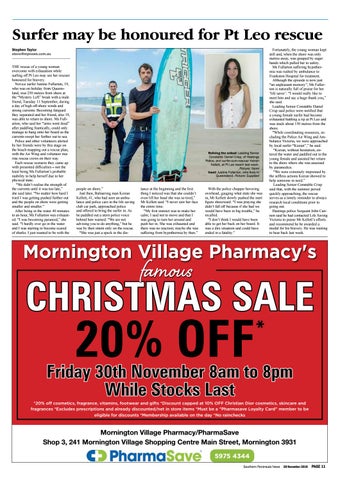 Surfer may be honoured for Pt Leo rescue Stephen Taylor steve@mpnews.com.au THE rescue of a young woman overcome with exhaustion while surfing off Pt Leo may see her rescuer honoured for bravery. Novice surfer Justine Fullarton, 19, who was on holiday from Queensland, was 250 metres from shore at the “Mystery Left” break with a male friend, Tuesday 11 September, during a day of high off-shore winds and strong currents. Becoming fatigued they separated and her friend, also 19, was able to return to shore. Ms Fullarton, who said her “arms went dead” after paddling frantically, could only manage to hang onto her board as the currents swept her further out to sea. Police and other volunteers alerted by her friends were by this stage on the beach mapping out a rescue plan, with the Air Wing and volunteer marine rescue crews on their way. Each rescue scenario they came up with presented difficulties – not the least being Ms Fullarton’s probable inability to help herself due to her physical state. “We didn’t realise the strength of the currents until it was too late,” she said later. “No matter how hard I tried I was getting pushed further out and the people on shore were getting smaller and smaller.” After being in the water 40 minutes to an hour, Ms Fullarton was exhausted. “I was becoming paranoid,” she said. “I hardly ever go in the water and I was starting to become scared of sharks. I just wanted to be with the

people on shore.” Just then, Balnarring man Keiran Kellett, 41, who had seen an ambulance and police cars in the life saving club car park, approached police and offered to bring the surfer in. As he paddled out a stern police voice behind him warned: “We are not advising you to do anything,” but he was by then intent only on the rescue. “She was just a speck in the dis-

tance at the beginning and the first thing I noticed was that she couldn’t even lift her head she was so tired,” Mr Kellett said. “I never saw her face the entire time. “My first instinct was to make her calm; I said not to move and that I was going to turn her around and push her in. She was exhausted and there was no reaction; maybe she was suffering from hypothermia by then.”

With the police chopper hovering overhead, gauging what state she was in, Mr Kellett slowly pushed the inert figure shoreward. “I was praying she didn’t fall off because if she had we would have been in big trouble,” he recalled. “I don’t think I would have been able to get her back on her board. It was a dire situation and could have ended in a fatality.”

Fortunately, the young woman kept still and, when the shore was only metres away, was grasped by eager hands which pulled her to safety. Ms Fullarton suffering hypothermia was rushed by ambulance to Frankston Hospital for treatment. Although the episode is now just “an unpleasant memory”, Ms Fullerton is naturally full of praise for her ‘life saver’: “I would really like to meet him and say a huge thank you,” she said. Leading Senior Constable Daniel Crisp said police were notified that a young female surfer had become exhausted battling a rip at Pt Leo and was stuck about 150 metres from the shore. “While coordinating resources, including the Police Air Wing and Ambulance Victoria, we were approached by local surfer “Kieran”,” he said. “Kieran, without hesitation, entered the water and paddled out to the young female and assisted her return to the shore where she was assessed by paramedics. “We were extremely impressed by the selfless actions Kieran showed to help someone in need.” Leading Senior Constable Crisp said that, with the summer period quickly approaching, the rescue serves as a timely reminder to always research local conditions prior to going out. Hastings police Sergeant John Cannon said he had contacted Life Saving Victoria to praise Mr Kellett’s efforts and recommend he be awarded a medal for his bravery. He was waiting to hear back last week.

Friday 30th November 8am to 8pm While Stocks Last *20% off cosmetics, fragrance, vitamins, footwear and gifts *Discount capped at 10% OFF Christian Dior cosmetics, skincare and fragrances *Excludes prescriptions and already discounted/net in store items *Must be a &quot;Pharmasave Loyalty Card&quot; member to be eligible for discounts *Membership available on the day *No rainchecks