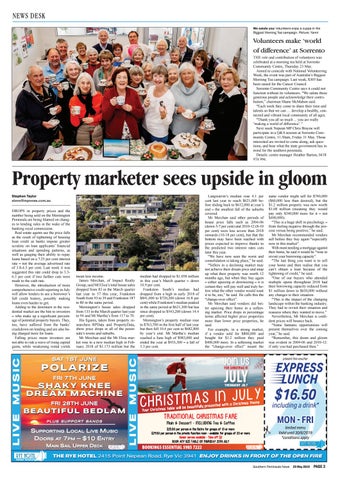 Volunteers make ‘world of difference’ at Sorrento THE role and contribution of volunteers was celebrated at a morning tea held at Sorrento Community Centre, Thursday 23 May. Aimed to coincide with National Volunteering Week, the event was part of Australia’s Biggest Morning Tea campaign. Last week, $305 has been raised for the Cancer Council. Sorrento Community Centre says it could not function without its volunteers. “We salute these generous people and acknowledge their contribution,” chairman Shane McMahon said. “Each week they come to share their time and talents so that we can … develop a healthy, connected and vibrant local community of all ages. “Thank you all so much ... you are really ‘making a world of difference’.” Next week Nepean MP Chris Brayne will participate in a Q&amp;A session at Sorrento Community Centre, 11.30am, Friday 31 May. Those interested are invited to come along, ask questions, and hear what the state government has in mind for the southern peninsula. Details: centre manager Heather Barton, 0418 974 994.

same vendor might sell for $740,000 ($60,000 less than desired), but the $1.2 million property was now worth $1.08 million (meaning they would pay only $340,000 more for it – not $400,000). “This is a huge shift in psychology – from feeling negative through the process versus being positive,” he said. Mr Merchan recommended vendors sell before they buy again “especially now in this market”. With most needing a mortgage against their home, he said it would be “wise to revisit your borrowing capacity”. “The last thing you want is to sell your home and then realise that you can’t obtain a loan because of the tightening of credit,” he said. “One of our buyers who attended multiple opens throughout 2018 had their borrowing capacity reduced from $1 million down to $650,000 without any changes to their situation. “This is the impact of the changing landscape within the banking industry. They had to revisit their situation and reassess where they wanted to move.” Nevertheless, Mr Merchan is confident prices will bounce back. “Some fantastic opportunities will present themselves over the coming year,” he said. “Remember, this doom and gloom was evident in 2004-06 and 2010-12: if only you had purchased then.” present this voucher

DROPS in property prices and the number being sold on the Mornington Peninsula are being blamed on changes to lending rules in the wake of the banking royal commission. Real estate agents see the price falls as the result of tightening of housing loan credit as banks impose greater scrutiny on loan applicants’ financial situations and spending patterns, as well as gauging their ability to repay loans based on a 7.25 per cent interest rate – not the average advertised rate of 3.8-4.5 per cent. Last week it was suggested this rate could drop to 5.56.5 per cent if two further cuts were made to the cash rate. However, the introduction of more comprehensive credit reporting in July will allow lenders to see a borrower’s full credit history, possibly making loans even harder to get. Adding to the downturn in the residential market are the hits to investors – who make up a significant percentage of potential property buyers. They, too, have suffered from the banks’ crackdown on lending and are also being charged more for loans. Falling prices mean investors are not able to ride a wave of rising capital gains, while weakening rental yields

Langwarrin’s median rose 4.1 per cent last year to reach $621,000 before sliding back to $612,000 at year’s end – the smallest fall of the suburbs covered. Mr Merchan said other periods of house price falls such as 2004-06 (down 5-7 per cent) and 2010-12 (8-10 per cent) were less severe than 2018 onwards (10-18 per cent), but that the bottom may have been reached with prices expected to improve thanks to the predicted two interest rates cuts later this year. “We have now seen the worst and consolidation is taking place,” he said. “Sellers in a declining market may not achieve their dream price and snap up what their property was worth 12 months ago, but when they buy again – either upsizing or downsizing – it is certain they will pay well and truly below what the other vendor would want it to be, too,” he said. He calls this the “change-over effect”. Mr Merchan said vendors did better upsizing their home in a softening market. Price drops in percentage terms affected higher price properties more than lower price properties, he said. For example, in a strong market, if a vendor sold for $800,000 and bought for $1.2 million they paid $400,000 more. In a softening market the “change-over effect” meant the