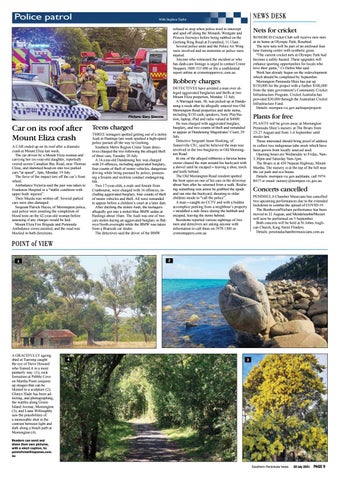 refused to stop when police tried to intercept and sped off along the Monash, Westgate and Princes freeways before being nabbed on the Geelong Ring Road at Fyansford, 11.15am. Several police units and the Police Air Wing were involved and no motorists or police were injured. Anyone who witnessed the incident or who has dash-cam footage is urged to contact Crime Stoppers 1800 333 000 or file a confidential report online at crimestoppersvic.com.au

Robbery charges DETECTIVES have arrested a man over alleged aggravated burglaries and thefts at two Mount Eliza properties, Monday 12 July. A Warragul man, 38, was picked up at Dandenong a week after he allegedly entered two Old Mornington Road properties and stole items, including $150 cash, speakers, Sony PlayStation, laptop, iPad and radio valued at $4000. He was charged with aggravated burglary, burglary, and two counts of theft and remanded to appear at Dandenong Magistrates’ Court, 29 July. Detective Sergeant Jason Hocking, of Somerville CIU, said he believed the man was involved in the two burglaries in Old Mornington Road. In one of the alleged robberies a furious home owner chased the man around his backyard with a shovel until he escaped – leaving a shoe, torch and knife behind. The Old Mornington Road resident spotted the boot open on one of his cars in the driveway about 9am after he returned from a walk. Realising something was amiss he grabbed the spade and ran into the backyard, shouting to older children inside to “call the police”. A man – caught on CCTV and with a hidden accomplice peeking from a neighbour’s property – straddled a side fence during the hubbub and escaped, leaving the items behind. Residents reported various sightings of two men and detectives are asking anyone with information to call them on 5978 1300 or crimestoppers.com.au

Car on its roof after Mount Eliza crash A CAR ended up on its roof after a dramatic crash at Mount Eliza last week. The car driven by a Mount Eliza woman and carrying her six-year-old daughter, reportedly veered across Canadian Bay Road, near Thomas Close, and slammed head-on into two parked cars “at speed”, 3pm, Monday 19 July. The force of the impact tore off the car’s front wheel. Ambulance Victoria said the pair was taken to Frankston Hospital in a “stable condition with upper body injuries”. Their Mazda was written off. Several parked cars were also damaged. Sergeant Patrick Hayes, of Mornington police, said police were awaiting the completion of blood tests on the 42-year-old woman before assessing if any charges would be laid. Mount Eliza Fire Brigade and Peninsula Ambulance crews assisted, and the road was blocked in both directions.

ROSEBUD Cricket Club will receive new nets at its home at Olympic Park, Rosebud. The new nets will be part of an enclosed four lane training centre with synthetic grass. “The current cricket nets at Olympic Park had become a safety hazard. These upgrades will enhance sporting opportunities for locals who love their game,” Cr Debra Mar said. Work has already begun on the redevelopment which should be completed by September. Mornington Peninsula Shire has put up $150,000 for the project with a further $100,000 from the state government’s Community Cricket Infrastructure Program. Cricket Australia has provided $30,000 through the Australian Cricket Infrastructure Fund. Details: mornpen.vic.gov.au/majorprojects

Plants for free PLANTS will be given away at Mornington Peninsula Shire’s nursery at The Briars from 25-27 August and from 1-4 September until stocks last. Those interested should bring proof of address to collect two indigenous tube stock which have been grown from locally sourced seed. Opening hours are Wednesday to Friday, 9am3.30pm and Saturday 9am-1pm. The Briars is at 450 Nepean Highway, Mount Martha. The nursery is at the top of the hill near the car park and eco house. Details: mornpen.vic.gov.au/plants, call 5974 8417 or email: nursery@mornpen.vic.gov.au

Concerts cancelled PENINSULA Chamber Musicians has cancelled two upcoming performances due to the extended lockdown to combat the spread of COVID-19. The Beethoven/Nielsen performance has been moved to 22 August, and Mendelssohn/Mozart will now be performed on 5 September. Both concerts will be held at St Johns Anglican Church, King Street Flinders. Details: peninsulachambermusicians.com.au

A GRACEFULLY ageing shed at Tuerong caught the eye of Steve Howard who framed it in a most painterly way (1); rock formation at Pebble Cove on Martha Point conjures up images that can be likened to a sculpture (2); Glenys Slade has been admiring, and photographing, the wattles along Green Island Avenue, Mornington (3); and Liane Willoughby saw the possibilities of a memorable shot in the contrast between light and dark along a beach path at Mornington (4).

Readers can send and share their own pictures, with a short caption, to: pointofview@mpnews.com. au Southern Peninsula News