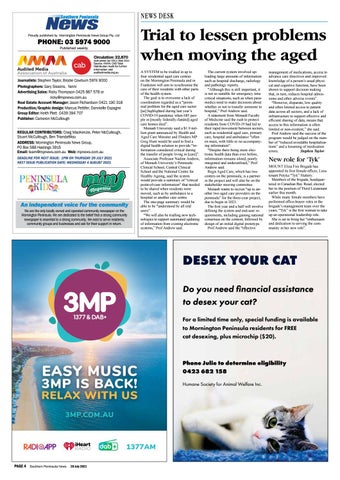 Trial to lessen problems when moving the aged A SYSTEM to be trialled in up to four residential aged care centres on the Mornington Peninsula and in Frankston will aim to synchronise the care of their residents with other parts of the health system. The goal is to overcome a lack of coordination regarded as a “perennial problem for the aged care sector [as] highlighted during last year’s COVID-19 pandemic when 685 people in [mostly federally-funded] aged care homes died”. Monash University said a $1.9 million grant announced by Health and Aged Care Minister and Flinders MP Greg Hunt would be used to find a digital health solution to provide “information considered critical during the transfer of people living in [care]”. Associate Professor Nadine Andrew, of Monash University’s Peninsula Clinical School, Central Clinical School and the National Centre for Healthy Ageing, said the system would provide a summary of “critical point-of-care information” that needed to be shared when residents were moved, such as by ambulance to a hospital or another care centre. The one-page summary would be able to be “understood by all end users”. “We will also be trialling new technologies to support automated updating of information from existing electronic systems,” Prof Andrew said.

The current system involved uploading large amounts of information such as hospital discharge, radiology and pathology reports. “Although this is still important, it is not so suitable for emergency time critical situations, such as when paramedics need to make decisions about whether or not to transfer someone to hospital,” Prof Andrew said. A statement from Monash Faculty of Medicine said the rush to protect residents from COVID-19 had led to their rapid movement between sectors, such as residential aged care, primary care, hospital and ambulance “often en mass, with little or no accompanying information”. “Despite there being more electronic health data than ever before, information remains siloed, poorly integrated and underutilised,” Prof Andrew said. Regis Aged Care, which has two centres on the peninsula, is a partner in the project and will also be on the stakeholder steering committee. Monash wants to recruit “up to another two aged care providers on the peninsula” for the three-year project, due to begin in 2023. The first year and a half will involve defining the system and end-user requirements, including gaining national consensus on the content, followed by design of an initial digital prototype. Prof Andrew said the “effective

management of medications, access to advance care directives and improved knowledge of a person’s usual physical and cognitive function, have been shown to support decision making that, in turn, reduces hospital admissions and other adverse events”. “However, disparate, low quality and often limited access to patient data across all sectors, and a lack of infrastructure to support effective and efficient sharing of data, means that access to this information is often limited or non-existent,” she said. Prof Andrew said the success of the program would be judged on the number of “reduced avoidable hospitalisations” and a lessening of medication errors. Stephen Taylor

New role for ‘Tyk’ MOUNT Eliza Fire Brigade has appointed its first female officer, Lieutenant Petyka “Tyk” Slattery. Members of the brigade, headquartered in Canadian Bay Road, elected her to the position of Third Lieutenant earlier this month. While many female members have performed office-bearer roles in the brigade’s management team over the years, “Tyk” is the first woman to take up an operational leadership role. She is set to bring her “enthusiasm and dedication to serving the community in her new role”.

DESEX YOUR CAT Do you need financial assistance to desex your cat? For a limited time only, special funding is available to Mornington Peninsula residents for FREE cat desexing, plus microchip ($20).