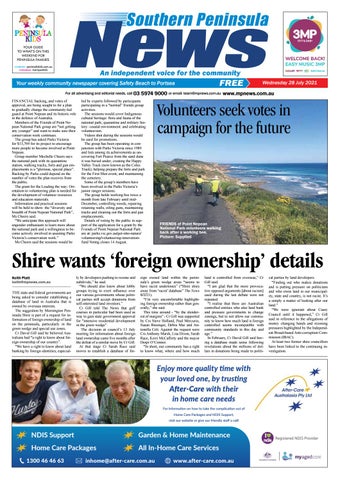 Southern Peninsula YOUR GUIDE TO WHAT’S ON THIS WEEKEND FOR PENINSULA FAMILIES FACEBOOK:

Your weekly community newspaper covering Safety Beach to Portsea For all advertising and editorial needs, call 03 FINANCIAL backing, and votes of approval, are being sought to for a plan to gradually change the community-led guard at Point Nepean and its historic role in the defence of Australia. Members of the Friends of Point Nepean National Park group are “not getting any younger” and want to make sure their conservation work continues. The group has asked Parks Victoria for $13,769 for its project to encourage more people to become involved at Point Nepean. Group member Mechelle Cheers says the national park with its quarantine station, walking tracks, forts and gun emplacements is a “glorious, special place”. Backing by Parks could depend on the number of votes the plan receives from the public. The grant for the Leading the way: Orientation to volunteering plan is needed for the development of volunteer resources and education materials. Information and practical sessions will be held to show the “diversity and breadth of Point Nepean National Park”, Ms Cheers said. “We anticipate this approach will engender enthusiasm to learn more about the national park and a willingness to become actively involved in assisting Parks Victoria’s conservation work.” Ms Cheers said the sessions would be

led by experts followed by participants participating in a “normal” friends group activities. The sessions would cover Indigenous cultural heritage: flora and fauna of the national park; quarantine and military history: coastal environment: and celebrating volunteerism. Videos shot during the sessions would be used for promotions. The group has been operating in conjunction with Parks Victoria since 1989 and lists among its achievements as uncovering Fort Pearce from the sand dune it was buried under; creating the Happy Valley Track (now known as the Coles Track); helping prepare the forts and park for the First Shot event; and maintaining the cemetery. Some of the group’s members have been involved in the Parks Victoria’s junior ranger sessions. The group holds working bee twice a month from late February until midDecember, controlling weeds, repairing retaining walls, oiling guns, maintaining tracks and cleaning out the forts and gun emplacements. Details of voting by the public in support of the application for a grant by the Friends of Point Nepean National Park are at: parks.vic.gov.au/get-into-nature/ volunteering/volunteering-innovationfund Voting closes 14 August.

Volunteers seek votes in campaign for the future

Shire wants ‘foreign ownership’ details Keith Platt keith@mpnews.com.au THE state and federal governments are being asked to consider establishing a database of land in Australia that is owned by overseas interests. The suggestion by Mornington Peninsula Shire is part of a request for information of foreign ownership of land on the peninsula, particularly in the green wedge and special use zones. Cr David Gill said he believed Australians had “a right to know about foreign ownership of our country”. “We have a right to know about land banking by foreign identities, especial-

ly by developers pushing to rezone and subdivide,” he said. “We should also know about lobby groups trying to exert influence over our various governments whose political parties still accept donations from self-interested land investors.” Cr Gill told The News that golf courses in particular had been used as way to gain state government approval for “intensive residential development in the green wedge”. The decision at council’s 13 July meeting for information about foreign land ownership came five months after the defeat of a similar move by Cr Gill. At that stage Cr Sarah Race said moves to establish a database of for-

eign owned land within the peninsula’s green wedge areas “seems to have racist undertones” (“Shire shies away from ‘racist’ database” The News 8/2/21). “I’m very uncomfortable highlighting foreign ownership rather than generally,” she said. This time around - “by the slenderest of margins” - Cr Gill was supported by Crs Steve Holland, Paul Mercurio, Susan Bissinger, Debra Mar and Antonella Celi. Against the request were Crs Anthony Marsh, Lisa Dixon, Sarah Race, Kerri McCafferty and the mayor Despi O’Connor. “In short, our community has a right to know what, where and how much

land is controlled from overseas,” Cr Gill said. “I am glad that the more provocative opposed arguments [about racism] used during the last debate were not repeated. “I realise that there are Australian controlled entities who also land bank and pressure governments to change zonings, but to not allow our community to know how much land is foreign controlled seems incompatible with community standards in this day and age.” In February, Cr David Gill said having a database made sense following revelations about the millions of dollars in donations being made to politi-

Enjoy more quality time with your loved one, by trusting After-Care with their in home care needs For information on how to take the complication out of Home Care Packages and NDIS Support, visit our website or give our friendly staff a call!

cal parties by land developers. “Finding out who makes donations and is putting pressure on politicians and who owns land in our municipality, state and country, is not racist. It’s a simply a matter of looking after our land.” “We were ignorant about Casey Council until it happened,” Cr Gill said in reference to the allegations of money changing hands and rezoning pressures highlighted by the Independent Broad-based Anti-corruption Commission (IBAC). At least two former shire councillors have been linked to the continuing investigation.