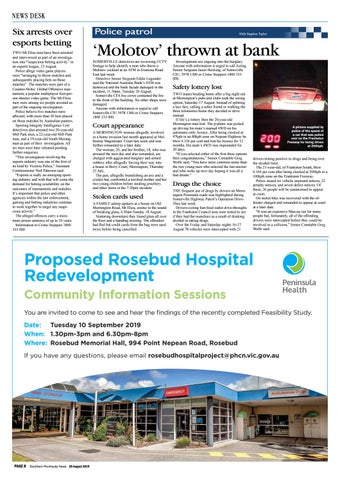 Six arrests over esports betting TWO Mt Eliza men have been arrested and interviewed as part of an investigation into “suspicious betting activity” in an esports league, 23 August. Police allege video game players were “arranging to throw matches and subsequently placing bets on those matches”. The matches were part of a Counter-Strike: Global Offensive tournament, a popular multiplayer first-person shooter video game. The Mt Eliza men were among six people arrested as part of the ongoing investigation. Police believe five matches were affected, with more than 20 bets placed on those matches by Australian punters. Sporting Integrity Intelligence Unit detectives also arrested two 20-year-old Mill Park men, a 22-year-old Mill Park man, and a 19-year-old South Morang man as part of their investigation. All six men were later released pending further enquiries. “This investigation involving the esports industry was one of the first of its kind by Victoria Police,” Assistant Commissioner Neil Paterson said. “Esports is really an emerging sporting industry and with that will come the demand for betting availability on the outcomes of tournaments and matches. It’s important that police and other agencies within the law enforcement, gaming and betting industries continue to work together to target any suspicious activity.” The alleged offences carry a maximum prison sentence of up to 10 years. Information to Crime Stoppers 1800 333 000.

SOMERVILLE detectives are reviewing CCTV footage to help identify a man who threw a Molotov cocktail at an ATM in Eramosa Road East last week. Detective Senior Sergeant Eddie Logonder said the National Australia Bank’s ATM was destroyed and the bank facade damaged in the incident, 11.50pm, Tuesday 20 August. Somerville CFA fire crews contained the fire to the front of the building. No other shops were damaged. Anyone with information is urged to call Somerville CIU 5978 1300 or Crime Stoppers 1800 333 000.

Court appearance A MORNINGTON woman allegedly involved in a home invasion last month appeared at Melbourne Magistrates’ Court last week and was further remanded to a later date. The woman, 20, and her brother, 18, who was arrested the next day and also remanded, are charged with aggravated burglary and armed robbery after allegedly forcing their way into a house in Berry Court, Mornington, Thursday 25 July. The pair, allegedly brandishing an axe and a cricket bat, confronted a terrified mother and her two young children before stealing jewellery and other items in the 7.20pm incident.

Stolen cards used A FAMILY asleep upstairs at a house on Old Mornington Road, Mt Eliza, awoke to the sound of breaking glass, 4.30am Sunday 18 August. Venturing downstairs they found glass all over the floor and a handbag missing. The offenders had fled but credit cards from the bag were used twice before being cancelled.

Investigations are ongoing into the burglary. Anyone with information is urged to call Acting Senior Sergeant Jason Hocking, of Somerville CIU, 5978 1300 or Crime Stoppers 1800 333 000.

Safety lottery lost TWO mates heading home after a big night out at Mornington’s pubs and clubs took the wrong option, Saturday 17 August. Instead of splitting a taxi fare, calling a sober friend or walking the three kilometres home they decided to drive instead. If life’s a lottery then the 20-year-old Mornington man lost: The p-plater was picked up driving his mate’s manual 4WD on his automatic-only licence. After being clocked at 97kph in an 80kph zone on Nepean Highway he blew 0.126 per cent and lost his licence for 12 months. His mate’s 4WD was impounded for 30 days. “If you selected either of the first three options then congratulations,” Senior Constable Greg Wolfe said. “You have more common sense than the two young men who selected the last answer and who woke up next day hoping it was all a bad dream.”

Drugs the choice THE frequent use of drugs by drivers on Mornington Peninsula roads was highlighted during Somerville Highway Patrol’s Operation DriveThru last week. Drivers exiting fast-food outlet drive-throughs in the Frankston Council area were tested to see if they had the munchies as a result of drinking alcohol or taking drugs. Over the Friday and Saturday nights 16-17 August 78 vehicles were intercepted with 21

A picture supplied by police of the speed of a car that was pulled over on the Frankston Freeway for being driven at 200kph.

drivers testing positive to drugs and being over the alcohol limit. The 21-year-old, of Frankston South, blew 0.164 per cent after being clocked at 200kph in a 100kph zone on the Frankston Freeway. Police issued six vehicle impound notices, 22 penalty notices, and seven defect notices. Of these, 26 people will be summonsed to appear at court. On stolen bike was recovered with the offender charged and remanded to appear at court at a later date. “It was an expensive Maccas run for many people but, fortunately, all of the offending drivers were intercepted before they could be involved in a collision,” Senior Constable Greg Wolfe said.

Proposed Rosebud Hospital Redevelopment Community Information Sessions You are invited to come to see and hear the findings of the recently completed Feasibility Study. Date: Tuesday 10 September 2019 When: 1.30pm-3pm and 6.30pm-8pm Where: Rosebud Memorial Hall, 994 Point Nepean Road, Rosebud If you have any questions, please email rosebudhospitalproject@phcn.vic.gov.au