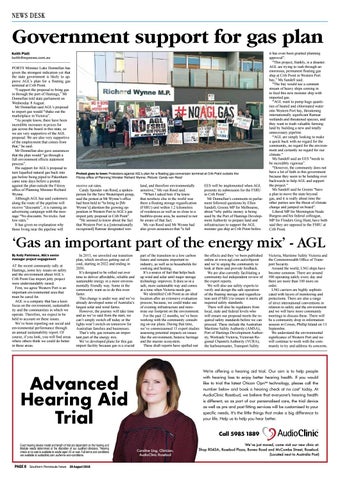 Government support for gas plan Keith Platt keith@mpnews.com.au PORTS Minister Luke Donnellan has given the strongest indication yet that the state government is likely to approve AGL’s plan for a floating gas terminal at Crib Point. “I support the proposal to bring gas in through the port of Hastings,” Mr Donnellan told state parliament on Wednesday 8 August. Mr Donnellan said AGL’s proposal to import gas would “shake out the marketplace in Victoria”. “As people know, there have been incredible increases in prices for gas across the board in this state, so we are very supportive of the AGL proposal. We are also very supportive of the employment that comes from that,” he said. Mr Donnellan also gave assurances that the plan would “go through a full environment effects statement process”. His support for AGL’s proposal to turn liquefied natural gas back into gas before being piped to Pakenham came nine days before a protest against the plan outside the Fitzroy office of Planning Minister Richard Wynne. Although AGL has said customers along the route of the pipeline will receive “discounts”, it is running an advertising campaign with the message “No discounts. No tricks. Just low rates.” It has given no explanation why those living near the pipeline will

receive cut rates. Candy Spender van Rood, a spokesperson for the Save Westernport group, said the protest at Mr Wynne’s office had been held to “to bring to [Mr Wynne’s] attention the growing opposition in Western Port to AGL’s gas import jetty proposal in Crib Point”. “He seemed to know about the fact that Western Port is a [internationally recognised] Ramsar designated wet-

land, and therefore environmentally sensitive,” Ms van Rood said. “When I asked him if he knew that nowhere else in the world was there a floating storage regasification (FSRU) unit within 1.2 kilometres of residences as well as so close to a bushfire-prone area, he seemed to not be aware of that fact. Ms van Rood said Mr Wynne had also given assurances that “a full

EES will be implemented when AGL presents its submission for the FSRU in Crib Point”. Mr Donnellan’s comments in parliament followed questions by Ellen Sandell, Greens MP for Melbourne, about “why public money is being used by the Port of Hastings Development Authority to prepare land and infrastructure to support the AGL monster gas ship at Crib Point before

it has even been granted planning approval”. “This project, frankly, is a disaster. AGL are trying to rush through an enormous, permanent floating gas ship at Crib Point in Western Port bay,” Ms Sandell said. “The bay would see a constant stream of heavy ships coming in to feed this new monster ship with imported gas. “AGL want to pump huge quantities of heated and chlorinated water into Western Port bay, threatening internationally significant Ramsar wetlands and threatened species, and they want to trash valuable farming land by building a new and totally unnecessary pipeline. “AGL are simply looking to make a quick buck with no regard for the community, no regard for the environment and certainly no regard for our climate.” Ms Sandell said an EES “needs to be incredibly rigorous”. “However, the community does not have a lot of faith in this government because they seem to be bending over backwards to help AGL and support the project.” Ms Sandell said he Greens “have a plan to move the state beyond gas, and it is really about time the other parties saw the threat of climate change and jumped on board”. Liberal MP for Mornington Neale Burgess and his federal colleague, MP for Flinders Greg Hunt, have both said they are opposed to the FSRU at Crib Point.

AT the recent community rally at Hastings, some key issues on safety and the environment about AGL’s Crib Point Gas import jetty project were understandably raised. First, we agree Western Port is an important environmental area that must be cared for. AGL is a company that has a keen focus on the environment, sustainability and the communities in which we operate. Therefore, we expect to be held to account on these issues. We’ve been reporting our social and environmental performance through an annual sustainability report. Of course, if you look, you will find areas where others think we could do better in these areas.

In 2015, we unveiled our transition plan, which involves getting out of coal, starting in 2022 and ending in 2050. It’s designed to be rolled out over time to deliver affordable, reliable and sustainable energy in a more environmentally friendly way. Some in the community want us to do this even faster. This change is under way and we’ve already developed some of Australia’s largest solar and wind farms. However, the journey will take time and as we’ve said from the start, we can’t simply switch off today or the lights won’t switch on tomorrow for Australian families and businesses. That’s why gas remains an important part of the energy mix. We’ve developed plans for this gas import facility because gas is a crucial

part of the transition to a low carbon future and remains important to industry, as well as to households for cooking and heating. It’s a source of fuel that helps back up wind and solar until major storage technology improves. It does so in a safe, more sustainable way and comes at a time when Victoria needs gas. We identified Crib Point as an ideal location after an extensive evaluation process; because, we could make use of existing infrastructure and minimise our footprint on the environment. For the past 12 months, we’ve been working with the community consulting on our plans. During that time, we’ve commissioned 15 expert studies assessing potential impacts on issues like the environment, historic heritage and the marine ecosystem. These draft reports have spelled out

the effects and they’ve been published online at www.agl.com.au/cribpoint and we’re urging the community to look at them and provide feedback. We are also currently facilitating a community-led independent review of the expert reports. We will also use safety experts to verify and design the safe operation of the floating storage and regasification unit (FSRU) to ensure it meets all required safety standards. There will also be regulators from local, state and federal levels who will ensure our proposal meets the required safety standards before we can proceed. These include the Australian Maritime Safety Authority (AMSA), Port of Hastings Development Authority, Worksafe Victoria, Victorian Regional Channels Authority (VCRA), the harbourmaster, Transport Safety

Victoria, Maritime Safety Victoria and the Commonwealth Office of Transport Security. Around the world, LNG ships have become common. There are around 500 operating safely every day and there are more than 100 more on order. LNG carriers are highly sophisticated with layers of monitoring and protections. There are also a range of strict international conventions in relation to safety and the environment and we will have more community meetings to discuss these. There will be a community drop in information session in Cowes, Phillip Island on 13 September. We understand the environmental significance of Western Port and we will continue to work with the community to try and address its concerns.

We’re offering a hearing aid trial. Our aim is to help people with hearing loss to enjoy better hearing health. If you would like to trial the latest Oticon OpnTM technology, please call the number below and book a hearing check at no cost* today. At AudioClinic Rosebud, we believe that everyone’s hearing health is different, so as part of our personalised care, the trial device as well as pre and post fitting services will be customised to your specific needs. It’s the little things that make a big difference to your life. Help us to help you hear better.

Call 5985 1889 Exact hearing device model and length of trial are dependent on the hearing and lifestyle needs determined at the discretion of our qualified clinicians. *Hearing check at no cost is available to adults aged 26 or over. Full terms and conditions are available at audioclinic.com.au/terms-and-conditions.