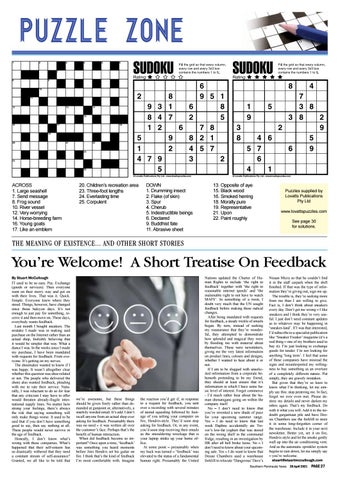 You’re Welcome! A Short Treatise On Feedback By Stuart McCullough IT used to be so easy. Pay. Exchange (goods or services). Then everyone went on their merry way and got on with their lives. That was it. Quick. Simple. Everyone knew where they stood. Things, however, have changed since those halcyon days. It’s not enough to just pay for something, receive it and then move on. These days, everybody wants feedback. Last month I bought sneakers. The mistake I made was in making said purchase on the Internet rather than an actual shop, foolishly believing that it would be simpler that way. What a dunce I was. In the weeks since I made my purchase, I have been inundated with requests for feedback. From everyone. It’s getting on my nerves. The shoemaker wanted to know if I was happy. It wasn’t altogether clear whether this question was shoe-related or not. The people who delivered the shoes also wanted feedback, pleading with me to rate their service. Naturally, I was reluctant to do so for fear that any criticism I may have to offer would threaten already-fragile international supply lines. No matter how strong your feelings, there’s always the risk that saying something will only make things worse. It used to be said that if you don’t have something good to say, then say nothing at all. These people would never survive in the age of feedback. Honestly, I don’t know what’s wrong with these companies. What’s happened that their self-esteem has so drastically withered that they need a constant stream of self-assurance? Granted, we all like to be told that

we’re awesome, but these things should be given freely rather than demanded at gunpoint or, alternatively, a snarkily worded email. It’s odd. I don’t recall anyone from an actual shop ever asking for feedback. Presumably there was no need – it was written all over the customer’s face. Perhaps that’s the benefit of human interaction. When did feedback become so important? Once upon a time, ‘feedback’ was something you heard moments before Jimi Hendrix set his guitar on fire. I think that’s the kind of feedback I’m most comfortable with. Imagine

the reaction you’d get if, in response to a request for feedback, you sent over a recording with several minutes of atonal squealing followed by footage of you setting your computer on fire, Hendrix-style. They’d soon stop asking for feedback. Or, in any event, you’d soon stop receiving their emails as the smouldering wreckage that is your laptop stinks up your home office. At some point – presumably when my back was turned – ‘feedback’ was elevated to the status of a fundamental human right. Presumably the United

Nations updated the Charter of Human Rights to include ‘the right to feedback’ together with ‘the right to reasonable internet speeds’ and ‘the inalienable right to not have to watch MAFS’. In something of a twist, I doubt very much that the UN sought feedback before making these radical changes. After being inundated with requests for feedback, a steady trickle of emails began. By now, instead of seeking my reassurance that they’re wonderful, they attempted to demonstrate how splendid and magical they were by flooding me with material about themselves. These were newsletters, giving me the very latest information on product lines, colours and designs, whether I wanted to hear about it or not. If I am to be slugged with unsolicited information from a corporate behemoth pretending to be my friend, they should at least ensure that it’s information in which I have some basic level of interest. Forget commerce - I’d much rather hear about the human shenanigans going on within the company itself. No – I don’t need to know that you’ve invented a new shade of puce for your upcoming summer range. Yes – I do need to know that last week Daphne accidentally ate Trevor’s low-fat yoghurt that was stored on the wrong shelf in the communal fridge, resulting in an investigation by HR after all hell broke loose. No – I don’t need to know about your upcoming sale. Yes – I do want to know that Dessie Chambers used a warehouse forklift to relocate ‘Dangerous’ Dave’s

Nissan Micra so that he couldn’t find it in the staff carpark when the shift finished. If that was the type of information they’re giving out, sign me up. The trouble is, they’re seeking more from me than I am willing to give. Fact is, I don’t think about sneakers every day. Don’t get me wrong – I like sneakers and I think they’re very useful. I just don’t need constant updates as to whatever may be happening in ‘sneaker-land’. If I was that interested, I’d subscribe to a specialist publication like ‘Sneaker Freaker’ magazine (it’s a real thing – one of my brothers used to buy it). I’m just looking to exchange goods for tender. I’m not looking for anything ‘long term’. I feel that some of these companies have misread the signs and misinterpreted my willingness to buy something as an overture of a completely different nature. Put simply, they are gravely mistaken. But given that they’re so keen to know what I’m thinking, let me simply say this: stop pestering me. In fact, forget we ever even met. Please destroy my details and never darken my inbox again. That’s my feedback. Do with it what you will. Add it to the nodoubt gargantuan pile and have Dessie Chambers use the forklift to store it in some long-forgotten corner of the warehouse. Include it in your next newsletter. Better yet, set it on fire, Hendrix-style and let the smoke gently waft up into the air conditioning vent. And as the automatic sprinkler system begins to rain down, let me simply say – you’re welcome. stuart@stuartmccullough.com