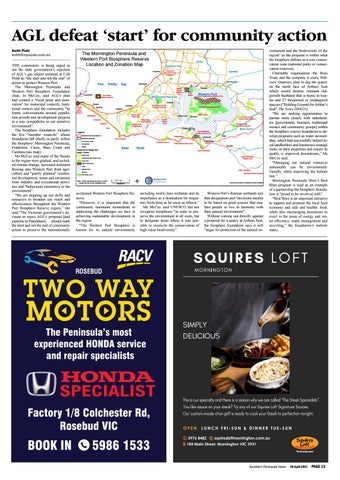 AGL defeat ‘start’ for community action Keith Platt keith@mpnews.com.au THE community is being urged to see the state government’s rejection of AGL’s gas import terminal at Crib Point as “the start and not the end” of action to protect Western Port. The Mornington Peninsula and Western Port Biosphere Foundation chair, Jo McCoy, said AGL’s plan had created a “focal point and motivation” for municipal councils, traditional owners and the community “to frame conversations around population growth and development projects in a way sympathetic to our sensitive environment”. The biosphere foundation includes the five “member councils” whose boundaries fall wholly or partly within the biosphere: Mornington Peninsula, Frankston, Casey, Bass Coast and Cardinia (see map). Ms McCoy said many of the threats to the region were gradual, and included climate change, increased sediment flowing into Western Port from agriculture and “poorly planned” residential development, waste and emissions from industry and recreational activities and “behaviours insensitive to the environment”. “We are stepping up our skills and resources to broaden our reach and effectiveness throughout the Western Port Biosphere Reserve region,” she said.“The Victorian government’s decision to reject AGL’s proposal [and pipeline to Pakenham] … should mark the start and not the end of community action to preserve the internationally

Reserves In Stage One

including world class wetlands and its importance as a destination for migratory birds from as far away as Siberia.” Ms McCoy said UNESCO did not recognise biospheres “in order to preserve the environment at all costs, but to designate areas where it was possible to reconcile the conservation of high value biodiversity”.

Western Port’s Ramsar wetlands met that designation and “decisions needed to be based on good science that enables people to live in harmony with their natural environment”. Without coming out directly against a proposal for a quarry at Arthurs Seat, the biosphere foundation says it will “argue for protection of the natural en-

vironment and the biodiversity of the region” as the proposal is within what the biosphere defines as a core conservation zone (national parks or conservation reserves). Charitable organisation the Ross Trust, and the company it owns, Hillview Quarries, plan to dig the quarry on the north face of Arthurs Seat which would destroy remnant oldgrowth bushland that is home to koalas and 27 threatened or endangered species (“Holding Ground for Arthur’s Seat” The News 20/4/21). “We are seeking opportunities to partner more closely with stakeholders [government, business, traditional owners and community groups] within the biosphere reserve boundaries to develop programs such as water stewardship, which had successfully helped local landholders and businesses manage water on their properties and ensure its quality is improved downstream,” Ms McCoy said. “Managing our natural resources sustainably can be environmentfriendly, while improving the bottom line.” Mornington Peninsula Shire’s Best Bites program is used as an example of a partnership the biosphere foundation is “proud to be involved with”. “Best Bites is an important initiative to support and promote the local food economy and safe and healthy food, while also encouraging businesses to excel in the areas of energy and water efficiency, waste management and recycling,” the foundation’s website states.