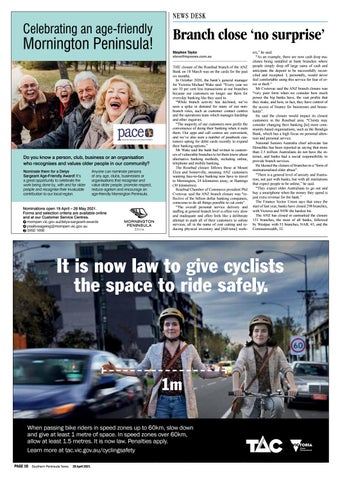 Do you know a person, club, business or an organisation who recognises and values older people in our community? Nominate them for a Delys Sargeant Age-Friendly Award! It’s a great opportunity to celebrate the work being done by, with and for older people and recognise their invaluable contribution to our local region.

Anyone can nominate persons of any age, clubs, businesses or organisations that recognise and value older people; promote respect, reduce ageism and encourage an age-friendly Mornington Peninsula.

Nominations open 19 April – 28 May 2021. Forms and selection criteria are available online and at our Customer Service Centres. mornpen.vic.gov.au/delys-sargeant-awards positiveageing@mornpen.vic.gov.au 5950 1698

Branch close ‘no surprise’ Stephen Taylor steve@mpnews.com.au THE closure of the Rosebud branch of the ANZ Bank on 18 March was on the cards for the past six months. In October 2020, the bank’s general manager for Victoria Michael Wake said: “Every year we see 10 per cent less transactions at our branches because our customers no longer use them for everyday banking like they used to. “While branch activity has declined, we’ve seen a spike in demand for many of our nonbranch roles, such as customer contact centres and the operations team which manages hardship and other inquiries. “The majority of our customers now prefer the convenience of doing their banking when it suits them. Our apps and call centres are convenient, and we’ve also seen a number of passbook customers opting for debit cards recently to expand their banking options.” Mr Wake said the bank had written to customers of vulnerable branches to let them know about alternative banking methods, including online, telephone and mobile banking. The Rosebud closure follows those at Mount Eliza and Somerville, meaning ANZ customers wanting face-to-face banking now have to travel to Mornington, 24 kilometres away, or Hastings (30 kilometres). Rosebud Chamber of Commerce president Phil Cvetovac said the ANZ branch closure was “reflective of the billion dollar banking companies, conscious to do all things possible to cut costs”. “The overall personal service delivery and staffing at general branch level is often very slow and inadequate and often feels like a deliberate attempt to push all of their customers to online services, all in the name of cost cutting and reducing physical inventory and [full-time] work-

ers,” he said. “As an example, there are now cash drop machines being installed at bank branches where people simply drop off large sums of cash and anticipate the deposit to be successfully reconciled and receipted. I, personally, would never feel comfortable using this service for fear of error or theft.” Mr Cvetovac said the ANZ branch closure was “very poor form when we consider how much power the big banks have, the vast profits that they make, and how, in fact, they have control of the access of finance for businesses and households”. He said the closure would impact its closest customers in the Rosebud area. “Clients may consider changing their banking [to] more community-based organisations, such as the Bendigo Bank, which has a high focus on personal attention and personal service. National Seniors Australia chief advocate Ian Henschke has been reported as saying that more than 2.5 million Australians do not have the internet, and banks had a social responsibility to provide branch services. He likened the closure of branches to a “form of institutionalised elder abuse”. “There is a general level of anxiety and frustration, not just with banks, but with all institutions that expect people to be online,” he said. “They expect older Australians to go out and buy a smartphone when the money they spend is just extra revenue for the bank.” The Finance Sector Union says that since the start of last year, banks have closed 298 branches, with Victoria and NSW the hardest hit. The ANZ has closed or earmarked the closure 131 branches, the most of all banks, followed by Westpac with 53 branches, NAB, 45, and the Commonwealth, 32.

It is now law to give cyclists the space to ride safely. Penalties apply.

When passing bike riders in speed zones up to 60km, slow down and give at least 1 metre of space. In speed zones over 60km, allow at least 1.5 metres. It is now law. Penalties apply. Learn more at tac.vic.gov.au/cyclingsafety PAGE 10