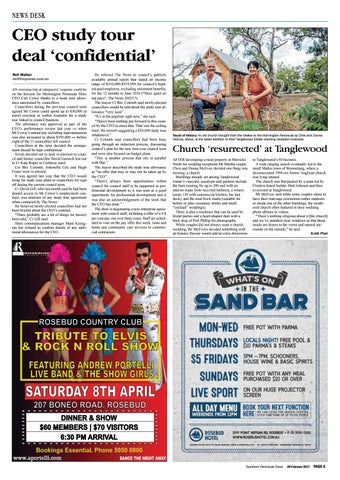 CEO study tour deal ‘confidential’ Neil Walker neil@mpnews.com.au AN overseas trip at ratepayers’ expense could be on the horizon for Mornington Peninsula Shire CEO Carl Cowie thanks to a study tour allowance sanctioned by councillors. Councillors during the previous council term agreed Mr Cowie could spend up to $30,000 to travel overseas or within Australia for a study tour linked to council business. The allowance was approved as part of the CEO’s performance review last year — when Mr Cowie’s annual pay including superannuation was also increased to about $395,000 — before eight of the 11 councillors left council. Councillors at the time decided the arrangement should be kept confidential. Seven decided not to seek re-election to council and former councillor David Garnock lost out to Cr Kate Roper in Cerberus ward. Crs Bev Colomb, Antonella Celi and Hugh Fraser were re-elected. It was agreed last year that the CEO would bring his study tour plans to councillors for sign off during the current council term. Cr David Gill, who last month said he had been denied access to Mr Cowie’s employment contract, was unaware of any study tour agreement when contacted by The News. He believed newly-elected councillors had not been briefed about the CEO’s contract. “There probably are a lot of things we haven't been told,” Cr Gill said. Shire communications manager Mark Kestigian has refused to confirm details of any additional allowances for the CEO.

He referred The News to council’s publicly available annual report that stated an income range of $310,000-$319,999 for council’s highest-paid employee, excluding retirement benefits, for the 12 months to June 2016 (“Shire quiet on top pays”, The News 20/2/17). The mayor Cr Bev Colomb said newly-elected councillors would be told about the study tour allowance “very soon”. “It’s in the pipeline right now,” she said. "There's been nothing put forward to this council by the CEO to enact that. That was the ceiling limit. We weren't suggesting a $30,000 study tour whatsoever.” Cr Colomb said councillors had been busy going through an induction process, discussing council’s plan for the new four-year council term and were also focused on budget plans. "This is another process that sits in parallel with that.” The mayor described the study tour allowance as “an offer that may or may not be taken up by the CEO”. "There's always been opportunities within council for council staff to be supported in professional development so it was seen as a good opportunity for professional development and it was also an acknowledgement of the work that the CEO has done.” The shire is negotiating a new enterprise agreement with council staff, including a offer of a 6.8 per cent pay rise over three years. Staff are scheduled to vote on the pay offer this week. tions and home and community care services to commercial contractors.

Touch of history: An old church brought from the Mallee to the Mornington Peninsula by Chris and Donna McEvoy, above, is the latest addition to their Tanglewood Estate wedding reception business.

Church ‘resurrected’ at Tanglewood AFTER developing a rural property at Merricks North for wedding receptions Mt Martha couple Chris and Donna McEvoy decided one thing was missing: a church. Buildings already set among Tanglewood Estate’s vineyard, eucalypts and gardens include the barn (seating for up to 200 and with an interior made from recycled timbers); a winery (seats 130 with commercial kitchen, bar and deck); and the mud brick studio (suitable for before or after ceremony drinks and small “cocktail” weddings). There is also a residence that can be used by bridal parties and a heart-shaped dam with a back drop of Port Phillip for photographs. While couples did not always want a church wedding, the McEvoys decided something with an historic flavour would add an extra dimension

to Tanglewood’s 60 hectares. A wide ranging search eventually led to the small Mallee town of Woomelang, where a deconsecrated 1906 era former Anglican church was lying unused. The church was flat-packed by a team led by Flinders-based builder Matt Johnson and then re-erected at Tanglewood. Mr McEvoy said while some couples chose to have their marriage ceremonies either outdoors or inside one of the other buildings, the weathered church often featured in their wedding photo albums or videos. “There’s nothing religious about it [the church] and we’ve installed clear windows so that those inside are drawn to the views and natural surrounds on the outside,” he said. Keith Platt