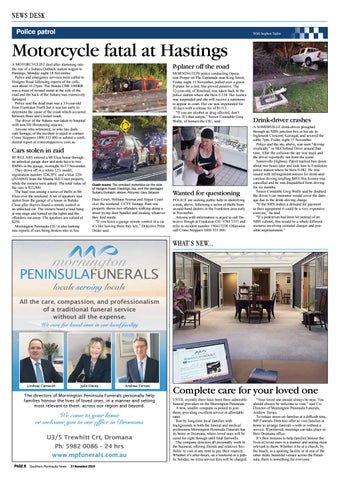 Motorcycle fatal at Hastings A MOTORCYCLIST died after slamming into the rear of a Subaru Outback station wagon in Hastings, Monday night 18 November. Police and emergency services were called to Hodgins Road following reports of the collision about 10.25pm. The Honda CBR 1000RR was a mass of twisted metal at the side of the road and the back of the Subaru was extensively damaged. Police said the dead man was a 33-year-old from Frankston North but it was too early to determine the cause of the crash which occurred between Boes and Coolart roads. The driver of the Subaru was taken to hospital with non-life threatening injuries. Anyone who witnessed, or who has dashcam footage, of the incident is urged to contact Crime Stoppers 1800 333 000 or submit a confidential report at crimestoppersvic.com.au

P-plater off the road MORNINGTON police conducting Operation Proper on The Esplanade near King Street, Friday night 15 November, pulled over a green P-plater for a test. She proved positive. The 32-year-old, of Rosebud, was taken back to the police station where she blew 0.158. Her licence was suspended and she will receive a summons to appear in court. Her car was impounded for 30 days with a release fee of $1315. “If you are alcohol or drug affected, don’t drive. It’s that simple,” Senior Constable Greg Wolfe, of Somerville CIU, said.

Cars stolen in raid BURGLARS entered a Mt Eliza house through an unlocked garage door and stole keys to two BMWs in the garage, overnight 16-17 November. They drove off in a white 125i model, registration number 1DK5PY, and a blue 320i (ZOA069) from the Manna Hill Court property while the owners were asleep. The total value of the cars is $55,000. The haul was among a series of thefts in Mt Eliza over the weekend. A set of speakers was stolen from the garage of a house in Buloke Close after thieves found a remote control in an unlocked car. The owners heard a loud bang at one stage and turned on the lights and the offenders ran away. The speakers are valued at $250. Mornington Peninsula CIU is also looking into reports of cars being broken into in Sea

Crash scene: The wrecked motorbike on the side of Hodgins Road, Hastings, top, and the damaged Subaru Outback, above. Pictures: Gary Sissons

Haze Court, Volitans Avenue and Angus Court over the weekend. CCTV footage from one property shows two offenders walking along a street trying door handles and stealing whatever they find inside. “If you leave a garage remote control in a car it’s like leaving them they key,” Detective Peter Drake said.

Wanted for questioning POLICE are seeking public help in identifying a man, above, following a series of thefts from second-hand dealers in the Frankston area early in November. Anyone with information is urged to call Detective Hough at Frankston CIU 9784 5555 and refer to incident number 190415258. Otherwise call Crime Stoppers 1800 333 000.

Drink-driver crashes A SOMERVILLE drink-driver ploughed through an NBN junction box in his ute in Inglenook Crescent, Karingal, and severed the cable 7pm, Friday night 15 November. Police said the ute, above, was seen “driving erratically” in McClelland Drive around that time. After the collision the ute was stuck and the driver reportedly ran from the scene. Somerville Highway Patrol tracked him down about two hours later and took him to Frankston police station where he blew 0.082. He was issued with infringement notices for drink-andcareless driving totalling $893. His licence was cancelled and he was disqualified from driving for six months. Senior Constable Greg Wolfe said he doubted the driver’s car insurance would cover the damage due to the drink-driving charge. “If the NBN makes a demand for payment to their equipment it could be a very expensive exercise,” he said. “If a pedestrian had been hit instead of an NBN cabinet, this would be a whole different scenario involving criminal charges and possible imprisonment.”

locals serving locals All the care, compassion, and professionalism of a traditional funeral service without all the expense. We care for loved ones in our local facility

The directors of Mornington Peninsula Funerals personally help families honour the lives of loved ones, in a manner and setting most relevant to them, across our region and beyond.

Complete care for your loved one UNTIL recently there have been three admirable funeral providers on the Mornington Peninsula. A new, smaller company is poised to join them; providing excellent service at affordable rates. Run by long-time local families with backgrounds in both the funeral and medical professions Mornington Peninsula Funerals has its home in Dromana, where loved ones will be cared for right through until final farewells. The company directors all personally work in the business; offering friends and relatives flexibility to visit at any time to pay their respects. Whether it’s after-hours, on a weekend or a public holiday, no extra service fees will be charged.

“Your loved one should always be near. You should always be welcome to visit.” said CoDirector of Mornington Peninsula Funerals, Andrew Ternes. To reduce stress on families at a difficult time, MP Funerals Directors offer to visit families at home to arrange funerals – with or without a service. If preferred, meetings can take place in their Dromana office. It’s their mission to help families honour the lives of loved ones in a manner and setting most relevant to them. Whether it be at a church, by the beach, in a sporting facility or at one of the other many beautiful venues across the Peninsula, there is something for everyone.