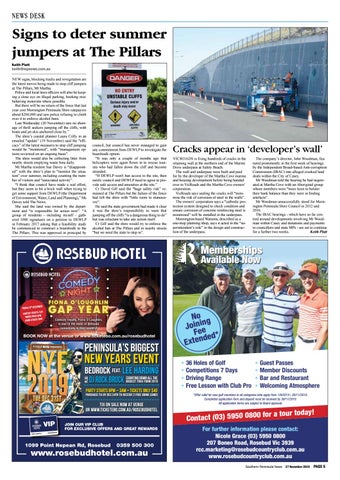 Signs to deter summer jumpers at The Pillars Keith Platt keith@mpnews.com.au NEW signs, blocking tracks and revegetation are the latest moves being made to stop cliff jumpers at The Pillars, Mt Martha. Police and local laws officers will also be keeping a close eye on illegal parking, booking misbehaving motorists where possible. But there will be no return of the fence that last year cost Mornington Peninsula Shire ratepayers about $200,000 and saw police refusing to climb over it to enforce alcohol bans. Last Wednesday (20 November) saw no shortage of thrill seekers jumping off the cliffs, with boats and jet skis anchored close by.” The shire’s coastal planner Laura Crilly in an emailed “update” (19 November) said the “efficacy” of the latest measures to stop cliff jumping would be “monitored”, with “management options reviewed on an ongoing basis”. The shire would also be collecting litter from nearby streets emptying waste bins daily. Mt Martha resident Sue Davey is “disappointed” with the shire’s plan to “monitor the situation” over summer, including counting the number of visitors and “associated activity”. “I think that council have made a real effort, but they seem to hit a brick wall when trying to get some support from DEWLP (the Department of Environment, Water, Land and Planning),” Ms Davey told The News. She said the land was owned by the department and “is responsible for action now”. “A group of residents - including myself - gathered 1000 signatures on a petition to DEWLP in February 2017 asking that a feasibility study be commenced to construct a boardwalk to the The Pillars. This was approved in principal by

council, but council has never managed to gain any commitment from DEWLP to investigate the boardwalk option. “It was only a couple of months ago that helicopters were again flown in to rescue tourists who had fallen down the cliff and become stranded. “If DEWLP won&#39;t ban access to the site, then surely council and DEWLP need to agree to provide safe access and amenities at the site.” Cr David Gill said the “huge safety risk” remained at The Pillars but the failure of the fence had left the shire with “little room to manoeuvre”. He said the state government had made it clear it was the shire’s responsibility to warn that jumping off the cliffs “is a dangerous thing to do” but was reluctant to take any action itself. Cr Gill said the shire would try to enforce the alcohol ban at The Pillars and in nearby streets “but we need the state to step in”.

Cracks appear in ‘developer’s wall’ VICROADS is fixing hundreds of cracks in the retaining wall at the northern end of the Marine Drive underpass at Safety Beach. The wall and underpass were built and paid for by the developer of the Martha Cove marina and housing development before being handed over to VicRoads and the Martha Cove owners’ corporation. VicRoads says sealing the cracks will “minimise the risk of corrosion of steel in the walls”. The owners’ corporation says a “cathodic protection system designed to check condition and ensure corrosion of concrete reinforcing steel is minimised” will be installed in the underpass. Mornington-based Watsons, described as a one-stop planning shop, says it acted in the “superintendent’s role” in the design and construction of the underpass.

The company’s director, John Woodman, featured prominently in the first week of hearings by the Independent Broad-based Anti-corruption Commission (IBAC) into alleged crooked land deals within the City of Casey. Mr Woodman told the hearing he had negotiated at Martha Cove with an Aboriginal group whose members were “more keen to bolster their bank balance than they were in finding artefacts”. Mr Woodman unsuccessfully stood for Mornington Peninsula Shire Council in 2012 and 2016. The IBAC hearings - which have so far centred around developments involving Mr Woodman within Casey and donations and payments to councillors and state MPs - are set to continue for a further two weeks. Keith Platt

BOOK NOW at the venue or www.ticketebo.com.au/rosebudhotel PRESENTS

BEDROCK FEAT. LEE HARDING COUNTING DOWN ALL THE

TIX ON SALE NOW AT VENUE OR WWW.TICKETEBO.COM.AU/ROSEBUDHOTEL

DOWN ALL THE BIGGEST TRAX FROM 2019 DJ ROCK BROCK COUNTING

TIX ON SALE NOW AT VENUE OR WWW.TICKETEBO.COM.AU/ROSEBUDHOTEL

for a tour today!