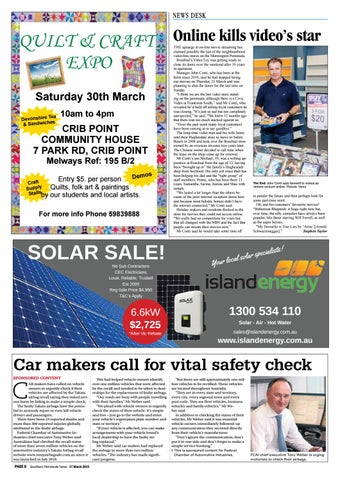 THE upsurge in on-line movie streaming has claimed possibly the last of the neighbourhood video-hire stores on the Mornington Peninsula. Rosebud’s Video Ezy was getting ready to close its doors over the weekend after 10 years in operation. Manager John Conti, who has been at the helm since 2010, said he had stopped hiring out movies on Thursday 21 March and was planning to shut the doors for the last time on Sunday. “I think we are the last video store standing on the peninsula, although there is a Civic Video at Frankston South,” said Mr Conti, who revealed he’d held off telling loyal customers he was closing. “It’s just so sad but not completely unexpected,” he said. “We knew 12 months ago that there was too much stacked against us. “Over the past week many loyal customers have been coming in to say goodbye.” The long-time video man and his wife Jenny sold their Hughesdale store to move to Safety Beach in 2008 and took over the Rosebud store owned by an overseas investor two years later. The Chinese owner decided to call time when the lease on the shop came up for renewal. Mr Conti’s son Michael, 19, was a willing apprentice at Rosebud from the age of 12, having been “brought up in” the family’s Hughesdale shop from boyhood. His only job since then has been helping his dad and the “tight group” of staff members: Penny, who has been there 13 years, Samantha, Sarina, Justine and Shae with rentals. “We lasted a lot longer than the others because of the poor internet reception down here and because most holiday homes didn’t have the internet connected,” Mr Conti said. Holiday makers and residents flocked to the store for movies they could not access online. “We really had no competition for years but that all changed with the NBN and the fact that people can stream their movies now.” Mr Conti said he would take some time off

to ponder the future and then perhaps look for some part-time work. Oh, and his customers’ favourite movies? “Bohemian Rhapsody is huge right now but, over time, the silly comedies have always been popular, like those starring Will Ferrell, as well as the super heroes. “My favourite is True Lies by ‘Arnie’ [Arnold Schwarzenegger].” Stephen Taylor

Car makers call for vital safety check SPONSORED CONTENT AR makers have called on vehicle owners to urgently check if their vehicles are affected by the Takata airbag recall saying they risked serious harm by failing to make a simple check. The faulty Takata airbags have the potential to seriously injure or even kill vehicle drivers and passengers. There have been 24 reported deaths and more than 300 reported injuries globally attributed to the faulty airbags. Federal Chamber of Automotive Industries chief executive Tony Weber said Australians had checked the recall status of more than seven million vehicles on the automotive industry’s Takata Airbag recall website www.ismyairbagsafe.com.au since it was launched in July 2018.

This had helped vehicle owners identify over one million vehicles that were affected by the recall and needed to be taken to dealerships for the replacement of faulty airbags. “Our roads are busy with people travelling with their families,” Mr Weber said. "We plead with vehicle owners to urgently check the status of their vehicle. It’s simple and free – just go to the website and enter your vehicle’s registration plate number and state or territory.” “If your vehicle is affected, you can make arrangements with your vehicle brand’s local dealership to have the faulty airbag replaced.” Mr Weber said car makers had replaced the airbags in more than two million vehicles. “The industry has made significant progress.

"But there are still approximately one million vehicles to be rectified. These vehicles are located throughout Australia. "They are in every state and territory, every city, every regional town and every post code. They are fleet vehicles, business vehicles and family vehicles," Mr Weber said. In addition to checking the status of their vehicles, Mr Weber said it was essential vehicle owners immediately followed-up any communication they received directly from their vehicle’s manufacturer. “Don’t ignore the communication, don’t put it to one side and don’t forget to make a simple service booking.” ■ This is sponsored content for Federal Chamber of Automotive Industries.