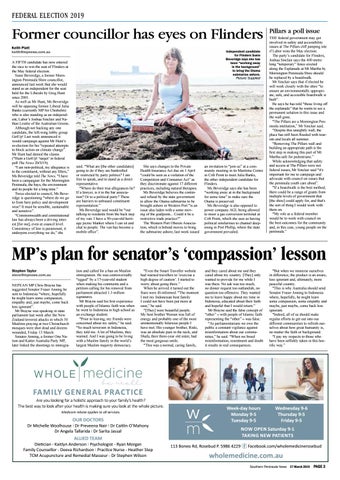 Former councillor has eyes on Flinders Keith Platt keith@mpnews.com.au A FIFTH candidate has now entered the race to win the seat of Flinders at the May federal election. Susie Beveridge, a former Mornington Peninsula Shire councillor, announced last week that she would stand as an independent for the seat held for the Liberals by Greg Hunt since 2001. As well as Mr Hunt, Ms Beveridge will be opposing former Liberal Julia Banks (currently MP for Chisholm) who is also standing as an independent, Labor’s Joshua Sinclair and Nathan Lesslie of the Australian Greens. Although not backing any one candidate, the left-wing lobby group GetUp! Last week announced it would campaign against Mr Hunt’s re-election for his “repeated attempts to block action on climate change”. Mr Hunt had denied the claims (“Hunt a GetUp! ‘target’ in federal poll The News 20/3/19). “I am non-political, my allegiance is to the constituent, without any filters,” Ms Beveridge told The News. “I have been a campaigner for the Mornington Peninsula, the bays, the environment and its people for a long time.” Twice elected to council, Ms Beveridge is questioning “where do we go to from here policy and development wise? It must be sensible, sustainable and sensitive”. “Commonwealth and constitutional law has always been a driving interest [for me], even at council level. Consistency of law is paramount; it underpins everything we do,” she

Independent candidate for Flinders Susie Beveridge says she has been “working away in the background” to bring the Otama submarine ashore. Picture: Supplied

said. “What are [the other candidates] going to do if they are bankrolled or restricted by party politics? I am free to speak, and to stand as a direct representative. “Where do their true allegiances lie? If a lawyer, is it to the bar association? Or to a political party? These are barriers to unbiased constituent representation.” Ms Beveridge said would be “out talking to residents from the back step of my van. I have a 50-year-old heritage picnic blanket where I can sit and chat to people. The van has become a mobile office”.

She says changes to the Private Health Insurance Act due on 1 April “could be seen as a violation of the Competition and Consumer Act” as they discriminate against 17 different practices, including natural therapies. Ms Beveridge believes the continued refusal by the state government to allow the Otama submarine to be brought ashore in Western Port “is an issue also laden with a some moving of the goalposts... Could it be a restrictive trade practice?” The Western Port Oberon Association, which is behind moves to bring the submarine ashore, last week issued

an invitation to “join us” at a community meeting in its Maritime Centre in Crib Point to meet Julia Banks, the other independent candidate for Flinders. Ms Beveridge says she has been “working away at in the background for some time” to make sure the Otama is preserved. Ms Beveridge is also opposed to power company AGL being allowed to moor a gas conversion terminal at Crib Point, which she sees as having political similarities to channel deepening in Port Phillip, where the state government prevailed.

Pillars a poll issue THE federal government may get involved in safety and accessibility issues at The Pillars cliff jumping site if Labor wins the May election. The party’s candidate for Flinders, Joshua Sinclair says the 400 metre long “temporary” fence erected along the Esplanade at Mt Martha by Mornington Peninsula Shire should be replaced by a boardwalk. Mr Sinclair says that if elected he will work closely with the shire “to ensure an environmentally appropriate, safe, and accessible boardwalk is built”. He says he has told “those living off the esplanade” that he wants to see a permanent solution to this issue and the wall gone. “The Pillars are a Mornington Peninsula institution,” Mr Sinclair said. “Despite this unsightly wall, the place has still been flooded with tourists and locals all summer. “Removing The Pillars wall and building an appropriate path is the first step in making this part of Mt Martha safe for pedestrians.” While acknowledging that safety and access at The Pillars were not federal issues, Mr Sinclair said “it's important for me to campaign and advocate with council on issues that the peninsula youth care about”. “If a boardwalk is the best method, there could be a range of grants from multiple levels of government that [the shire] could apply for, and that's the sort of thing I would work with them on. “My role as a federal member would be to work with council on the best outcomes for the community and, in this case, young people on the peninsula.”

tion and called for a ban on Muslim immigration. He was controversially “egged” by a 17-year-old student when making his comments and a petition calling for his removal from parliament attracted 1.3 million signatures. Mr Brayne said his first experience with people of Islamic faith was when he went to Indonesia in high school as an exchange student. “Prior to leaving, my friends were concerned about my safety,” he said. “So much terrorism in Indonesia, they told me. A lot of Muslims, they warned. And I was going to be living with a Muslim family in the world’s largest Muslim majority democracy.

“Even the Smart Traveller website had warned travellers to ‘exercise a high degree of caution’. I started to worry about going there.” When he arrived it turned out the fears were ill-informed. “The moment I met my Indonesian host family I could not have been put more at ease,” he said. “[They] were beautiful people. My host brother Wawan was full of energy and probably one of the most unintentionally hilarious people I have met. His younger brother, Riski, was an absolute pain in the neck, and Shafa, their three-year old sister, had the most gorgeous smile. “This was a normal, caring family,

and they cared about me and they cared about my country. [They] only wanted to provide for me while I was there. No ask was too much, no dinner request too outlandish, no question too offensive. They wanted me to leave happy about my time in Indonesia, educated about their faith and hopeful that I would return.” Mr Brayne said the false concept of “other” – with people of Islamic faith representing the “other” – was false. “As parliamentarians we owe the public a constant vigilance against misinformation about our communities,” he said. “When we breed misinformation, resentment and doubt it results in real consequences.

“But when we immerse ourselves in difference, the product is an aware, less ignorant and, ultimately, more peaceful country. “This is why Australia should send Senator Fraser Anning to Indonesia where, hopefully, he might learn some compassion, some empathy and maybe, just maybe, come back less ignorant. “Indeed, all of us should make regular efforts to get out into our different communities to refresh ourselves about how great humanity is, no matter the faith or background. “I pay my respects to those who have been selfishly taken in this horrific way.”

FAMILY GENERAL PRACTICE Are you looking for a holistic approach to your family’s health? The best way to look after your health is making sure you look at the whole picture. Medicare rebate applies to all services.

esize to M14 and make