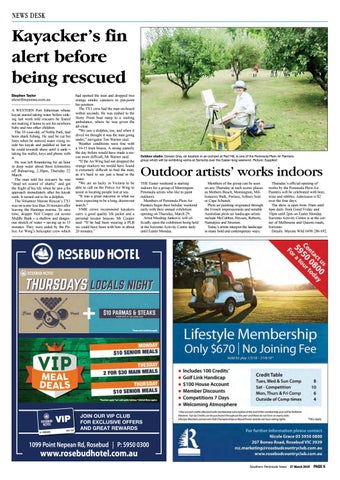 Kayacker’s fin alert before being rescued Stephen Taylor steve@mpnews.com.au A WESTERN Port fisherman whose kayak started taking water before sinking last week told rescuers he feared not making it home to see his newborn baby and two other children. The 35-year-old, of Noble Park, had been shark fishing. He said he cut his lines when he noticed water rising inside his kayak and paddled as fast as he could towards shore until it sank – taking his wallet, keys and phone with it. He was left floundering for an hour in deep water about three kilometres off Balnarring, 2.30pm, Thursday 22 March. The man told his rescuers he was “dead set scared of sharks” and got the fright of his life when he saw a fin approach immediately after his kayak sunk. It turned out to be a dolphin. The Volunteer Marine Rescue’s TX1 was on scene less than 30 minutes after leaving the Hastings marina. To save time, skipper Neil Cooper cut across Middle Bank – a shallow and dangerous stretch of water – saving up to 15 minutes. They were aided by the Police Air Wing’s helicopter crew which

had spotted the man and dropped two orange smoke canisters to pin-point his position. The TX1 crew had the man on-board within seconds. He was rushed to the Stony Point boat ramp to a waiting ambulance, where he was given the all-clear. “We saw a dolphin, too, and when it dived we thought it was the man going under,” navigator Tim Warner said. Weather conditions were fine with a 10-15 knot breeze. A strong easterly the day before would have made a rescue more difficult, Mr Warner said. “If the Air Wing had not dropped the orange markers we would have found it extremely difficult to find the man, as it’s hard to see just a head in the water. “We are so lucky in Victoria to be able to call on the Police Air Wing to assist in locating people lost at sea. “It was a great outcome in what we were expecting to be a long, drawn-out search.” VMR crews recommend kayakers carry a good quality life jacket and a personal locator beacon. Mr Cooper said: “If he had been wearing a PLB we could have been with him in about 20 minutes.”

Outdoor studio: Doreen Grey, on location in an orchard at Red Hill, is one of the Peninsula Plein Air Painters group which will be exhibiting works at Sorrento over the Easter long weekend. Picture: Supplied

Outdoor artists’ works indoors THE Easter weekend is starting indoors for a group of Mornington Peninsula artists who like to paint outdoors. Members of Peninsula Plein Air Painters begin their holiday weekend early with their annual exhibition opening on Thursday, March 29. Artist Miodrag Jankovic will officially open the exhibition being held at the Sorrento Activity Centre daily until Easter Monday.

Members of the group can be seen on any Thursday at such scenic places as Mothers Beach, Mornington, Millionaires Walk, Portsea, Arthurs Seat or Cape Schanck. Plein air painting originated through the French impressionists and notable Australian plein air landscape artists include McCubbin, Heysen, Roberts, Namatjira and Streeton. Today’s artists interpret the landscape in many bold and contemporary ways.

Thursday’s official opening of works by the Peninsula Plein Air Painters will be celebrated with beer, wine and nibbles. Admission is $2 over the four days. The show is open from 10am until 4pm daily from Good Friday and 10pm until 2pm on Easter Monday. Sorrento Activity Centre is at the corner of Melbourne and Queens roads, Sorrento. Details: Maxine Wild 0490 286 692.