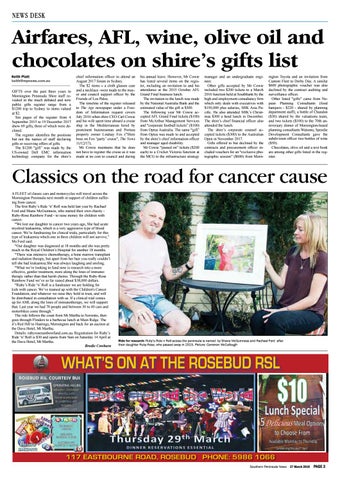 Airfares, AFL, wine, olive oil and chocolates on shire’s gifts list Keith Platt keith@mpnews.com.au GIFTS over the past three years to Mornington Peninsula Shire staff revealed in the much debated and now public gifts register range from a $1200 trip to Sydney to items valued at $2. Ten pages of the register from 4 September 2015 to 19 December 2017 show 69 gifts, three of which were declined. The register identifies the positions but not the names of staff declaring gifts or receiving offers of gifts. The $1200 “gift” was made by the US-owned Dell EMC information technology company for the shire’s

chief information officer to attend an August 2017 forum in Sydney. The $2 items – a cloth glasses case and a necklace -were made to the mayor and council support officer by the Friends of Los Palos. The timeline of the register released to The Age newspaper under a Freedom of Information request covers July 2016 when shire CEO Carl Cowie and his wife spent time aboard a cruise ship in the Mediterranean hired by prominent businessman and Portsea property owner Lindsay Fox ("Shire boss on Fox ‘party’ cruise", The News 11/12/17). Mr Cowie maintains that he does not have to register the cruise as it was made at no cost to council and during

his annual leave. However, Mr Cowie has listed several items on the register, including an invitation to and his attendance at the 2015 October AFL Grand Final business lunch. The invitation to the lunch was made by the National Australia Bank and the estimated value of the gift is $300. The following year Mr Cowie accepted AFL Grand Final tickets ($100) from McArthur Management Services and “corporate football tickets” ($100) from Optus Australia. The same “gift” from Optus was made to and accepted by the shire’s chief information officer and manager aged disability. Mr Cowie “passed on” tickets ($200 each) to a Cricket Victoria function at the MCG to the infrastructure strategy

manager and an undergraduate engineer. Other gifts accepted by Mr Cowie included two $200 tickets to a March 2016 function held at Southbank by the high end employment consultancy firm which only deals with executives with $150,000 plus salaries, SHK Asia Pacific. He also attended SHK’s Christmas $300 a head lunch in December. The shire’s chief financial officer also attended the lunch. The shire’s corporate counsel accepted tickets ($300) to the Australian Open in November 2017. Gifts offered to but declined by the contracts and procurement officer included vouchers for an “exclusive photographic session” ($600) from Morn-

ington Toyota and an invitation from Custom Fleet to Derby Day. A similar $600 photographic voucher was also declined by the contract auditing and surveillance officer. Other listed “gifts” came from Nepean Planning Consultants (food hampers - $220 - shared by planning department staff); a bottle of Chandon ($30) shared by the valuations team; and two tickets ($100) to the 70th anniversary dinner of Mornington-based planning consultants Watsons; Speedie Development Consultants gave the subdivision officer two bottles of wine ($50). Chocolates, olive oil and a text book are among other gifts listed in the register.

Classics on the road for cancer cause A FLEET of classic cars and motorcycles will travel across the Mornington Peninsula next month in support of children suffering from cancer. The first Ruby’s Ride ‘n’ Roll was held last year by Rachael Ford and Shane McGuinness, who started their own charity Ruby-Rose Rainbow Fund - to raise money for children with cancer. “We lost our daughter to cancer two years ago, She had acute myeloid leukaemia, which is a very aggressive type of blood cancer. We’re fundraising for clinical trials, particularly for this type of leukaemia which one in three children will not survive,” Ms Ford said. “Our daughter was diagnosed at 18 months and she was pretty much in the Royal Children’s Hospital for another 18 months. “There was intensive chemotherapy, a bone marrow transplant and radiation therapy, but apart from her hair you really couldn’t tell she had leukaemia.She was always laughing and smiling. “What we’re looking to fund now is research into a more effective, gentler treatment, more along the lines of immunotherapy rather than that harsh chemo. Through the Ruby-Rose Rainbow Fund we’ve so far raised about $38,000 dollars. “Ruby’s Ride ‘n’ Roll is a fundraiser we are holding for kids with cancer. We’ve teamed up with the Children's Cancer Foundation, and whatever we raise they hold in trust, and will be distributed in consultation with us. If a clinical trial comes up for AML along the lines of immunotherapy, we will support that. Last year we had 70 people and between 30 to 40 cars and motorbikes come through.” The ride follows the coast from Mt Martha to Sorrento, then goes through Flinders to a barbecue lunch at Main Ridge. The it’s Red Hill to Hastings, Mornington and back for an auction at the Dava Hotel, Mt Martha. Details: rubyroserainbowfund.com.au. Registration for Ruby’s Ride ‘n’ Roll is $30 and opens from 9am on Saturday 14 April at the Dava Hotel, Mt Martha. Brodie Cowburn

Ride for research: Ruby’s Ride n Roll across the peninsula is named by Shane McGuinness and Rachael Ford after their daughter Ruby-Rose, who passed away in 2015. Picture: Cameron McCullough