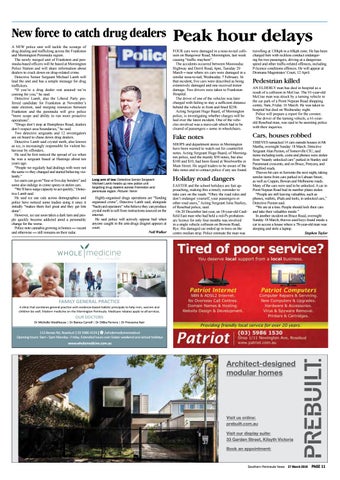 New force to catch drug dealers A NEW police unit will tackle the scourge of drug dealing and trafficking across the Frankston and Mornington Peninsula region. The newly merged unit of Frankston and peninsula-based officers will be based at Mornington Police Station and will share information about dealers to crack down on drug-related crime. Detective Senior Sergeant Michael Lamb will lead the unit and has a simple message for drug traffickers. “If you’re a drug dealer rest assured we’re coming for you,” he said. Detective Lamb, also the Liberal Party preferred candidate for Frankston at November’s state election, said merging resources between Frankston and the peninsula will give police “more scope and ability to run more proactive operations”. “Drugs don’t stop at Humphries Road, dealers don’t respect area boundaries,” he said. Two detective sergeants and 12 investigators are on board to chase down drug dealers. Detective Lamb said crystal meth, also known as ice, is increasingly responsible for violent behaviour by offenders. He said he first noticed the spread of ice when he was a sergeant based at Hastings about ten years ago. “People we regularly had dealings with were not the same — they changed and started behaving violently.” Ice users can go on “four or five-day benders” and some also indulge in crime sprees in stolen cars. “We’ll have surge capacity to act quickly,” Detective Lamb said. He said ice use cuts across demographics and police have noticed some tradies using it since it initially “makes them feel great and they get lots done”. However, ice use soon takes a dark turn and people quickly become addicted amid a personality change for the worse. Police note cannabis growing in homes — vacant and otherwise — still remains on their radar.

Peak hour delays FOUR cars were damaged in a nose-to-tail collision on Bungower Road, Mornington, last week causing “traffic mayhem”. The accidents occurred between Moorooduc Highway and Derril Road, 4pm, Tuesday 20 March – near where six cars were damaged in a similar nose-to-tail, Wednesday 7 February. In that incident, five cars were described as being extensively damaged and one received minor damage. Two drivers were taken to Frankston Hospital. The driver of one of the vehicles was later charged with failing to stay a sufficient distance behind the vehicle in front and fined $238. Acting Sergeant Hugo Baard, of Mornington police, is investigating whether charges will be laid over the latest incident. One of the vehicles involved was a maxi-cab which had to be cleared of passengers – some in wheelchairs.

travelling at 130kph in a 60kph zone. He has been charged him with reckless conduct endangering his two passengers, driving at a dangerous speed and other traffic-related offences, including P-licence conditions offences. He will appear at Dromana Magistrates’ Court, 12 April.

SHOPS and department stores in Mornington have been warned to watch out for counterfeit notes. Acting Sergeant Hugo Baard, of Mornington police, said the mainly $50 notes, but also $100 and $10, had been found at Woolworths in Main Street. He urged traders to be aware of the fake notes and to contact police if any are found. Long arm of law: Detective Senior Sergeant Michael Lamb heads up new police unit targeting drug dealers across Frankston and peninsula region. Picture: Yanni

Highly-organised drugs operations are “funding organised crime”, Detective Lamb said, alongside “backyard operators” who believe they can produce crystal meth to sell from instructions sourced on the internet. He said police will actively oppose bail when anyone caught in the anti-drugs dragnet appears at court. Neil Walker

Holiday road dangers EASTER and the school holidays are fast approaching, making this a timely reminder to take care on the roads. “Obey the road rules and don’t endanger yourself, your passengers or other road users,” Acting Sergeant Julia Starkey, of Rosebud police, said. On 20 December last year, an 18-year-old Caulfield East man who had held a red-Ps probationary licence for only four months was involved in a single vehicle collision on Browns Road, Rye. His damaged car ended up in trees on the centre median strip. Police estimate the man was

Pedestrian killed AN ELDERLY man has died in hospital as a result of a collision in McCrae. The 91-year-old McCrae man was struck by a turning vehicle in the car park of a Point Nepean Road shopping centre, 9am, Friday 16 March. He was taken to hospital but died on Wednesday night. Police will prepare a report for the coroner. The driver of the turning vehicle, a 61-yearold Rosebud man, was said to be assisting police with their inquiries.

THIEVES ransacked 14 cars outside houses in Mt Martha, overnight Sunday 18 March. Detective Sergeant Alan Paxton, of Somerville CIU, said items including tools, coins and phones were stolen from “mainly unlocked cars” parked in Stanley and Paramount crescents, and on Bruce, Ponyara, and Bradford roads. Thieves hit cars in Sorrento the next night, taking similar items from cars parked in Labuan Street, as well as Coppin, Bowan and Melbourne roads. Many of the cars were said to be unlocked. A car in Point Nepean Road had its number plates stolen. “People are still leaving valuables, such as phones, wallets, iPads and tools, in unlocked cars,” Detective Paxton said. “We are at a loss. People should lock their cars and take their valuables inside.” In another incident on Bruce Road, overnight Sunday 18 March, thieves used keys found inside a car to access a house where a 78-year-old man was sleeping and stole a laptop. Stephen Taylor

FAMILY GENERAL PRACTICE A clinic that combines general practice with evidence-based holistic principals to help men, women and children be well. Modern medicine on the Mornington Peninsula. Medicare rebates apply to all services.