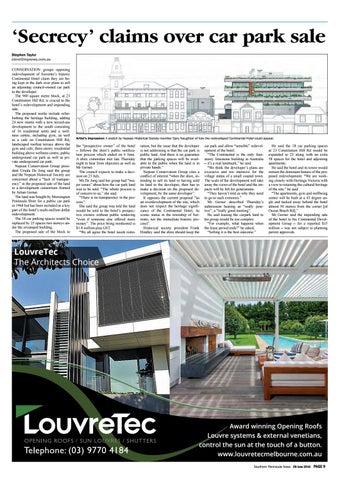 ‘Secrecy’ claims over car park sale Stephen Taylor steve@mpnews.com.au CONSERVATION groups opposing redevelopment of Sorrento’s historic Continental Hotel claim they are being kept in the dark over plans to sell an adjoining council-owned car park to the developer. The 900 square metre block, at 23 Constitution Hill Rd, is crucial to the hotel’s redevelopment and impending sale. The proposed works include refurbishing the heritage building, adding 24 new rooms with a new mixed-use development to the south consisting of 16 residential units and a wellness centre, including gym, as well as a cafe on Constitution Hill Rd, landscaped rooftop terrace above the gym and cafe, three-storey residential building above wellness centre, public underground car park as well as private underground car park. Nepean Conservation Group president Ursula De Jong said the group and the Nepean Historical Society are concerned about a “lack of transparency” in the proposed sale of the land to a development consortium fronted by Julian Gerner. The land was bought by Mornington Peninsula Shire for a public car park in 1968 but has been included as a key part of the hotel’s multi-million dollar redevelopment. The 18 car parking spaces would be replaced by 25 spaces two storeys under the revamped building. The proposed sale of the block to

Artist’s impression: A sketch by Nepean Historical Society member Gary Naughton of how the redeveloped Continental Hotel could appear.

the “prospective owner” of the hotel – follows the shire’s public notification process which ended on 6 June. A shire committee met last Thursday night to hear from objectors as well as Mr Gerner. The council expects to make a decision on 25 July. Ms De Jong said her group had “major issues” about how the car park land was to be sold. “The whole process is of concern to us,” she said. “There is no transparency in the process.” She said the group was told the land would be sold to the hotel’s prospective owners without public tendering “even if someone else offered more money”. The price being mentioned is $1.8 million plus GST. “We all agree the hotel needs resto-

ration, but the issue that the developer is not addressing is that the car park is public land. And there is no guarantee that the parking spaces will be available to the public when the land is in private hands.” Nepean Conservation Group cites a conflict of interest “when the shire, intending to sell its land or having sold its land to the developer, then has to make a decision on the proposed development, by the same developer”. It opposes the current proposal “as an overdevelopment of the site, which does not respect the heritage significance of the Continental Hotel, its iconic status in the township of Sorrento, nor the immediate historic precinct”. Historical society president Frank Hindley said the shire should keep the

car park and allow “sensible” redevelopment of the hotel. “The Continental is the only fourstorey limestone building in Australia – it’s a real landmark,” he said. “We think the developer’s plans are excessive and too intensive for the village status of a small coastal town. The scale of the development will take away the views of the hotel and the impacts will be felt for generations. “They haven’t told us why they need to go to such extremes.” Mr Gerner described Thursday’s submission hearing as “really positive”, a “really good meeting”. He said leasing the carpark land to his group would be too complex. “For example, what happens when the lease period ends?” he asked. “Selling it is the best outcome.”

He said the 18 car parking spaces at 23 Constitution Hill Rd would be expanded to 25 along with an extra 58 spaces for the hotel and adjoining apartments. He said the hotel and its tower would remain the dominant feature of the proposed redevelopment. “We are working closely with Heritage Victoria with a view to retaining the cultural heritage of the site,” he said. “The apartments, gym and wellbeing centre will be built at a 45 degree angle and tucked away behind the hotel almost 50 metres from the corner [of Ocean Beach Rd].” Mr Gerner said the impending sale of the hotel to his Continental Development Group – for a reported $15 million – was not subject to planning permit approvals.