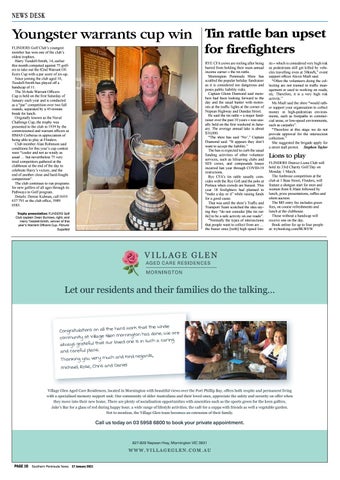 FLINDERS Golf Club’s youngest member has won one of the club’s oldest trophies. Harry Tiesdell-Smith, 14, earlier this month competed against 75 golfers to take out the 82nd Warrant Officers Cup with a par score of six-up. Since joining the club aged 10, Tiesdell-Smith has played off a handicap of 11. The 36-hole Warrant Officers Cup is held on the first Saturday of January each year and is conducted as a “par” competition over two full rounds, separated by a 45-minute break for lunch. Originally known as the Naval Challenge Cup, the trophy was presented to the club in 1939 by the commissioned and warrant officers at HMAS Cerberus in appreciation of being able to play at Flinders. Club member Alan Robinson said conditions for this year’s cup contest were “cooler and not as windy as usual … but nevertheless 75 very tired competitors gathered at the clubhouse at the end of the day to celebrate Harry’s victory, and the end of another close and hard-fought competition”. The club continues to run programs for new golfers of all ages through its Pathways to Golf program. Details: Denise Kidman, call 0410 637 791 or the club office, 5989 0583.

RYE CFA crews are reeling after being barred from holding their main annual income earner – the tin rattle. Mornington Peninsula Shire has scuttled the popular holiday fundraiser as it is considered too dangerous and poses public liability risks. Captain Glenn Diamond said members had been looking forward to the day and the usual banter with motorists at the traffic lights at the corner of Nepean Highway and Dundas Street. He said the tin rattle – a major fundraiser over the past 10 years – was usually held on the first weekend in January. The average annual take is about $10,000. “The shire has said ‘No’,” Captain Diamond said. “It appears they don’t want to accept the liability.” The ban is expected to curb the usual funding activities of other volunteer services, such as lifesaving clubs and SES crews, and compounds losses incurred last year through COVID-19 restrictions. Rye CFA’s tin rattle usually coincides with the Rye Gift and the polo at Portsea when crowds are busiest. This year 18 firefighters had planned to “make a day or it” while raising funds for a good cause. That was until the shire’s Traffic and Transport Team scotched the idea saying they “do not consider [the tin rattle] to be a safe activity on our roads”. “Normally the types of intersections that people want to collect from are … the busier ones [with] high speed lim-

its – which is considered very high risk as pedestrians still get killed by vehicles travelling even at 50km/h,” event support officer Alexis Miall said. “Often the volunteers doing the collecting are not trained in traffic management or used to working on roads, etc. Therefore, it is a very high risk activity.” Ms Miall said the shire “would rather support your organisation to collect money in high-pedestrian environments, such as footpaths in commercial areas, or low-speed environments, such as carparks”. “Therefore at this stage we do not provide approval for the intersection collection.” She suggested the brigade apply for a street stall permit. Stephen Taylor

Lions to play FLINDERS District Lions Club will hold its 33rd Charity Golf Day on Monday 1 March. The Ambrose competition at the club at 1 Bass Street, Flinders, will feature a shotgun start for men and women from 8.30am followed by lunch, prize presentations, raffles and silent auction. The $85 entry fee includes green fees, on course refreshments and lunch at the clubhouse. Those without a handicap will receive one on the day. Book online for up to four people at: trybooking.com/BLWEW

Let our residents and their families do the talking…

rk that the whole Congratulations on all the hard wo ngton has done. We are community at Village Glen Morni e is in such a caring always grateful that our loved on and careful place. d regards, Thanking you very much and kin Michael, Rose, Chris and Daniel

Village Glen Aged Care Residences, located in Mornington with beautiful views over the Port Phillip Bay, oﬀers both respite and permanent living with a specialised memory support unit. Our community of older Australians and their loved ones, appreciate the safety and security on oﬀer when they move into their new home. There are plenty of socialisation opportunities with amenities such as the sports green for the keen golfers, Jake’s Bar for a glass of red during happy hour, a wide range of lifestyle activities, the café for a cuppa with friends as well a vegetable garden. Not to mention, the Village Glen team becomes an extension of their family.