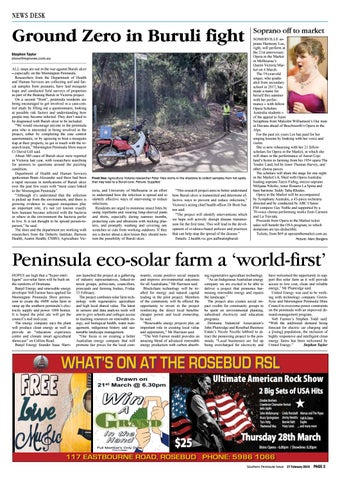 Soprano off to market

Stephen Taylor steve@mpnews.com.au ALL stops are out in the war against Buruli ulcer – especially on the Mornington Peninsula. Researchers from the Department of Health and Human Services are collecting soil and faecal samples from possums, have laid mosquito traps and conducted field surveys of properties as part of the Beating Buruli in Victoria project. On a second “front”, peninsula residents are being encouraged to get involved in a case-control study by filling out a questionnaire, looking at possible risk factors and understanding how people may become infected. They don’t need to be diagnosed with Buruli ulcer to be included. “We would encourage anyone in the peninsula area who is interested in being involved in the project, either by completing the case control questionnaire, or by agreeing to host a mosquito trap at their property, to get in touch with the research team,” Mornington Peninsula Shire mayor Cr David Gill said. About 380 cases of Buruli ulcer were reported in Victoria last year, with researchers searching for answers to questions around the puzzling condition. Department of Health and Human Services spokesman Bram Alexander said there had been a rapid increase in notifications of Buruli ulcer over the past few years with “most cases linked to the Mornington Peninsula”. “Although it’s understood that the infection is picked up from the environment, and there is growing evidence to suggest mosquitoes play an important role, it&#39;s not yet known exactly how humans become infected with the bacteria or where in the environment the bacteria prefer to live. It is not thought to be spread person-toperson,” he said. The shire and the department are working with researchers from the Doherty Institute, Barwon Health, Austin Health, CSIRO, Agriculture Vic-

Front line: Agriculture Victoria researcher Peter Mee works in the shadows to collect samples from hot spots that may lead to a Buruli cure. Picture: Supplied

toria, and University of Melbourne in an effort to understand how the infection is spread and to identify effective ways of intervening to reduce infections. Residents are urged to minimise insect bites by using repellents and wearing long-sleeved pants and shirts, especially during summer months, protecting cuts and abrasions with sticking plasters, and promptly washing and covering any scratches or cuts from working outdoors. If they see a doctor about a skin lesion they should mention the possibility of Buruli ulcer.

“This research project aims to better understand how Buruli ulcer is transmitted and determine effective ways to prevent and reduce infections,” Victoria’s acting chief health officer Dr Brett Sutton said. “The project will identify interventions which we hope will actively disrupt disease transmission for the first time. This will lead to the development of evidence-based policies and practices that can help stop the spread of the disease.” Details: 2.health.vic.gov.au/beatingburuli

SOMERVILLE soprano Harmony Lee, right, will perform at the 21st anniversary Opera in the Market in Melbourne’s Queen Victoria Market on 4 March. The 19-year-old singer, who graduated from secondary school in 2017, has made a name for herself this summer with her performance – with fellow Opera Scholars Australia students – of the appeal to Saint Seraphina from Malcolm Williamson’s Our man in Havana ahead of Beechworth’s Opera in the Alps. For the past six years Lee has paid for her singing lessons by busking with her voice and violin. She is now rehearsing with her 21 fellow scholars for Opera in the Market, in which she will share in the performance of Aaron Copland’s hymn to farming from his 1954 opera The Tender Land, led by tenor Thomas Harvey, and other chorus pieces. The scholars will share the stage for one night in the Market’s K Shed with Opera Australia leading soprano Taryn Fiebig, mezzo soprano Milijana Nikolic, tenor Rosario La Spina and bass baritone Teddy Tahu Rhodes. Opera in the Market will be accompanied by Symphony Australis, a 45-piece orchestra directed and by conducted by ABC Classic FM compere Guy Noble and supported by a 70-voice chorus performing works from Carmen and La Traviata. Proceeds from Opera in the Market ticket sales will benefit the OSA program, to which donations are tax-deductible. Tickets, from $69 at operainthemarket.com.au Picture: Marc Bongers

Peninsula eco-solar farm a ‘world-first’ HOPES are high that a “hyper-intelligent” eco-solar farm will be built on the outskirts of Dromana. Bunjil Energy and renewable energy developer Volt Farmer have applied for Mornington Peninsula Shire permission to create the 4MW solar farm to ramp up the southern peninsula’s electricity supply and power 1000 homes. It is hoped the pilot site will get the council’s nod mid-year. The energy company says the plant will produce clean energy as well as provide an “education experience centre and climate smart agricultural showcase” on Collins Road. Bunjil Energy founder Isaac Harri-

son launched the project at a gathering of industry representatives, linked-interest groups, politicians, councillors, principals and farming bodies, Friday 15 February. The project combines solar farm technology with regenerative agriculture and high local shared value. The latest in sensors and data analysis tools will aim to give schools and colleges access to teaching resources on renewable energy, soil biological health, water management, indigenous history and sustainable landscape management. “Our focus is on creating a better Australian energy company that will promote fair prices for the local com-

munity, create positive social impacts and improve environmental outcomes for all Australians,” Mr Harrison said. Blockchain technology will be trialled for energy and natural capital trading in the pilot project. Members of the community will be offered the opportunity to invest in the project reinforcing the direct local benefits: cheaper power and local ownership, he said. “Renewable energy projects play an important role in creating local value and opportunity,” Mr Harrison said. “The Volt Farmer model provides an amazing blend of advanced renewable energy production with carbon absorb-

ing regenerative agriculture technology. “As an Indigenous Australian energy company we are excited to be able to deliver a project that promotes harnessing renewable energy and repairs the landscape.” The project also creates social impact credits for community groups to be spent on environmental planting, subsidised electricity and education programs. Dromana Industrial Association’s John Plumridge and Rosebud Business Estate’s Nicole Nicolle lobbied to attract the pioneering project to the peninsula. “Local businesses are fed up being overcharged for electricity and

have welcomed the opportunity to support this solar farm as it will provide access to low cost, clean and reliable energy,” Mr Plumridge said. United Energy was said to be working with technology company GreenSync and Mornington Peninsula Shire Council to overcome power constraints on the peninsula with an improved demand-management program. Volt Farmer’s Stephen Todd said: “With the additional demand being forecast for electric car charging and a [rising] population, the inclusion of highly responsive and intelligent clean energy farms has been welcomed by United Energy.” Stephen Taylor