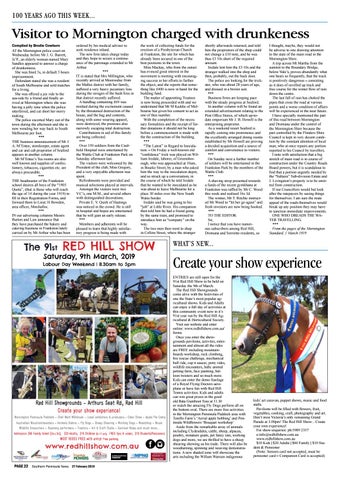 Visitor to Mornington charged with drunkeness Compiled by Brodie Cowburn AT the Mornington police court on Wednesday before Mr J. G. Barrett, Js’P., an elderly woman named Mary Sandles appeared to answer a charge of drunkenness. She was fined 5s, in default 5 hours imprisonment. Defendant stated she was a resident of South Melbourne and sold matches for a living. She was offered a joy ride to the sea-side by a friend and finally arrived at Mornington where she was having a jolly time when the police interferred, and cut short her merry making. The police escorted Mary out of the town during the afternoon and she is now wending her way back to South Melbourne per foot. *** THE business announcement of Mr J. A. M’Entee, storekeeper, estate agent and car and cab proprietor of Seaford appears in another column. Mr M’Entee’s Tea rooms are also well known and supplies of confectionery, tobaccos, cigarettes etc. are always procurable. *** THE headmaster of the Frankston school desires all boys of the “1905 Quota”, (that is those who will reach the age of 14 during the year 1919) to fill in their Registration Forms, and forward them to Lieut. H Bowden, area officer, Mordialloc. *** IN our advertsing columns Messrs Burton and Law announce that they have purchased the bakery and catering business in Frankston lately carried on by Mr Arthur who has been

ordered by his medical adviser to seek residence inland. The new firm takes charge today and they hope to secure a continuance of the patronage extended to Mr Arthur. *** IT is stated that Mrs Millington, who recently arrived at Moorooduc from the Mallee district with her family, suffered a very heavy pecuniary loss during the ravages of the bush fires in that district recently suffered. A handbag containing £69 was mislaid during the excitement caused by the threatened destruction of the house, and the bag and contents, along with some wearing apparel, were destroyed, the premises also narrowly escaping total destruction. Contributions in aid of this family are being collected. *** Over 150 soldiers from the Caulfield Hospital were entertained by the Wattle Club at Frankston Park on Saturday afternoon last. The visitors were welcomed by the President of the club, Miss Gregory, and a very enjoyable afternoon was spent. Refreshments were provided and musical selections played at intervals. Amongst the visitors were two V.C’s, one M.M., and several others with distinguished decorations. Private E. V. Quirk of Hastings was noticed in the crowd. He is still in hospital and hopes are entertained that he will gain an early release. *** Members and adherents will be pleased to learn that highly satisfactory progress is being made with

the work of collecting funds for the erection of a Presbyterian Church at Frankston, the site for which has already been secured in one of the best positions in the town. Miss Mackay, who from the outset has evinced great interest in the movement is meeting with encouraging success in her efforts to further the object, and she reports that something like £400 is now in hand for the building fund. The matter of appointing Trustees is now being proceeded with and we understand that Mr M Keddie of Melbourne has given his consent to act as one of thee number. With the completion of the necessary formalities and the receipt of further donations it should not be long before a commencement is made with the the construction of the building. *** “The Latest” in Regard to Inoculation. – On Friday a well-known old “confidence” trick was played on William Iredale, laborer, of Greensborough, who was apporached at 10am, in Bourke Street, by a man who asked him the way to the inoculation depot, and so struck up a conversation, in the course of which he told Iredale that he wanted to be inoculated as he was about to leave Melbourne for a place 30 miles over the New South Wales border. Iredale said he was going to his “job” at Little River. His companion then told him he had a friend going by the same train, and promised to introduce him as “company” on the way. The two men then went to shop in Collins Street, where the stranger

shortly afterwards returned, and told him the proprietors of the shop could not change a £10 note, and he was thus £3 10s short of the required amount. Iredale lent him the £3 10s and the stranger walked into the shop and then, probably, out the back door. The police are looking for the trickster, who was about 28 years of age, and dressed in a brown suit. *** Business firms are keeping pace with the steady progress at Seaford. In another column will be found an extended advertisement relating to the Post Office Stores, of which up-todate emporium Mr J. B. Howell is the enterprising proprietor. As a weekend resort Seaford is rapidly coming into prominence and the excellently arranged dining rooms established by Mr Howell are proving a decided acquisition and a source of comfort and convenience to visitors. *** On Sunday next a further number of soldiers will be entertained in the Frankston Park by the members of the Wattle Club. *** A shaving strop presented towards a funds of the recent gymkhana at Frankston was raffled by Mr C. Wood this week and realised 16s 3d. The winner, Mr T. Ritchie instructed Mr Wood to “let her go again” and fresh investors are now being booked. *** TO THE EDITOR. Sir, I notice that you have numerous subscribers among Red Hill, Dromana and Sorrento residents, so

I thought, maybe, they would not be adverse to one drawing attention to the state of the main road in the Mornington Shire. A trip across Mt Martha from the summit to the Boundary Bridge, below Vale’s, proves abundantly what one hears so frequently, that the track is positively dangerous – consisting as it does of ravelled up track and free course for the winter flow of rain down the centre. The last fall of rain has choked the pipes that cross the road at various points and a worse condition of affairs will be experienced in the near future. I have specially mentioned the part of this road between Mornington and Dromana under the control of the Mornington Shire because the part controlled by the Flinders Shire Council is kept in very decent condition by the constant attention of local man, who at once repairs any portion reported to his Council by travellers. I note with satisfaction that a big stretch of main road is in course of construction under the Country Roads Board powers, but it is scandalous to find that a portion urgently needed by the “Saltaire” Sub-division Estate and J. Livingston’s property is to be omitted from construction. If our Councillors would but look after the ratepayers by seeing things for themselves. I am sure the mute appeal of the roads themselves would break up any position they may have to sanction immediate improvements. ONE WHO DREADS THE WATER TRAVELLING. *** From the pages of the Mornington Standard, 1 March 1919

Create your show experience ENTRIES are still open for the 91st Red Hill Show to be held on Saturday the 9th of March. The Red Hill Showgrounds come alive with the festivities of one the State’s most popular agricultural shows. Kids and Adults can enjoy a full day of activities at this community event now in it’s 91st year run by the Red Hill Agricultural &amp; Horticultural Society. Visit our website and enter online: www.redhillshow.com.au/ forms Once you enter the showgrounds pavilions, activites, entertainment and almost all the rides are FREE including mountainboards workshop, rock climbing, fire rescue challenge, mechanical bull ride, cup n saucer, pony rides, wildlife encounters, baby animal petting farm, face painting, balloon twisters and so much more. Kids can enter the demo fuselage of a Royal Flying Doctors aeroplane or have fun with Red Hill Tennis activities. Kids and adults can win great prizes in the good old Bata Gumboot Toss at 11.30 or watch the amazing Fly Dogs perform all on the bottom oval. There are more free activities in the Mornington Peninsula Paddock area with Torello Farm’s ‘Aerial apple bobbing’ and Peninsula Wildflowers ‘Bouquet workshop’ Aside from the remarkable array of animals including Clydesdales, cattle, sheep, alpacas, poultry, minature goats, pet fancy rats, working dogs and more, we are thrilled to have a sheep shearing showing us his trade. There will also be woodturning, spinning and weaving demonstrations. A new shaded zone will showcase the arts including the Willum Warrain indigenous