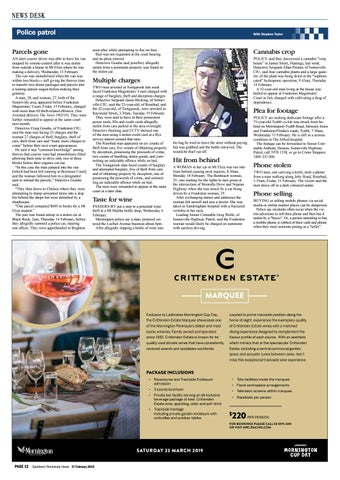 NEWS DESK Police patrol Parcels gone AN alert courier driver was able to have his van stopped by remote-control after it was stolen from outside a house in Mt Eliza where he was making a delivery, Wednesday 13 February. The van was immobilised when the van was within two blocks – still giving the thieves time to transfer two dozen packages and parcels into a waiting station wagon before making their getaway. A man, 28, and woman, 27, both of the Somerville area, appeared before Frankston Magistrates’ Court, Friday 15 February, charged with more than 60 theft-related offences. (See Arrested delivery The News 19/2/19). They were further remanded to appear at the same court next month. Detective Craig Goudie, of Frankston CIU, said the man was facing 35 charges and the woman 27 charges of theft, burglary, theft of cars, theft from cars and “many more charges to come” before their next court appearances. He said it was “common knowledge” among thieves that courier vans had immobilisers fitted allowing them time to drive only two or three blocks before their engines cut out. “In this case the man jumped into the van [which had been left running in Boxmoor Court] and the woman followed him to a designated spot to unload the parcels,” Detective Goudie said. “They then drove to Chelsea where they were attempting to dump unwanted items into a skip bin behind the shops but were disturbed by a shopkeeper. “One parcel contained $600 in books for a Mt Eliza student.” The pair was found asleep in a stolen car at Black Rock, 2am, Thursday 14 February, before they allegedly rammed a police car, injuring one officer. They were apprehended in Brighton

soon after while attempting to flee on foot. Bail was not requested at the court hearing and no pleas entered. Detective Goudie said jewellery allegedly stolen from a peninsula property was found in the stolen car.

Cannabis crop POLICE said they discovered a cannabis “crop house” in James Street, Hastings, last week. Detective Sergeant Allan Paxton, of Somerville CIU, said four cannabis plants and a large quantity of the plant was being dried in the “sophisticated” hydroponic operation, 9.45am, Thursday 14 February. A 32-year-old man living at the house was bailed to appear at Frankston Magistrates’ Court in July charged with cultivating a drug of dependence.

Multiple charges TWO men arrested at Tootgarook last week faced Frankston Magistrates’ Court charged with a range of burglary, theft and deception charges. Detective Sergeant Jason Hocking, of Somerville CIU, said the 22-year-old, of Rosebud, and the 42-year-old, of Tootgarook, were arrested in Raymond Street, 3.30am, Tuesday 19 February. They were said to have in their possession power tools, IDs and credit cards allegedly stolen from cars parked in the area overnight. Detective Hocking said CCTV showed one of the men using a stolen credit card at a Rye service station around that time. The Rosebud man appeared on six counts of theft from cars, five counts of obtaining property by deception, possessing the proceeds of crime, two counts of handling stolen goods, and committing an indictable offence while on bail. The Tootgarook man faced counts of burglary and attempted burglary, five of theft from cars and of obtaining property by deception, one of possessing the proceeds of crime, and committing an indictable offence while on bail. The men were remanded to appear at the same court at a later date.

Taste for wine PASSERS-BY put a stop to a potential wine theft at a Mt Martha bottle shop, Wednesday 6 February. Mornington police say a man, pictured, entered the Lochiel Avenue business about 4pm. After allegedly slipping a bottle of wine into

his bag he tried to leave the store without paying but was grabbed and the bottle retrieved. The would-be thief ran off.

Hit from behind A WOMAN in her car in Mt Eliza was run into from behind causing neck injuries, 8.30am, Monday 18 February. The Bonbeach woman, 25, was waiting for the lights to turn green at the intersection of Wooralla Drive and Nepean Highway when she was struck by a car being driven by a Frankston woman, 29. After exchanging names and addresses the woman felt unwell and saw a doctor. She was taken to Sandringham hospital with a fractured vertebra in her neck. Leading Senior Constable Greg Wolfe, of Somerville Highway Patrol, said the Frankston woman would likely be charged on summons with careless driving.

POLICE are seeking dash-cam footage after a 71-year-old Tyabb cyclist was struck from behind on Mornington-Tyabb Road, between Jones and Frankston-Flinders roads, Tyabb, 7.30am, Wednesday 13 February. He is still in a serious condition in The Alfred hospital. The footage can be forwarded to Senior Constable Anthony Deason, Somerville Highway Patrol, call 5978 1358, or go to Crime Stoppers 1800 333 000.

Phone stolen TWO men, one carrying a knife, stole a phone from a man walking along Jetty Road, Rosebud, 3.55am, Friday 15 February. The victim said the men drove off in a dark coloured sedan.

Phone selling BUYING or selling mobile phones via social media or online market places can be dangerous. Police say incidents often occur when the victim advertises to sell their phone and then has it stolen by a “buyer”. Or, a person intending to buy a mobile phone is robbed of their cash and phone when they meet someone posing as a “seller”.

Located in prime trackside position along the

the Crittenden Estate Marquee showcases one

of the Mornington Peninsula’s oldest and most

of Crittenden Estate wines with a matched

dining experience designed to complement the

since 1982, Crittenden Estate is known for its

flavour profile of each course. With an aesthetic

which mimics that of the spectacular Crittenden

• Tote facilities inside the marquee