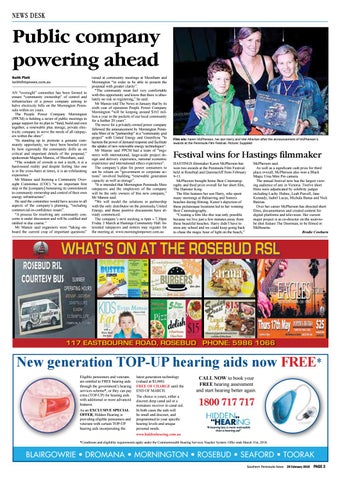 Public company powering ahead Keith Platt keith@mpnews.com.au AN “oversight” committee has been formed to ensure “community ownership” of control and infrastructure of a power company aiming to halve electricity bills on the Mornington Peninsula within six years. The People Power Company Mornington (PPCM) is holding a series of public meetings to gauge support for its plan to “fund, build and own together, a renewable plus storage, private electricity company to serve the needs of all ratepayers within the shire”. “In standing up to promote a genuine community opportunity, we have been bowled over by how rigorously the community drills us on critical and important details of the proposal,” spokesman Magnus Mansie, of Shoreham, said. “The wisdom of crowds is not a myth, it is a hard-nosed reality and despite feeling like one is in the cross-hairs at times, it is an exhilarating experience.” Mr Mansie said forming a Community Oversight Committee (COC) “is an important first step in the [company] honouring its commitment to community ownership and control of their own energy infrastructure”. He said the committee would have access to all aspects of the company’s planning, “including commercial-in-confidence issues”. “A process for resolving any community concerns is under discussion and will be codified and ratified in due course.” Mr Mansie said organisers were “taking onboard the current crop of important questions”

raised at community meetings at Shoreham and Mornington “in order to be able to present the proposal with greater clarity”. “The community must feel very comfortable with this opportunity and know that there is absolutely no risk in registering,” he said. Mr Mansie told The News in January that by its sixth year of operation People Power Company Mornington “will be keeping around $165 million a year in the pockets of our local community for a further 20 years”. The move for a privately-owned power company followed the announcement by Mornington Peninsula Shire of its “partnership” in a “community grid project” with United Energy and GreenSync “to harness the power of demand response and facilitate the uptake of new renewable energy technologies”. Mr Mansie said PPCM had a team of “engineers with international, large-scale project design and delivery experience, national economic experience and international ethics experience”. The company’s plan for power consumers to not be reliant on “government or corporate actions” involved building “renewable generation capacity as well as storage”. “It is intended that Mornington Peninsula Shire ratepayers and the employees of the company will be the only owners of this new company,” Mr Mansie said. “We will model the solutions in partnership with the only distributor on the peninsula, United Energy, and those positive discussions have already commenced. The company’s next meeting is 6pm – 7.30pm Friday 2 March at Hastings Community Hall. Interested ratepayers and renters may register for the meeting at: www.morningtonpower.com.au

Film win: Karen McPherson, her son Harry and Mel Atherton after the announcement of McPherson’s awards at the Peninsula Film Festival. Picture: Supplied

Festival wins for Hastings filmmaker McPherson said. As well as a significant cash prize for third place overall, McPherson also won a Black Magic Ursa Mini Pro camera. The annual festival now has the largest viewing audience of any in Victoria. Twelve short films were adjudicated by celebrity judges including Lachy Hulme, Leah Purcell, Jane Kennedy, Isabel Lucas, Michala Banas and Nick Batzias. Over her career McPherson has directed short films, documentaries and created content for digital platforms and television. Her current major project is as co-director on the soon-tobe shot feature The Doorman, to be filmed in Melbourne. Brodie Cowburn

HASTINGS filmmaker Karen McPherson has won two awards at the Peninsula Film Festival held in Rosebud and Queenscliff from February 9-11. McPherson brought home Best Cinematography and third prize overall for her short film, The Hamster King. The film features her son Harry, who spent many mornings at Balnarring and Somers beaches during filming. Karen’s depiction of these picturesque locations led to her winning Best Cinematography. “Creating a film like this was only possible because we live just a few minutes away from these beautiful beaches. Harry didn’t have to miss any school and we could keep going back to chase the magic hour of light on the beach,”

latest generation technology (valued at $3,000) FREE OF CHARGE until the END OF MARCH.