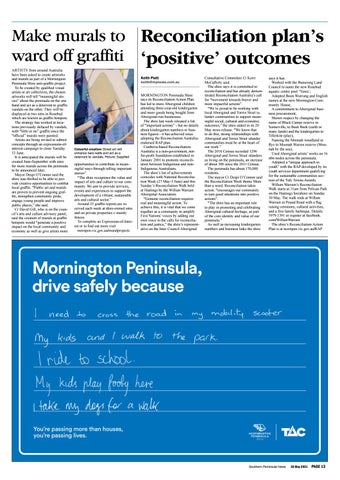 ARTISTS from around Australia have been asked to create artworks and murals as part of a Mornington Peninsula Shire anti-graffiti project. To be created by qualified visual artists or art collectives, the chosen artworks will tell “meaningful stories” about the peninsula on the one hand and act as a deterrent to graffiti vandals on the other. They will be displayed at two sites in Rosebud which are known as graffiti hotspots. The strategy has worked at locations previously defaced by vandals, with “little or no” graffiti since the “official” murals were painted. Artists are being invited to submit concepts through an expressions-ofinterest campaign to close Tuesday 15 June. It is anticipated the murals will be created June-September with sites for more murals across the peninsula to be announced later. Mayor Despi O’Connor said the shire was thrilled to be able to provide creative opportunities to combat local graffiti. “Public art and murals are proven to prevent ongoing graffiti, strengthen community pride, engage young people and improve public places,” she said. Cr David Gill, who is on the council’s arts and culture advisory panel, said the creation of murals at graffiti hotspots would “generate a positive impact on the local community and economy as well as give artists more

opportunities to contribute in meaningful ways through telling important stories”. “The shire recognises the value and impact of arts and culture to our community. We aim to provide services, events and experiences to support the development of a vibrant, sustainable arts and cultural sector.” Around 25 graffiti reports are received each week at shire-owned sites and on private properties – mainly fences. To complete an Expression-of-Interest or to find out more visit mornpen.vic.gov.au/muralprojects

MORNINGTON Peninsula Shire says its Reconciliation Action Plan has led to more Aboriginal children attending three-year-old kindergarten and more goods being bought from Aboriginal-run businesses. The shire last week released a list of “important actions” - but no details about kindergarten numbers or business figures - it has achieved since adopting the Reconciliation Australiaendorsed RAP plan. Canberra-based Reconciliation Australia is a non-government, notfor-profit foundation established in January 2001 to promote reconciliation between Indigenous and nonIndigenous Australians. The shire’s list of achievements coincides with National Reconciliation Week (27 May-3 June) and this Sunday’s Reconciliation Walk held at Hastings by the Willum Warrain Aboriginal Association. “Genuine reconciliation requires real and meaningful action. To achieve this, it is vital that we come together as a community to amplify First Nations’ voices by adding our own voice to the calls for reconciliation and justice,” the shire’s representative on the Inter Council Aboriginal

Consultative Committee Cr Kerri McCafferty said. The shire says it is committed to reconciliation and has already demonstrated Reconciliation Australia’s call for “movement towards braver and more impactful actions”. “We’re proud to be working with local Aboriginal and Torres Strait islander communities to support meaningful social, cultural and economic outcomes,” the shire stated in its 20 May news release. “We know that to do this, strong relationships with Aboriginal and Torres Strait islander communities must be at the heart of our work.” The 2016 Census recorded 1296 Aboriginal and Torres Strait islanders as living on the peninsula, an increase of about 300 since the 2011 Census. The peninsula has about 170,000 residents. The mayor Cr Despi O’Connor said the Reconciliation Week theme More than a word. Reconciliation takes action. “encourages our community to turn good intentions into positive actions”. “The shire has an important role to play in promoting and celebrating Aboriginal cultural heritage, as part of the core identity and value of our peninsula.” As well as increasing kindergarten numbers and business links the shire

says it has: Worked with the Bunurong Land Council to name the new Rosebud aquatic centre pool ‘Yawa’; Adopted Boon Wurrung and English names at the new Mornington Community House; A commitment to Aboriginal business procurement; Shown respect by changing the name of Black Camps reserve in Somerville, to Beek Beek (earth or many lands) and the kindergarten to Tillerkite (play); Naming the Moonah woodland in Rye to Moonah Warren reserve (Moonah by the sea); Used Aboriginal artists’ works on 16 nbn nodes across the peninsula. Adopted a “unique approach to youth” with the RAP developed by its youth services department qualifying for the sustainable communities section of the Tidy Towns Awards. Willum Warrain’s Reconciliation Walk starts at 11am from Pelican Park on the Hastings foreshore on Sunday 30 May. The walk ends at Willum Warrain in Pound Road with a flag raising ceremony, cultural activities, and a free family barbeque. Details: 5979 1391 or register at facebook. com/WillumWarrain The shire’s Reconciliation Action Plan is at mornpen.vic.gov.au/RAP