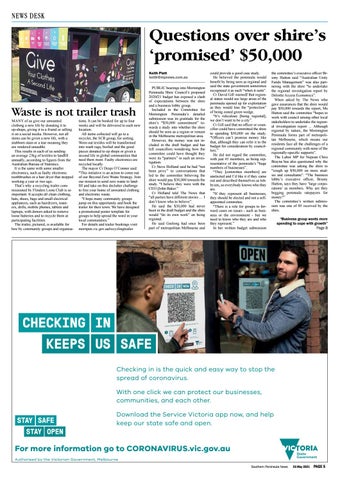 Waste is not trailer trash

MANY of us give our unwanted clothing a new life by donating it to op-shops, giving it to a friend or selling it on a social media. However, not all items can be given a new life, with a stubborn stain or a tear meaning they are rendered unusable. This results in each of us sending an average 23kg of textiles to landfill annually, according to figures from the Australian Bureau of Statistics. It is the same with some smaller electronics, such as faulty electronic toothbrushes or a hair dryer that stopped working a year or two ago. That’s why a recycling trailer commissioned by Flinders Lions Club is so important. It accepts all clean clothing, hats, shoes, bags and small electrical appliances, such as hairdryers, toasters, drills, mobile phones, tablets and laptops, with donors asked to remove loose batteries and to recycle them at participating facilities. The trailer, pictured, is available for hire by community groups and organisa-

tions. It can be booked for up to four weeks and will be delivered to each new location. All items collected will go to a recycler, the SCR group, for sorting. Worn out textiles will be transformed into wash rags, biofuel and the good pieces donated to op shops or given a second life in global communities that need them most. Faulty electronics are recycled locally. The mayor Cr Despi O’Connor said: “This initiative is an action to come out of our Beyond Zero Waste Strategy. Join our mission to send zero waste to landfill and take on this declutter challenge to free your home of unwanted clothing and electronic waste. “I hope many community groups jump on this opportunity and book the trailer for their town. We have designed a promotional poster template for groups to help spread the word in your local communities.” For details and trailer bookings visit: mornpen.vic.gov.au/recyclingtrailer

PUBLIC hearings into Mornington Peninsula Shire Council’s proposed 2020/21 budget has exposed a clash of expectations between the shire and a business lobby group. Included in the Committee for Mornington Peninsula’s detailed submission was its gratitude for the shire’s “$50,000 commitment” towards a study into whether the shire should be seen as a region or remain in the Melbourne metropolitan area. However, the money was not included in the draft budget and has left councillors wondering how the committee could have thought they were its “partners” in such an investigation. Cr Steve Holland said he had “not been privy” to conversations that led to the committee believing the shire would pay $50,000 towards the study. “I believe they were with the CEO [John Baker.” Cr Holland told The News that “all parties have different stories … I don’t know who to believe”. He said the $50,000 had never been in the draft budget and the shire would “do its own work” on being regional. He said Geelong had once been part of metropolitan Melbourne and

could provide a good case study. He believed the peninsula would benefit by being seen as regional and said the state government sometimes recognised it as such “when it suits”. Cr David Gill warnedf that regional status would see large areas of the peninsula opened up for exploitation as they would lose the “protection” of being zoned green wedge. “It’s ridiculous [being regional], we don’t want to be a city”. Cr Gill said that no officer or councillor could have committed the shire to spending $50,000 on the study. “Officers can’t promise money like that, although they can refer it to the budget for consideration by councillors.” He did not regard the committee, with just 45 members, as being representative of the peninsula’s “huge numbers of businesses”. “They [committee members] are unelected and I’d like it if they came out and described themselves as lobbyists, so everybody knows who they are. “If they represent all businesses, they should be elected and not a selfappointed committee. “There is a role for groups to forward cases on issues - such as business or the environment - but we need to know who they are and who they represent.” In her written budget submission

the committee’s executive officer Briony Hutton said “Australian Unity Funds Management” was also partnering with the shire “to undertake the regional investigation report by Deloitte Access Economics”. When asked by The News who gave assurances that the shire would pay $50,000 towards the report, Ms Hutton said the committee “hopes to work with council among other local stakeholders to undertake the regional investigation report ... Although regional by nature, the Mornington Peninsula forms part of metropolitan Melbourne, which means our residents face all the challenges of a regional community with none of the regionally-specific supports”. The Labor MP for Nepean Chris Brayne has also questioned why the committee was asking the shire to “cough up $50,000 on more studies and consultants”. “The business lobby’s executive officer, Briony Hutton, says they have ‘large corporations’ as members. Why are they begging peninsula ratepayers for money?” The committee’s written submission was one of 85 received by the shire. “Business group wants more spending to cope with growth” Page 8

CHECKING IN KEEPS US SAFE Checking in is the quick and easy way to stop the spread of coronavirus. With one click we can protect our businesses, communities, and each other. Download the Service Victoria app now, and help keep our state safe and open.