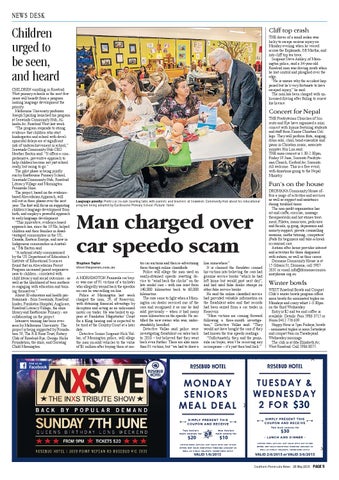 Children urged to be seen, and heard

THE driver of a small sedan was lucky to escape serious injury on Monday evening when he veered across the Esplanade, Mt Martha, and into cliff top tea trees. Sergeant Steve Ashley, of Mornington police, said a 34-year-old Rosebud man was driving south when he lost control and ploughed over the edge. “He is unsure why the accident happened but he’s very fortunate to have escaped injury,” he said. The man has been charged with unlicensed driving after failing to renew his licence.

Fun’s on the house Language priority: Professor Joseph Sparling talks with parents and teachers at Seawinds Community Hub about his educational program being adopted by Eastbourne Primary School. Picture: Yanni

Man charged over car speedo scam A MORNINGTON Peninsula car buyer was one of 91 victims of a trickster who allegedly wound back the speedos on cars he was selling on-line. Police at Mornington last week charged the man, 29, of Reservoir, with obtaining financial advantage by deception and acting as an unlicensed motor car trader. He was bailed to appear at Frankston Magistrates’ Court for a filing hearing and is expected to be tried at the Country Court at a later date. Detective Senior Sergeant Nick Vallas, of Mornington police, will allege the man on-sold vehicles to the value of $1 million after buying them at mo-

tor car auctions and then re-advertising them through online classifieds. Police will allege the man used an easily-obtained speedo resetting device to “wind back the clocks” on the late model cars – with one reset from 240,000 kilometres back to 60,000 kilometres. The ruse came to light when a Mornington car dealer serviced one of the cars and recognised it as one he had sold previously – when it had many more kilometres on the speedo. He notified the new owner who was, understandably, horrified. Detective Vallas said police were investigating fraudulent car sales back to 2010 – but believed that they went back even further. There are also more than 91 victims, but “we had to draw a

line somewhere”. It is claimed the fraudster conned his victims into believing the cars had genuine service books “which he had left home but would post next day”, and had used false dealer stamps on other fake service books. He said the online classified service had provided valuable information on the fraudulent sales and that records had been seized from a car trader in Reservoir. “More victims are coming forward following a three-month investigation,” Detective Vallas said. “They would not have bought the cars if they had known the true speedo readings. “Unfortunately, they, and the peninsula car buyer, won’t be receiving any recompense – it’s just their bad luck.”

DROMANA Community House offers a range of activities and services as well as support and assistance during troubled times. The non-profit organisation has art and crafts, exercise, massage therapies/reiki and hot stones treatment, Pilates, manicures, pedicures and facials, qi gong, depression and anxiety support, private counselling sessions, maths tutoring, computers/ iPads for beginners and take-a-break occasional care. Autism after hours provides interest and activities for those diagnosed with autism, as well as their carers. Dromana Community House is at 15 Gibson St, Dromana, call 5987 2631 or email info@dromanacommuniutyhouse.org.au

CHILDREN enrolling in Rosebud West primary schools in the next few years will benefit from a program making language development the priority. Melbourne University professor Joseph Sparling launched his program at Seawinds Community Hub, Allambi Av, Rosebud West last week. “The program responds to strong evidence that children who start kindergarten and school with developmental delays are at significant risk of underachievement in school,” Seawinds Community Hub CEO Heather Barton said. “It offers a comprehensive, preventive approach to help children become not just school ready, but raring to go.” The pilot phase is being jointly run by Eastbourne Primary School, Seawinds Community Hub, Rosebud Literacy Village and Mornington Peninsula Shire. The project, based on the evidencebased Abecedarian Approach, will roll out in three phases over the next year. The first will focus on supporting children’s language development from birth, and employ a powerful approach to early language development. “This innovative, evidence-based approach has, since the 1970s, helped children and their families in disadvantaged communities in the US, Canada, Eastern Europe, and now in Indigenous communities in Australia,” Ms Barton said. “A national study commissioned by the US Department of Education’s Institute of Educational Sciences found that an Abecedarian Parent Program increased parent responsiveness to children - correlated with child literacy and social outcomes - as well as the likelihood of teen mothers re-engaging with education and training themselves.” About 30 educators and health professionals - from Seawinds, Rosebud kinder, Frankston Hospital, Anglicare, Rosebud Literacy Village, the shire library and Eastbourne Primary - are collaborating on the project. Intensive training has been overseen by Melbourne University. The project is being supported by Foundation 59, The R E Ross Trust, Rotary Club of Rosebud-Rye, George Hicks Foundation, the shire, and Growing Child Mornington.