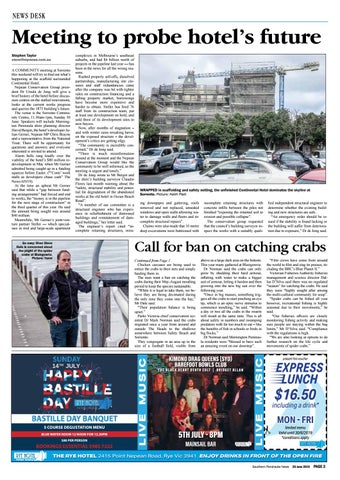 Meeting to probe hotel’s future Stephen Taylor steve@mpnews.com.au A COMMUNITY meeting at Sorrento this weekend will try to find out what’s happening at the scaffold surrounded Continental Hotel. Nepean Conservation Group president Dr Ursula de Jong will give a brief history of the hotel before discussion centres on the stalled renovations, looks at the current works progress and queries the 1875 building’s future. The venue is the Sorrento Community Centre, 11.30am-1pm, Sunday 30 June. Speakers will include Mornington Peninsula shire planning director David Bergin, the hotel’s developer Julian Gerner, Nepean MP Chris Brayne and a representative from the National Trust. There will be opportunity for questions and answers and everyone interested is invited to attend. Alarm bells rang loudly over the viability of the hotel’s $80 million redevelopment in May when Mr Gerner admitted being caught up in a funding squeeze before Easter. (“‘Conti’ work stalls as developers chase cash” The News 6/5/19). At the time an upbeat Mr Gerner said that while a “gap between funding arrangements” had forced and end to works, the “money is in the pipeline for the next stage of construction” in the third quarter of this year. He said the amount being sought was around $40 million. Meanwhile, Mr Gerner’s joint-venture partner Steller — which specialises in mid and large-scale apartment

complexes in Melbourne’s southeast suburbs, and had $4 billion worth of projects in the pipeline last year — has been in the news for all the wrong reasons. Rushed property sell-offs, dissolved partnerships, manufacturing site closures and staff redundancies came after the company was hit with tighter rules on construction financing and a falling property market; borrowings have become more expensive and harder to obtain. Steller has fired 76 staff from its construction team, put at least one development on hold, and sold three of its development sites to new buyers. Now, after months of stagnation – and with winter rains wreaking havoc on the exposed structure – the development’s critics are getting edgy. “The community is incredibly concerned,” Dr de Jong said. “There is much misinformation around at the moment and the Nepean Conservation Group would like the community to be well informed, so the meeting is urgent and timely.” Dr de Jong wrote to Mr Bergin and the shire’s building surveyor Claudio Flores last month warning about the “safety, structural stability and potential for degradation of the abandoned works at the old hotel in Ocean Beach Road”. “A member of our committee is a structural engineer who has experience in refurbishment of distressed buildings and reinstatement of damaged buildings,” her letter said. The engineer’s report cited “incomplete retaining structures, miss-

WRAPPED in scaffolding and safety netting, the unfinished Continental Hotel dominates the skyline at Sorrento. Picture: Keith Platt ing downpipes and guttering, roofs removed and not replaced, unsealed windows and open walls allowing water to damage walls and floors and incomplete structural repairs”. Claims were also made that 10 metre deep excavations were buttressed with

incomplete retaining structures with concrete infills between the piles not finished “exposing the retained soil to erosion and possible collapse”. The conservation group requested that the council’s building surveyor inspect the works with a suitably quali-

fied independent structural engineer to determine whether the existing building and new structures are safe. “An emergency order should be issued if the stability is found lacking or the building will suffer from deterioration due to exposure,” Dr de Jong said.

Call for ban on catching crabs

“Film crews have come from around the world to film and sing its praises, including the BBC’s Blue Planet II.” Victorian Fisheries Authority fisheries management and science director Dallas D’Silva said there was no regulated “season” for catching the crabs. He said they were “highly sought after among the multi-cultural community for soup”. “Spider crabs can be fished all year however, recreational fishing is highly seasonal due to their movements,” he said. “Our fisheries officers are closely monitoring fishing activity and making sure people are staying within the bag limits,” Mr D’Silva said. “Compliance with the regulations is high. “We are also looking at options to do further research on the life cycle and movements of spider crabs.”

above as a large dark area on the bottom. This year many gathered at Blairgowrie. Dr Norman said the crabs can only grow by shedding their hard armour, inflating with water to make a bigger suit of armour, letting it harden and then growing into the new big suit over the following year. “Once in big masses, something triggers all the crabs to start pinching an eye tip, which is an optic nerve stimulus to commence moulting,” he said. “Within a day or two all the crabs in the swarm will moult at the same time. This is all about safety in numbers and swamping predators with far too much to eat – like the benefits of fish in schools or birds in big flocks.” Dr Norman said Mornington Peninsula residents were “blessed to have such an amazing event on our doorstep”.

Continued from Page 1 Chicken carcases are being used to entice the crabs to their nets and simply hauling them in. The men want a ban on catching the crabs during their May-August moulting period to keep the species sustainable. “While it is legal to take them, we believe they are being decimated during the only time they come into the bay,” Mr Dale said. “Their population balance is being upset.” Parks Victoria chief conservation scientist Dr Mark Norman said the crabs migrated once a year from around and outside The Heads to the shallows somewhere between Safety Beach and Sorrento. They congregate in an area up to the size of a football field, visible from

Go easy: Diver Steve Dale is concerned about the plight of the spider crabs at Blairgowrie. Picture: Yanni